DAMIEN Duff was already the winner of one Premier League medal and well on his way to adding a second when he first spoke about retirement. At the time, there was talk of him moving on.

Liverpool wanted him. So too Arsenal. Eventually he'd head off in a different direction – the wrong one – and join Newcastle, but not before he let us all into a secret about his final ambition.

"I'll keep going till I'm no longer able to walk," Duff said. "It'll be over 35s, pub league stuff. If the Dog and Duck have a team, I'll play for them. Playing is what I love and I'll do it for as long as I can."

Nearly a decade on, that love affair with the game has taken him home. This week Duff – a two-time Premier League winner – will join Shamrock Rovers, the most high-profile signing that they, or any, League of Ireland club have made since Johnny Giles swapped the payroll of West Bromwich Albion to become the Hoops' player-manager in 1977.

You may wonder why. You may be a non-believer in League of Ireland football, the type of church that attracts a cult following, but you'd be missing the point. Duff isn't here on a missionary footing. If the Rovers' fanbase increases on the back of his presence, then so be it.

Damien Duff looks set to sign for @ShamrockRovers and will reportedly donate his wages to charity: http://t.co/lZkFIvsYXy

He's here because he's a homebird, because he's had his time abroad (to him England was always a stopover, never a destination) and because he wants to get as much out of his injury-ravaged body as he possibly can.

"I've never feared getting hurt," he once said. "The only thing I have ever worried about was not being able to play. That idea that you'd be away from the game, that you'd have no match to look forward to each weekend, that's what I dread."

His arrival is just the boost the club needs. More to the point, it is also the injection of hope the League of Ireland desperately requires. Aside from his evident quality, the biggest lift Duff will hand the league is from a marketing, rather than a playing, perspective.

His is a recognised name, one of only six Irishmen to win a century of caps, one of only six to win the Premier League. So the fact he will be plying his trade on Irish shores is a big-thing.

And the fact that there is a fair chance he will be upstaged every so often by younger, less heralded players, won't damage his reputation, but will enhance theirs. Praise from Duff for the Richie Towells, Andy Boyles, Patrick McEleneys will equate to brand endorsement.

Intriguingly, he will also get to see how the other half live. He'll quickly learn how some team-mates share digs, how some don't drive, how others can't afford a car. No longer will he be surrounded by sports cars and four-by-fours in the training-ground car-park. Instead it'll be nine and ten-year-old bangers.

Yet the boot of his car, like theirs, will have the same smell. In the League of Ireland, the players wash their own kit. You don't throw it on the dressing room floor and walk away, expecting someone else to pick it up. As a League of Ireland player, you literally get your hands dirty. Yet Duff being Duff, he'll enjoy it.

"I'm just dying to get playing again," he said a month ago. "I've missed it, missed that adrenaline rush you get from playing, missed that routine where your week is geared around match-day."

When he was rubbing shoulders with Frank Lampard, Didier Drogba and Jose Mourinho mid-way through the last decade, Duff was used to a lifestyle of private jets, five-star hotels, undersoil heating, masseurs, video analysts, cushioned seats, private hospital care and a £70,000-a-week wage. 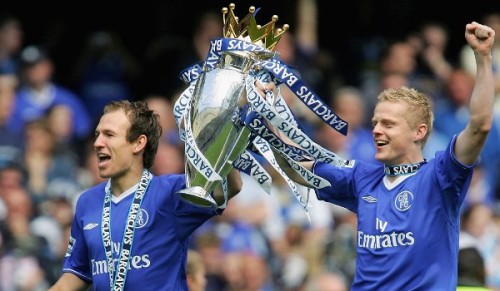 Now, some of the dressing rooms he will get changed in are barely big enough to fit in the starting XI, never mind the entourage who provided the team behind the team for Mourinho's Chelsea.

There will be just 500 people, if even that, watching some of his games. Many of the pitches won't be up to much. Referees won't offer him special protection. At times he may wonder what he has let himself in for.

But there will be nights when the noise will lift him, when Tallaght Stadium or Dalymount Park or Richmond Park or Turners Cross or Oriel Park will shake with the volume generated by the most passionate fans in Irish sport and he'll know he's made the right choice.