BY 1916, the GAA was already one of the largest organisations in Ireland and a significant number of members were involved in the planning and execution of the Easter Rising.

In the aftermath of the Rising, the vast majority of members would have classed themselves as constitutional nationalists in favour of home rule, much like greater Irish society at that time.

Approximately 302 players from 52 separate GAA clubs in Dublin alone were numbered among the rebels' force of 1,300 men and women, with St. Laurence O'Toole in the North Wall area of the city providing some 69 volunteers.

Indeed, at least five of the executed leaders of the Rising had a GAA background, although Central Council were keen to distance themselves from the activity, largely in order to keep the British government off their backs.

A statement released by the Association in May 1916 read:

Since the Gaelic Athletic Association is non-political, it follows that the members thereof are at perfect liberty to join any political organisation they may choose to be identified with. And hence, the Central Council finds that many members of the Association are attached to the United Irish League, All-For-Ireland League, Irish Volunteers, National Volunteers and various other national associations.

In other words, the men did not necessarily represent the views and values of the Association, they just so happened to be GAA men as well.

That statement came over a month after the Rising, at a time when Ireland was becoming increasingly radicalised by the intentions of the rebels, due to the deplorable reaction of the British Empire.

For their supposed role in the Rising, around 1,800 Irishmen were interned in Frongoch in North Wales alone, with many of the detained being wholly innocent, and Stafford Jail had it's fair share of political prisoners too.

British authorities conducted a campaign of harassment against the GAA in the weeks and months after the Rising and, despite their initial statement, the Association felt compelled to become actively involved in the welfare of those being held with a series of fundraising events.

But while in these camps, common ground among the Irishmen prevailed and helped them through. 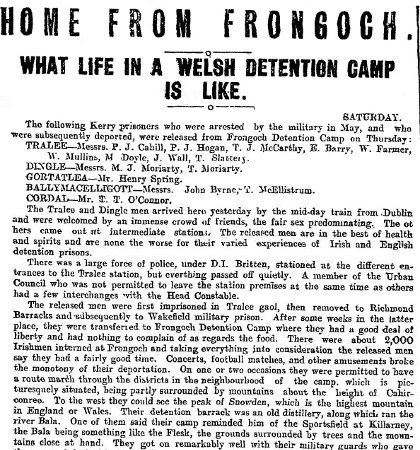 An article from the Kerryman on July 29, 1916 [Picture: The Collins Press]
Michael Collins, a former member of London GAA, helped to instigate a series of Gaelic football matches during his internment in Frongoch, along with Kerry's former All-Ireland winning captain Dick Fitzgerald.

As well as Fitzgerald, other inter-county players who were detained in Frongoch included Dublin trio Frank Burke, Frank Shouldice and Brian Joyce, while Kerry's Paddy Cahill and Seamus Dobbyn of Antrim were all in each other's company.

On any given day in Frongoch, large numbers of Gaelic football matches would be carried out on a makeshift pitch, which by all accounts was closer to a hill than anything. Nonetheless, the men made the best of what they had, forming one set of goalposts at the lower end of the slope.

In an almost child-like manner, they named their playing area 'Croke Park', an innocent touch to run parallel with many of their own peace of mind. The prison guards made no attempt to intervene, allowing the games to proceed as it clearly stimulated the inmates; physically, mentally, politically and culturally.

As participation grew, Collins and Fitzgerald organised four teams, three of which were named after the executed leaders of the rebellion.

Despite their predicament, the Irishmen still held on to their sense of humour, nicknaming Fitzgerald's team 'The Leprechauns' due to their small physical stature. But it was the Kerryman who had the last laugh, as his side won an organised tournament, in which each team played six games.

It's worth remembering, though, that the internment camps were not for punishment or rehabilitation – the inmates had 'prisoner of war' status and were only there to be contained, unlike their compatriots in Stafford Jail. 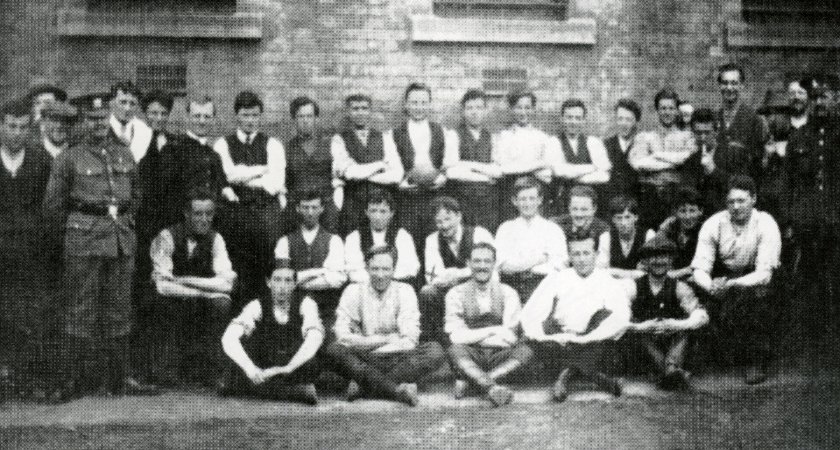 Most detainees in the internment camps were released between July and August of 1916, and the former inmates regularly met up to play games against each other in the ensuing years.

Once the Kerry natives among the Frongoch contingent were allowed to return home, the Kerryman reported on their return to the Kingdom.

A write up in the July 29, 1916, edition of the newspaper read: “The Tralee and Dingle men arrived here yesterday by the mid-day train from Dublin and were welcomed by an immense crowd of friends, the fairer sex predominating. The released men are in the best of health and spirits and are none the worse for their varied experiences of Irish and English detention prisons.

“There were about 2,000 Irishmen interned at Frongoch and taking everything into consideration, the released men say they had a fairly good time. Their detention barrack was an old distillery, along which ran the river Bala. One of them said their camp reminded him of the Sportsfield in Killarney.

“They got on remarkably well with their military guards who gave them a good deal of latitide. But romantic scenery and friendly guards did not make them perfectly happy. The desire to be back once more amongst their relatives and friends – the call of the Motherland – was always with them.”

Read an extract from Gearóid Ó Tuathaigh's new book on the GAA and the Irish Revolution. https://t.co/hVkjNrFjKC pic.twitter.com/02dJTpzWvc

VIDEO: Drone footage captures one of the best 1916 commemorations you’re likely to see