DUBLIN, IRELAND - NOVEMBER 30: Denise O'Sullivan of Ireland celebrates with team mates after scoring her side's sixth goal during the FIFA Women's World Cup 2023 Qualifier group A match between Ireland and Georgia at on November 30, 2021 in Dublin , Ireland. (Photo by Oisin Keniry/Oisin Keniry)

DOUBLE FIGURES in football are not something you'll see often in football, if you watch it frequently. Last night however Ireland decided to put 11 past minnows Georgia at the Tallaght Stadium.

Ireland were dominant throughout the game and finished the game with goals from Saoirse Noonan, Lucy Quinn, Amber Barrett, Megan Connolly, Kyra Carusa, a brace from captain Katie McCabe, and a hat-trick from Denise O’Sullivan to cap off a historic night for Vera Pauw's side.

This result represents the biggest win for any Ireland team (men's or women's) at senior level. It beats the 9-0 mark previously set by the Women's National Team against Malta and Montenegro in 2003 and 2016 respectively. 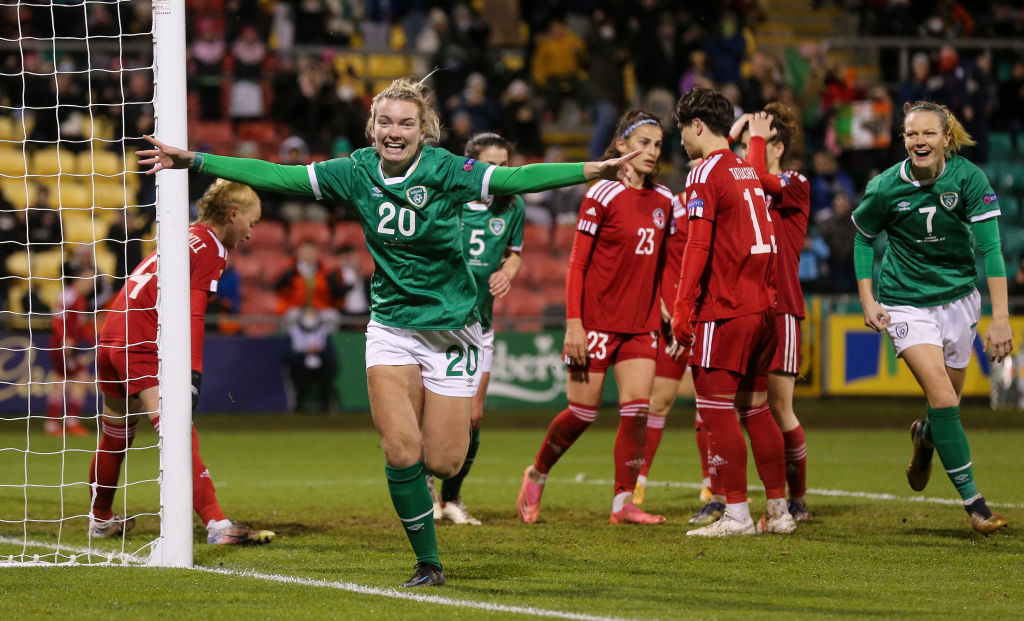 Ireland jumped to second in the World Cup qualifying group after boosting their goal difference significantly.

This was a huge contrast to Ireland's scoreless draw at home to Slovakia in the previous game.

Vera Pauw however has asked UEFA to act to address the imbalance between sides and believes a two-tier system needs to come back. This comes after England also beat Latvia 20-0 in another fixture and other high scores were recorded on a bizarre night.

We (previously) had a two-tier system and it's time to bring that in again...

I warned UEFA before that there are a lot of opportunities for the top-level teams, the top-level countries and they are drifting away from the rest.

It's great that the game develops at that level, but UEFA has to create for the - I’ve spoken about that before - the second tier and the tier under to gain more experience and more opportunities to train with each other so that we can close the gap.

In this way we cannot close the gap...

I’m sorry for Georgia but we need to think of our goal difference and that is why we didn’t make a party of it, we kept going.

"It was an absolutely brilliant performance from everyone, even the impact the subs made in the second half, we kept up the standard and intensity right throughout," said McCabe.

"Setting a record scoreline here tonight in Tallaght with all these amazing fans that came to see us in the wind and rain, it's an absolutely brilliant night.

"A few of us were around for the 9-0 win against Montenegro when Steph and Áine both got hat-tricks. When we hit nine, I kept telling the girls to push for more. They were absolutely brilliant with their discipline throughout the game, the positioning, it was a really good performance."