In life and in death, Jim Stynes remains a true hero

IT was Christmas 2010 when I first heard about Jim Stynes’ battle with cancer. RTÉ broadcast a documentary about his life. Every Heart Beats True had everybody talking.

We watched as a family. The story of Stynes was remarkable, thought-provoking and uplifting. It combined a seminal sporting career with a struggle for life that was epic and a positive attitude on the same scale.

The documentary was profoundly moving. I felt compelled to share his story and later I tried to email the video file to a friend. The action crashed my computer. Not to be defeated, I bought a copy of the documentary and sent it by post.

She watched it twice. We talked about it lots.

I always thought he was going to make it. He was the kind of sports star who overcame big odds to make it; the type of person who could re-enter his own farewell party and tell those present that he “must be Lazarus” after a surgeon unexpectedly phoned to say he had months rather than weeks to live.

By the time of that premature farewell, Stynes had undergone major surgery to remove more than 20 cancerous tumours, many of them from his brain. This time the odds were overwhelmingly against him but he kept on keeping on.

He dedicated himself to getting better. He adopted a recovery programme that combined the healing powers of meditation with drinking his own urine for the vitamin kick. Because in football and in life, Jim Stynes gave himself every chance to win.

He said his attitude didn’t start out like that. Jim Stynes left Dublin after winning a minor football title, had no experience of AFL, but went on to become one of the game’s greatest exponents.

During his career he won the Brownlow Medal — the game’s most prestigious accolade — four Melbourne Best and Fairest awards and famously played in 244 consecutive matches for Melbourne, a staggering record of endurance that still stands today. 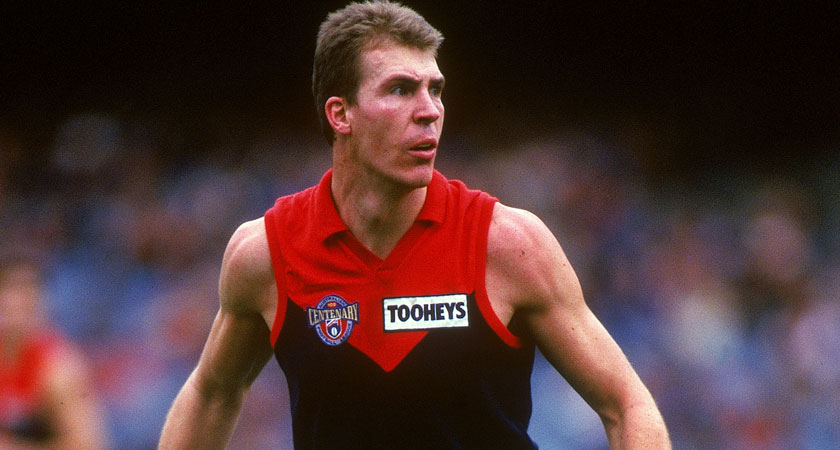 Jim Stynes in action for Melbourne in 1996 (Image: Getty)

All this was achieved after Stynes, the rookie, cost Melbourne their first real chance of winning a Grand Final in 1987. He fouled the last play of the game. It was an error he was vilified for; but something he said later that steeled his resolve and set him on the stellar path to success.

Those sporting successes made him our ambassador out in Australia.

Remarkable as all those achievements were, and still are, they were but one side to Jim Stynes. His career earned him huge respect and wide acclaim but it was in life and not sport that Stynes really earned the label of inspiration.

I can think of no better example of an attitude to life which paused your thought then got you moving towards a better day. Because you couldn’t but be affected by the story of Jim Stynes; you’d read about the generosity of his spirit but the depth of his courage left you feeling sad and at the same time uplifted.

In the documentary Every Heart Beats True, Jim Stynes said he lost the ego of a major sports star once he was diagnosed with cancer and ironically that led him to a better life. 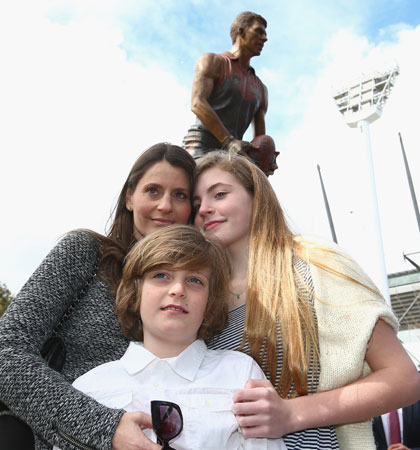 Jim Stynes' wife Samantha, daughter Matisse and son Tiernan at the 2014 unveiling of statue in his honour at the Melbourne Cricket Ground (Image: Getty)

It was quite a thing, because by then Stynes had already founded the Reach Foundation — a charitable organisation which promoted mental health and well-being among young people. He suggested it was part of his destiny and all the while he advanced the fortunes of Melbourne Football Club. He was president by then, what else?

In a world where gushing labels are used too freely, Jim Stynes was an exception. He was the teak-tough sports star, a real legend with a vulnerable side that he used to help others grow and fulfil their potential. His courage, like his empathy, appeared bottomless.

Stynes didn’t just touch the lives of others — he went further, grabbing thousands of people by the hand and leading the way.

Martin Flanagan, a journalist in Melbourne, once said that if Stynes is credited with vision then it was much greater than himself. Because right to the end, a remarkable life lived by a son of Dublin on foreign shores was about living for other people.

He was a father and a husband, an emigrant who overcame long odds to prosper and thrive; he was once a great footballer and for that he will always be remembered, but always it seems he was a great person.

I never met Jim Stynes, but to know his story is to appreciate words like courage, resolve, dignity, respect and the power of positivity. People wonder about his connection but that bit is simple, it was how he lived.

Stynes passed away on March 22, 2012 and was afforded the honour of a state funeral in his adopted city of Melbourne, after which someone said his story was the greatest ever told in Australian rules football.

You know what, it’s far more significant than that.

Because in so many ways Jim Stynes made it like nobody else could.