Matthew Macklin on his toughest opponent, why he never fought Andy Lee and his hurling history

FOR Matthew Macklin, the writing was on the wall the moment he started putting greater focus on making weight than the man he was about to step into the ring with.

After bouncing back from 2014’s heartbreaking defeat to Jorge Sebastian Heiland in Dublin with knock-out wins over Sandor Micsko and Chris Hermann, the Birmingham-Irish fighter’s attention drifted away from his game.

Opting to drop down to super-welterweight to fight Jason Welborn – in a division he hadn’t fought in since 2006’s barnstormer with Jamie Moore – Mack The Knife’s task of shredding down the pounds became his biggest challenge, or so he thought.

Underestimated and determined to make his mark against a big name, Welborn took Macklin the full 10 rounds in a very competitive fight, and although he dropped a unanimous decision, the underdog sowed the seeds of doubt in his opponent’s mind.

Even at that late stage of his career, it reminded Macklin never to look past an opponent, and so he entered what would prove to be his last bout against Brian Rose with greater care, but with thoughts of retirement lingering.

“I had a couple of knock-over wins before the Rose fight, but the question was whether or not I wanted to do it anymore,” he told The Irish Post. “For the Jason Welborn fight, I was concentrating more on making weight more than the actual fight. For the life of me, there was no way I could see him beating me.

“You like to think of yourself as being professional, but complacency creeps in subconsciously. When you’re fighting someone who you feel is no threat to you, it’s hard not to look past them.”

He certainly wasn’t looking past Rose, telling the media that anything other than a win would result in his immediate retirement. As it happens, he won a majority decision and as far as we were aware, the quest for that elusive world title would continue.

“I told myself ahead of the Rose fight that, whatever happens, I’m going to enjoy the night, and thankfully I did. I enjoyed the build-up, the weigh-in and then I won the fight,” he added.

What we didn't know was that Macklin's mind was finally made up mid-way through the Rose fight, he just wasn't quite ready to announce it to the world. When he was, it came in the form of an emotionally charged, 1,600-word statement that was as brutally honest as his ring generalship. 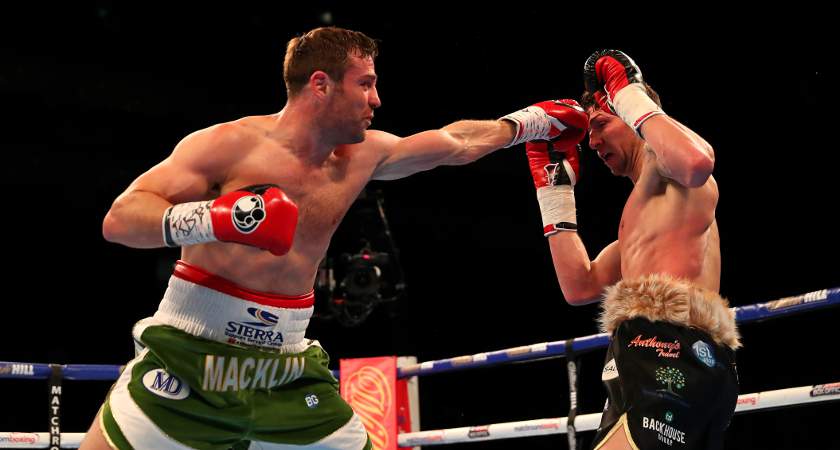 Macklin, left, in action at The O2 Arena on April 9, 2016 in London, England [Picture: Getty]
So significant was Macklin's announcement, it made headlines and sizeable column inches on the likes of Ring Magazine in America – the Bible of Boxing since 1922 – Boxing News, Britain's equivalent, as well as RTÉ, this very paper and many more in between.

Thankfully, there was no sob story, just the open words of a man who counts himself lucky to have enjoyed a fruitful career that saw him crowned Irish, British and European champion, while he mixed with the best in one of the strongest divisions amid three unsuccessful world title shots.

Felix Sturm (Germany) and Sergio Martinez (Argentina) are god-like figures in their home countries, but neither man ranks as Macklin’s toughest ever opponent. That accolade goes to Gennady Golovkin, the current WBA, WBC and IBF world middleweight champion from Kazakhstan.

“Without a doubt,” said Macklin, when asked if a man who has a frightening 91 per cent knock out ratio from his 35 fights is the best he's ever faced.

“I knew that going into the fight anyway because I’d boxed in the World Junior Championships in 2000 and he boxed in them a weight below me. He won the gold medal and was named the best boxer at the tournament as the stand-out fighter.

“I had my eye on him ever since then. I thought our paths might cross in the amateurs – I beat a guy who beat him, Eduard Gutknecht – but then I turned pro after winning the ABAs here in England. Our paths went different ways but then they came back in time.” 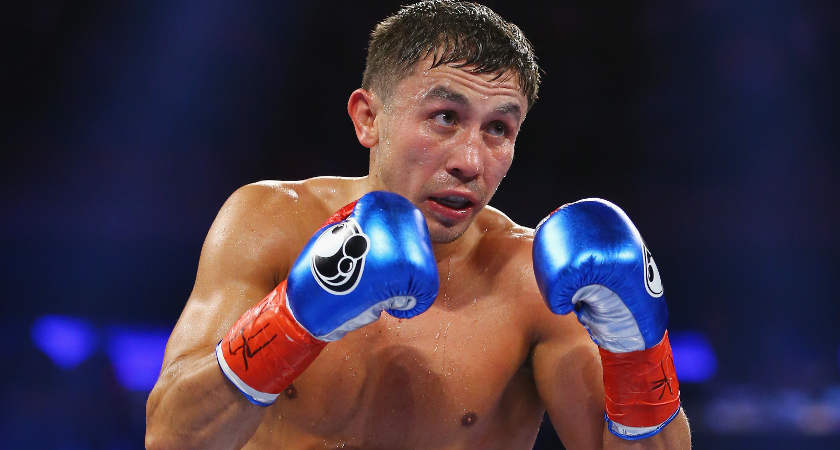 Gennady Golovkin has gone on to greater things since beating Macklin [Picture: Getty]
As he does with most of his opponents, Golovkin made light work of Macklin – crippling him with a fierce body shot in the third round – making Mack The Knife one of 22 consecutive victims of his knock-out power.

“It’s a sport, but it’s a business as well, and it’s about securing your future, and that was one of those fights that did that. It doesn’t surprise me that he’s gone on to be what he is. I always knew he was going to be a superstar.”

These days, Golovkin is on a collision course with Mexican powerhouse Saul 'Canelo' Alvarez, the most anticipated fight in the sport right now.

To put Macklin's stock into perspective, an offer came in from Golden Boy Promotions to fight Alvarez next. However, knowing his best days were already behind him after beating Rose, he declined the offer of one last big pay cheque in favour of retiring on a win, and in good health.

Canelo is not the only high profile middleweight Macklin never got his mitts on – Darren Barker is another that never materialised, regrettably – but the big one that got away was the much-mooted but never plausible bout with fellow British-born Irish native Andy Lee.

“It was put to me a few times, and I accepted it, but for whatever reason it just never happened,” claimed Macklin. “I'm sure Andy believes on top of his game he would have beaten me and likewise on top of my game I believe I would have beaten him. It's just a shame, when I was flying, he wasn't, and when he was flying, I wasn't.”

Born in Birmingham to a Roscommon father and Tipperary mother, Macklin’s Irish heritage earned him numerous nicknames, such as the Roscommon Rock and Tipperary Tornado, but they’re not just catchy names, the 34-year-old is immensely proud of his roots.

During his time working under famed Manchester-Irish trainer Joe Gallagher – ‘the most hard-working trainer I’ve ever met’ – their common ground helped strike a chord and fine-tune Macklin’s mental strength.

“Joe was born here to a Sligo mum and dad and goes back all the time,” he said. “His sisters and his dad are living back in Ireland now. We both grew up in a similar situation. He was on the building sites with his dad when he was young and, likewise, I was doing a bit of tunnelling with my old man when I was 16. So I could certainly relate to him and he could relate to me.

“But I could relate to him in a boxing sense too. He didn’t teach me too much about boxing, but my head was right under Joe, I had the right emotional balance going into a fight. The right belief, the right confidence, and I think that’s why I had such a connection with Joe.”

Pictures of Macklin donning a Tipperary jersey aren’t hard to come by – photoshoots for any of his six pro fights in Ireland ensured that – but it’s a little known fact that he played underage inter-county hurling for the Premier County in 1997.

The tale of how he fell in love with the sport and became good enough to represent one of the elite counties is one best left to his own words.

“I played hurling from the age of five or six,” he said. “It started in the living room with my dad. My dad was from Four Roads on the Galway border – he went to school in Ballygar – and Four Roads is an out-and-out hurling club. He was always a massive hurling lover, and my dad was like my hero, so when we’d go back to Ireland I’d go to matches with him and we’d hurl on the beach.

“Then my mother’s side of the family are from Holycross in Tipperary – we’d go there in the summer as well. In 1988 or 1989, my dad was working in the Channel Tunnel and we went down to Dover for four weeks to stay in a caravan for our summer holidays.

“In the caravan across from us was Mick Lyons, his wife Julie and son Keith, who is a similar age as me. Mick – from Ballingarry, Tipperary – played hurling for London for years, he was a couple of years younger than my dad and our families became friends. 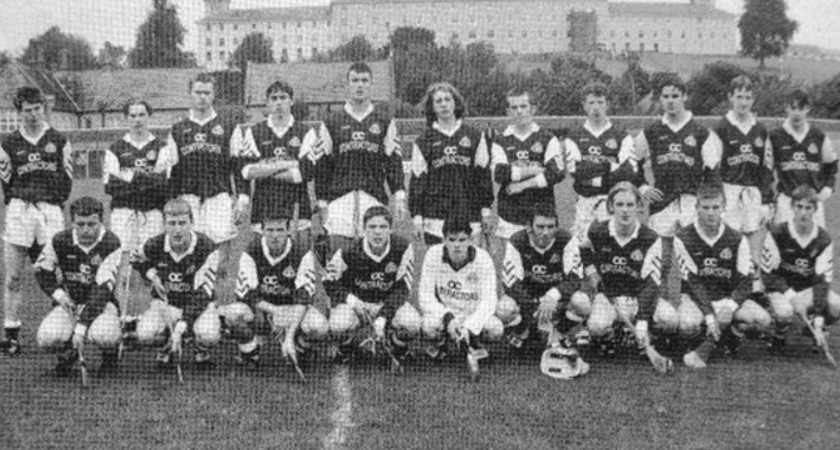 Macklin, fourth from left in the front row, pictured with the South Tipperary Minor 'A' hurling champions, 1997 [Picture: Matthew Macklin]
“The following summer, we were back in Ireland in Tipperary, and we went to Ballingarry to stay with Mick’s family for the night and had the craic. Anyway, I wanted to stay, and my dad said ‘ok’ – I ended up staying for six weeks! After that, I went to Ballingarry every summer and started playing for the local club from the age of 10, playing all the way up to Under-16s.

“I even played Under-21 when I was only 15. In 1997, I played for Tipperary. I got picked the year before but in the end I couldn’t play because I’d already played for Warwickshire the same year.

“But when I came back in ’97 I finally played for Tipp against Cork in Waterford. At the end of that year, when September came around, I went back to Birmingham for school but the club flew me out to play in their south final against Mullinahone, and we beat them.

“They had Eoin Kelly, Paul Kelly and Paul Curran – all three went on to play senior for Tipp, but we beat them. The county semi-final was a couple of weeks later and they wanted to fly me back again, but as it worked out, I was boxing on the Saturday night in Leitrim for a Birmingham select side.

“Martin Maher, who was one of the selectors, drove up to Leitrim, watched me fight, then drove me back through the night back to Tipperary, and the next day we played against Golden, but we lost.

“When you’re only 15 and you’re being flown over for a final, you have to be pretty good!”

Sean McDermotts is the Macklin family’s club in Warwickshire, although he hurled for John Mitchels in his earlier years before McDermotts had a youth team, but despite his hurling prowess, there are no plans to return to the club scene.

Instead, he’ll help out his brother Seamus in training Birmingham’s next generation in boxing, the sport in which his legacy of fearlessness, determination and work-ethic is assured.