Ireland v New Zealand: Ireland made history in Chicago, but now that is just history

WHATEVER about 111 years seeming like a long time, the fortnight separating Chicago from the Aviva, and the All Blacks from a shot at revenge, will seem like an eternity to New Zealanders.

With their pride as well as their bodies bruised from their 40-29 defeat to Ireland in Soldier Field, the reigning world champions arrive in Dublin this weekend with only one thing on their minds.

“New Zealand teams don’t like losing once, never mind twice,” Justin Marshall, the former All Black scrum half said in the aftermath of the Chicago game. “Seeing how the second test unfolds will sure be interesting.”

And it will also be a measure of where Ireland really stand. For while last week’s victory will never be forgotten, a truer measure of a team’s maturity is when they can deliver back-to-back scalps.

“Managing expectations is something we are going to have to address,” Joe Schmidt said in the aftermath of the Soldier Field win.

He allowed his words trail off, as if to strengthen the point he was making. Remembering the hype that built following Ireland’s victory over France, Schmidt then saw the emotional pendulum swing the other way after defeat in the quarter-final to Argentina. What he is striving for then is for his players to find the correct balance between self-belief and self-absorption.

The only change to the starting XV that won in Chicago is Sean O'Brien coming in for the unfortunate Jordi Murphy following his long-term lay-off, so the self-belief should be there at least.

In Chicago, Schmidt devised a plan to frustrate the All Blacks, instructing his players to guard possession jealously, reminding them that the best means of defence was to constantly attack.

Scoring five tries in one game – the same number New Zealand conceded in their six Rugby Championship games this season – illustrated the willingness of this team to go on the charge, which was what they continued to do, even when New Zealand had rattled off three tries in quick succession to reduce a 22-point lead to just four.

“When you look at New Zealand and what they’ve done, you try and learn from that,” said Simon Easterby, the Ireland forwards coach. “They won 18 matches on the trot and it wasn’t with 6-3 or 9-6 scorelines. They’ve done it by going after teams, especially in the second-half of games.

"They have the ability to shift through the gears so in Chicago, we knew we couldn’t sit back and defend a lead. That would have caused us more harm than good. We had to keep going after them and that’s why we managed to score points off the back of good defence and the ability to keep chasing things.”

Knowing they now have the ability to win – on 28 previous occasions over the course of 111 years – they lacked that killer instinct, Andrew Trimble is determined to use the match as a focal point for future glory.

“When they scored early on, don't get me wrong, that mentality is not perfect. There are doubts,” Trimble said. “They score [a try] after three minutes and you are wondering are you going under the cosh for the next 80 minutes. [Thinking] This could unravel here. 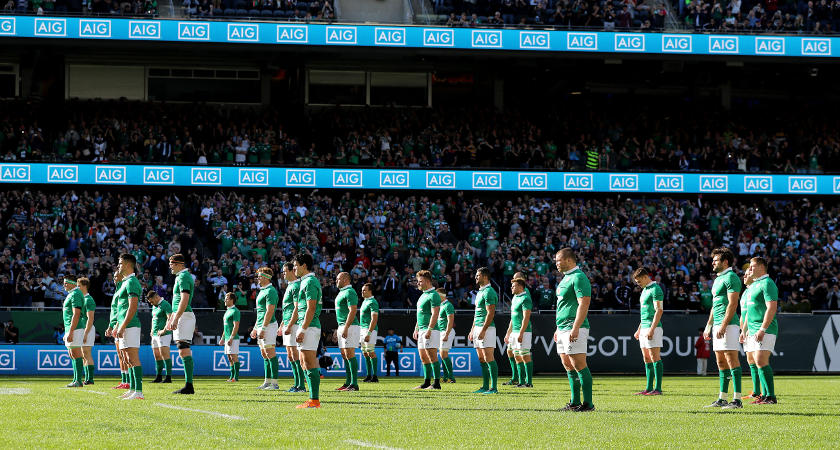 The Ireland team will face the Haka once more [©INPHO/Dan Sheridan]
“But we showed that mental fortitude to step up and take ownership of the game. That is something we are very proud of. At half-time, everyone is thinking the same thing; 'This is going the same way it did before'. It's very tempting to pay that lip service, for it to be a cliche, 'keep positive, keep attacking them, keep going at them', but in the back of your mind you are going 'Please, can we just hang in for 40 minutes?

“So it is significant that we had a number of leaders who stood up and made crucial tactical decisions. Rory Best, Johnny [Sexton], Conor [Murray] were brave. We went at them and called plays that were going to make us uncomfortable,” Trimble said. “Because if you get them wrong, you are under the cosh. But it paid off in the end.”

“When they got their purple patch, we came back under the sticks and thought about the Aviva in 2013 when we were under our sticks after losing the game,” said Rob Kearney.

"You learn from those experiences and because we went to the edge once, we decided we didn’t want to go back there."

Nor do they want to revisit the old days this weekend. They made history in Chicago but now that is history.

“We live in a world where if you don’t keep looking forward then you get left behind,” said Rory Best, the Ireland captain.

So he is intent on adding another scalp to his list, having already become the first Ireland captain to lead a team to victory on South African soil and now the first to record a win against the All Blacks.

New goals, though, are being set. Why beat them once when you have the chance to do so twice?

That is the plan. The only trouble is, there are 15 New Zealanders who have other intentions.