NOT A bad side at all.

While the natural progression for any young Irish footballer is to go to England and ply their trade, it's becoming more and more common that young Irishmen look passed the conventional route to footballing success.

And there are some really talented Irish players now scattered across the world, from Ireland to Los Angeles.

So here is our best Starting 11 made up of players who aren't playing their football in England.

In goal we've gone with James Talbot, a young keeper who tried to break into a Sunderland side that saw Jordan Pickford chosen ahead of him. Since then, he has played excellently for Bohs in Ireland, even earning himself a callup to the international side.

In front of him are three defenders - Dan Casey, Derrick Williams and Joe Shaughnessy all have a lot to offer, with the first two both doing well in America so far.

Meanwhile, Joe Shaughnessy is one of many Irish players who have had a very good season at St Mirren in Scotland.

The remaining players are all so exciting that we genuinely wouldn't be annoyed to see an actual Ireland team lineup with them involved.

While some of them will be playing out of position, a front line of Danny Mandroiu, Jack Byrne and Jamie McGrath would be one of the most fluid and most exciting sides one could imagine.

The first two have lit up the League of Ireland regularly, though Byrne is currently in Cyprus, while McGrath has had a truly extraordinary season in Scotland, and will surely be getting a big move this summer.

Across the middle we'd have Conor Noss and Josh Cullen. Cullen has established himself as a regular in the Ireland squad, while Noss is one for the future.

He plays for Borussia Monchengladbach in Germany, and has made the Bundesliga squad on a number of occasions, while also impressing for Ireland's underage squads.

Out wide you have Jake Mulraney who is settling in very well over in America, while Ryan Johansson has to make the team purely based on the great news this week that he is eligible to play for Ireland.

He represented Luxembourg at U21 level but indicated his preference was to play for Ireland, and thanks to some new rules introduced by FIFA, he got the all clear this week. Get in!

Here's how our side would lineup: 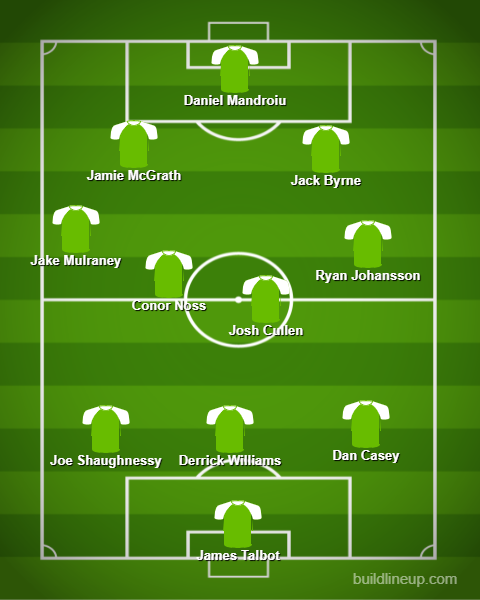