JASON SMYTH became Ireland's first gold medalist of the 2016 Paralympic Games in Rio with a storming performance in the T13 100m final.

The Derry native cruised to victory with a time of 10.64, just 0.16 off his personal best, with Namibia's Johannes Nambala second (10.78) and Chad Perris of Australia picking up bronze with a time of 10.83 – both regional records for Smyth's rivals.

The win completes a hat-trick of Paralympic golds in the event for Smyth, having won in Beijing in 2008 and London 2012, and it brings his Paralympic gold medal haul to five, having also also picked up gold in the 200m event in the last two Paralympics.

Unfortunately for Smyth the 200m race will not be taking place at the Rio Paralympic Games so he'll have to be content with just the one gold this year. 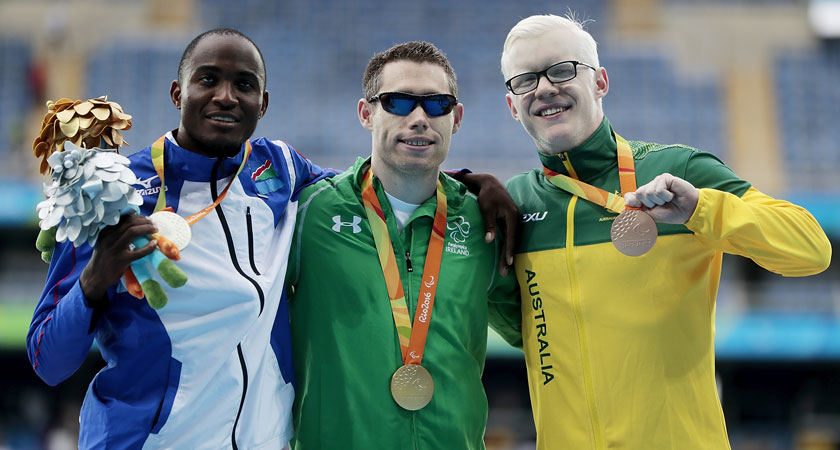 Smyth with fellow medalists, Namibia's Johannes Nambala and Chad Perris of Australia [Image: Getty}
There was disappointment however for Katie-George Dunlevy and her pilot Eve McCrystal in the Women's Individual Kilo B Time Trial, where they finished seventh with a 1:12.332.

British pair Sophie Thornhill and Helen Scott took gold in the event with a Paralympic record of 1:06.283.