IF revenge is a dish best served cold then New Zealand certainly picked the right day to deliver it, as temperatures neared freezing and tempers reached boiling point.

Sam Cane and Malakai Fekitoa were both cited for indiscretions, Cane for a brutal challenge on Robbie Henshaw, Fekitoa for a tackle on Simon Zebo that was higher than a pot-smoker in 1970s San Francisco.

And the cynicism didn’t end there. As New Zealand mastered the dark arts, straying offside judiciously whenever Ireland seemed set to score a try, they managed to control the game even without the ball. Why else would Joe Schmidt indirectly praise them afterwards by saying ‘sometimes it’s prudent to just give up a penalty'?

By the end they’d given up 14 of them. Plus two of their players, Aaron Smith and Fekitoa, spent time in the bin. Yet when playing against 14 men for 20 minutes, Ireland could only muster three points.

And so after the glory of Chicago, reality returned to Ireland’s doorstep. New Zealand are the number one side in the world for a reason – and the evidence was apparent on Saturday when slick handling, patient team building and sensational defending proved too much for an Irish side who are on their way to being one of the world’s best sides, but who have a fair distance still to travel before they reach their destination.

“I like them as a team,” Steve Hansen, the All Blacks coach, said afterwards. “They’re strong in every department and have showed that over these two Tests. What’s also admirable is the way they speak about wanting to improve and wanting to learn. That’s commendable.” 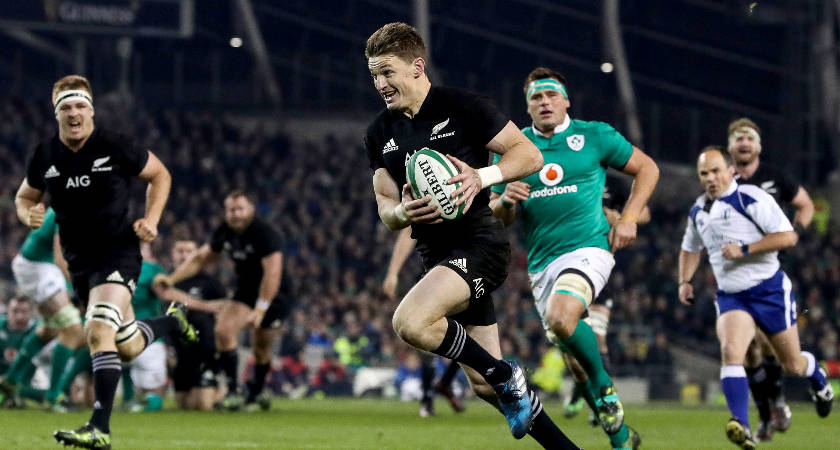 New Zealand’s Beauden Barrett on his way to scoring a try [©INPHO/Tommy Dickson]
So were so many other things: their work rate, bravery, scrummaging, ability to retain possession (by the end they had 67 per cent of the ball) and refusal to panic even when reduced to a 14-3 deficit after 14 minutes. “I’m very proud of the effort the boys put in,” Schmidt said. “They’re gutted to lose but they know they did well.”

Still, there were things they could have done better – and need to improve upon this Saturday when Australia come to the Aviva. To start with, supplying support lines in attack should be number one on their list – after both Josh Van der Flier and Jared Payne made clean breaks in the second half of Saturday's game before finding themselves isolated in the company of black-shirted defenders.

“Had we been better in a few areas, it could have been a different scoreline altogether,” Garry Ringrose, the 21-year-old centre said. “We'll go away and analyse where we could be better, there's a huge focus on that, because we talked in the dressing room about it, we can't rest on our laurels and be disappointed with a huge match next week against Australia. We're going to work hard to right a few wrongs.”

Working hard has become part of this team’s DNA. Those who do get their rewards. Those who don’t play for their provinces, which was where Simon Zebo found himself during the successful 2014 Six Nations campaign until the penny dropped and he realised he had to conform to Schmidt’s manifesto.

His progression from slick finisher to industrious team player is a microcosm of where Ireland are right now under their Kiwi coach. They are a side who can do a bit of everything and while the manner of Saturday’s defeat was a painful pill to swallow, if they are able to respond on Saturday with a victory over the Wallabies then there is a case to be made that they are the world’s second best team on current form.

Yet it isn’t just a good team Schmidt wants to develop. A good squad is what he really craves with the memory of that World Cup quarter-final loss to Argentina continuing to haunt. “We were down bodies (Paul O’Connell, Jared Payne, Johnny Sexton, Sean O’Brien and Peter O’Mahony) and it hurt us,” Schmidt said. “So we have to be ready if that sort of thing happens again.”

Ireland suffered multiple injuries against France in the World Cup and couldn't cope [Picture: Inpho]
A year on, it’s clear they are. O’Connell has gone for good – and yet the two All Black tests highlighted the depth in the second row, where Devin Toner is a more vocal presence, and Donnacha Ryan, Ultan Dillane and Iain Henderson all comfortably fit into Schmidt’s plans.

A year ago Dillane and Ringrose weren’t capped. Nor were Josh Van der Flier, the flanker, or Joey Carbery, the out-half. All four players – as well as Henderson, Tadhg Furlong and Robbie Henshaw – are 24 or younger.

On top of that, Paddy Jackson is a much better player now than he was in the World Cup. And that’s before we mention CJ Stander, who wasn’t eligible for Ireland until this year’s Six Nations – or for that matter, O'Mahony, who has played just once for Ireland since his injury against France last October.

Clearly the squad, as well as the team, are on the right path. “There is a young core coming through,” Furlong said. “We are all gaining experience and belief. Put it this way, I definitely wouldn’t be afraid of New Zealand. They went on an 18-game unbeaten run beating some of the best teams in the world week in, week out. That’s the standard we aspire to and Saturday showed we could mix it with the best of them. If you gave us a crack at them next week to see who’d win 2-1, I’d definitely enjoy that.”

Instead it’s Australia standing in their way – a more than capable understudy.