Jason Foley of Kerry jumps over Ian Burke of Galway as Damien Comer of Galway and Peter Crowley of Kerry look on during the GAA Football All-Ireland Senior Championship Quarter-Final Group 1 Phase 1 match between Kerry and Galway at Croke Park, Dublin. (Photo By Piaras Ó Mídheach/Sportsfile via Getty Images)

Kerry defender Jason Foley knows the Kingdom will need to tighten up defensively if they are to overcome Mayo this weekend.

The Kingdom won by three points against Munster rivals Cork back in June.

But the three goals conceded that afternoon will have raised fears in some quarters that last year’s defensive frailties haven’t been adequately addressed.

Mayo come into this game full of confidence, having seen off the challenge of Galway last weekend in a thriller.

Two early James Carr goals set them on their way in Limerick. And Foley hopes that lessons have been learned by his side from the Cork match. 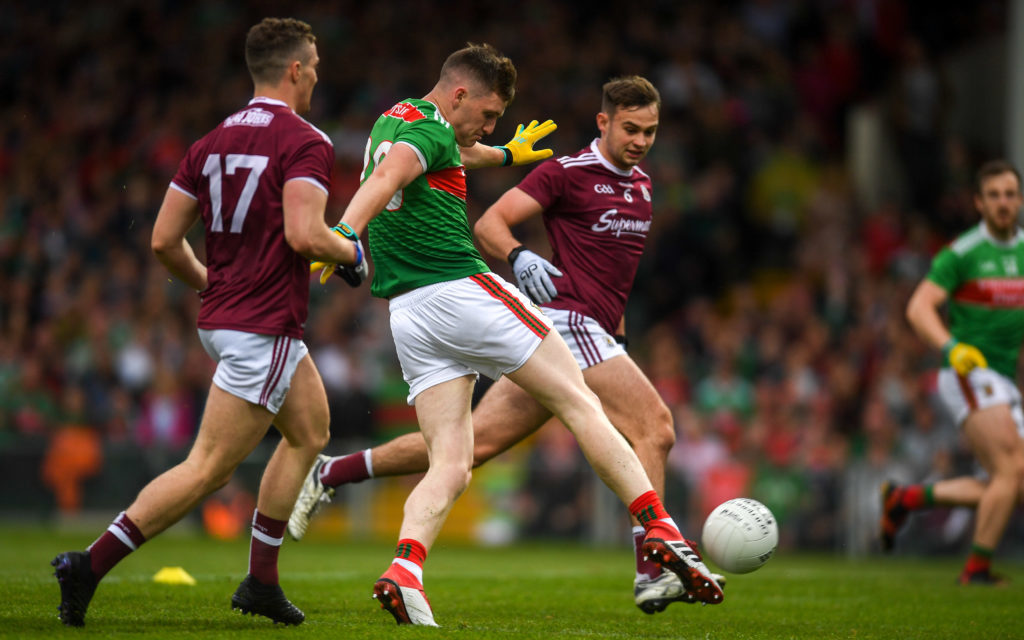 James Carr of Mayo scores his side's second goal of the game during the GAA Football All-Ireland Senior Championship Round 4 match between Galway and Mayo at the LIT Gaelic Grounds in Limerick. (Photo By Eóin Noonan/Sportsfile via Getty Images)

“No team likes to be conceding three goals in any game so Donie [Buckley], Tommy [Griffin] and Peter [Keane] have been working really hard with us in training to put those things right,” he told the The Kerryman.

"We were very well defensively set up in the earlier part of the year but things happen in games.

“Sometimes you're going to concede goals in games. The opposition we've faced in Munster this year - Cork and Clare - have brought serious, serious stuff. And you can see they're on the brink of making some breaks as well. You have to give those teams credit. We'll work on it and hopefully put things right."

The big games will come thick and fast for the Kingdom now. After Sunday’s game in Killarney, they will face in-form Donegal at Croke Park. It would be a daunting prospect for players far older than Foley’s 22 years.  But the Ballydonoghue clubman is embracing the challenge.

"It's obviously going to be very tough in a neutral venue. That's what you strive for, playing in Croke Park. And if you win there, even better.

"The new system is very positive for us. There are more games and as players, you want to be playing more games. You want to be tested against the best opposition possible.”

Fundraiser for Cork All-Ireland winner who had leg amputated due to rare cancer reaches €275,000

The Cork team bus is for sale on Done Deal