LANCASHIRE manager Liam Coyne took inspiration from Sir Alex Ferguson to motivate his side towards a second-half comeback in the All-Britain Championship final.

The Manchester-born 29-year-old guided his side to a one-point win over London in Pairc na hEireann on Sunday, despite being five points down at half-time.

Although he only took up the role of county manager at the beginning of the year, the Manchester United fan knew exactly what to say when the odds were stacked against his side on the biggest occasions.

“I took inspiration from what Ferguson said at half-time to Manchester United during the 1999 Champions League final,” he told The Irish Post.

“I just said to the players, ‘look, we’ve got 30 minutes and they’ll bypass you as though they were five minutes if we don’t turn this game around, and at the end of it you’ll see the other team lifting the trophy and you won’t get your hands near it for at least another 12 months’."

Lancashire stalwart Coyne won four All-Britain Championships in a row as a player for his county, but after being forced to retire early through knee injuries, he achieved his objective at the first time of asking in the hot seat.

“Doing it as a player and a manager is special to me. I live in Manchester and I’m second generation Irish, so the biggest thing for me is to win the All-Britain, and then going on to represent Britain in the All-Ireland series is a bonus.

“Having my dad as an assistant manager as well as Tommy Harkin was a bit special too. I take a lot of inspiration from him because he played for Galway years ago, my uncle too.

“I felt different going into the game because you can only influence things by tactical decisions instead of making a tackle, blocking a ball or scoring a point. It’s a strange feeling being on the sideline, but one I enjoy.”

Not only is their manager English-born, but several of their players are too, most notably corner-back Michael Collins, while Thomas Grady and Colin Conway missed the final through injury having been influential in getting Lancashire there. 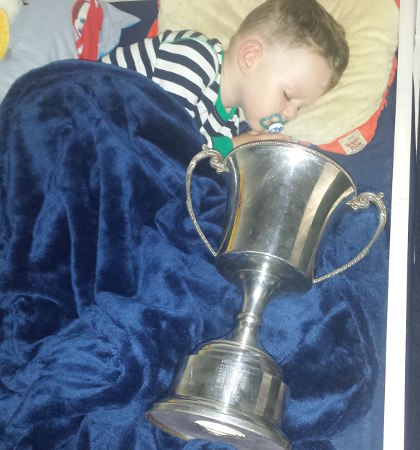 Ronnie Coyne, Liam's son, asleep with the All-Britain Sam Maguire Cup [Picture: Liam Coyne]
It could have been a very different story, as Lancashire found themselves five points down at the break, before emerging like a wounded animal.

“It was a massive game of two halves,” said Coyne. “I’ve played against London from underage all the way through to the senior team and I have massive respect for them, and you usually find it’s us and them battling it out in the latter stages.

“We just seemed to click in the second-half. Me and my assistant Tommy went through a few changes and tactics and as soon as the ball was thrown in after half-time, we won possession and I just knew the lads were in the right mind-set for the second-half.

“From there, we just kept putting over the points. It was touch and go in the end, my heart-rate didn’t come back down for about four hours after!

“If we can bring that momentum into the All-Ireland series, then we’ll take some beating.”

They will face Kerry in the All-Ireland Junior Football Championship semi-final on Saturday, July 23, at Old Bedians in Manchester.

Momentum building ahead of 2016 All-Britain Competition in Greenford