THE youngest member of the London Republic of Ireland Supporters’ club has received a UEFA award for contributing to the success of Euro 2016.

UEFA, European football's governing body, awarded several Ireland fans for an ‘outstanding contribution’ to the event, one of which was London-born four-year-old Cian Prendergast, who also had the pleasure of meeting goal-hero Seamus Coleman following the 1-0 win over Georgia.

The match took place last night at the Aviva Stadium in Dublin and, remarkably, it was the youngster’s 34th Ireland game.

Although the match itself was largely underwhelming, both father and son had an evening to remember.

“Cian had a great time, we really enjoyed it,” said his father Martin, who is secretary of the London Republic of Ireland Supporters’ club.

“The players were really warm and great with Cian. He was delighted to meet Coleman, the goalscorer.

“He got a lovely medal; it’s quite solid with a little inscription on the back of it, it’s a really lovely keepsake.

“In fact, I’ve had to take it off him to stop him running about with it everywhere!” 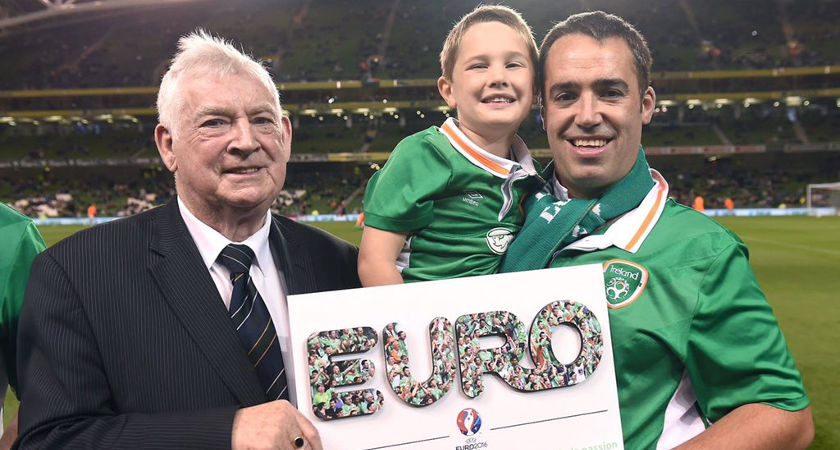 Cian and his father Martin accepting the award from a UEFA representative (Picture: Martin Prendergast)
The Football Association of Ireland (FAI) covered the cost of their flights to Dublin and the trip was a doddle for Cian, who became an internet hit in the summer for his rendition of Amhrán na bhFiann at the Sweden game in Euro 2016.

“He’s quite used to the travelling now after going to all four games at the Euros, and all the other members know him now so they look after him too,” said Martin, who is keen to recruit more young members to the club.

“We’ve got a great mix of ages in the club,” he added, “but we’re trying to get a few younger people involved.

“I’m hoping, with the Euros still fresh in peoples’ minds, some younger lads who have just come over for work or university or whatever will want to join.

“A lot of young lads do go to the games but aren’t members of the club, but it would be nice to get them signed up and we can help with their transport costs through our commercial deal with CityJet, who give us 10 per cent off flight costs for games.”