SECOND half goals from Phillip Butler, Liam Gavaghan and Dermot McWilliams helped Tir Chonaill Gaels romp to a 3-14 to 0-07 victory in their opening London SFC fixture against North London Shamrocks in Ruislip.

The North London side showed plenty of promise in the opening period of the contest, with Dultah Molloy and James Hynes putting TCG to the sword with some precision kicking.

They actually led 0-06 to 0-05 at the interval and the lead was merited, with plenty of defensive resolve and plenty of bright enterprising football when they had possession.

But a tactical switch at half time with Phllip Butler pushing up and a black card for NLS’s Cormac Coyne paved the way for TCG’s fightback and ensured they start the defence of their crown with a resounding victory. 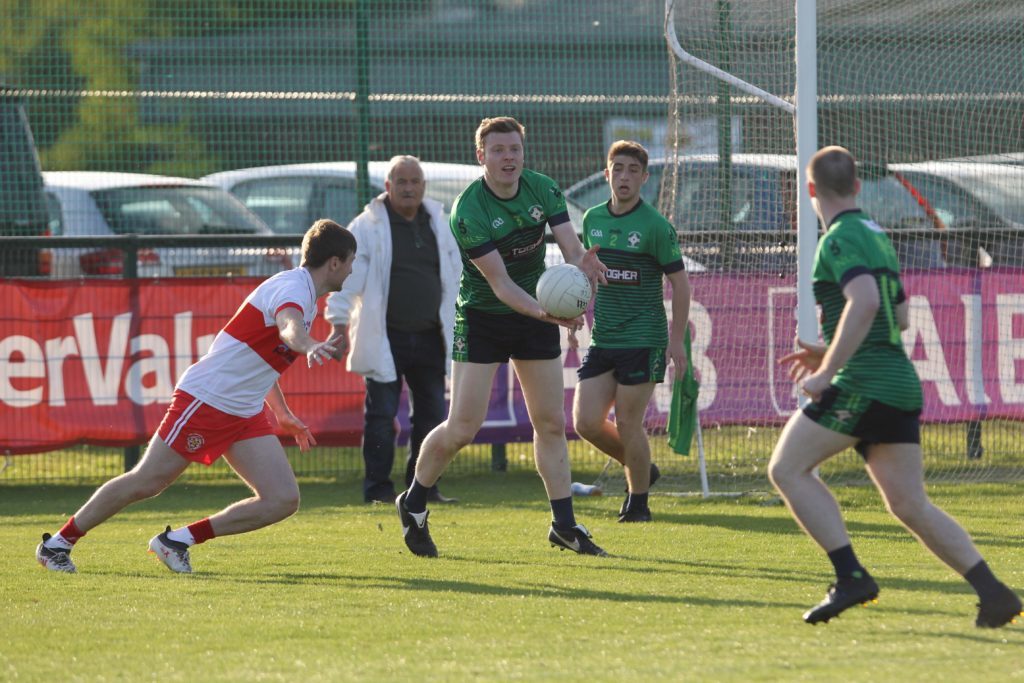 North London Shamrocks lead 0-06 to 0-05 at half time on Saturday. Photo: Brendan Vaughan

Both sides swapped early scores with Gavaghan and Mageean finding the range for TCG and Ger Minihine and Molloy doing the damage for NLS.

Hynes was coming more and more into proceedings and TCG were finding it hard to nullify him.

Coggins read the riot act to his charges at the interval and it was TCG who got the first two scores of the second period thanks to Benny McGarvey and Mageean.   Hynes responded for NLS, but that would be their only score of a one sided second half.

Killian Butler’s exploits for club and county have made headlines recently, but the older Butler showed plenty of dash to net when his side most needed it.

That gave TCG breathing space for the first time on the contest and as NLS tried to clear their heads, Mageean and Gavaghan tacked on two more quickfire scores.

The game was effectively out of reach when Gavaghan cashed in on good work from Kevin Rafferty to see the green flag raised again moments later and Dermot McWilliam’s third goal delivered a winning margin that few would have predicted at half time.

“Philly Butler moved up a little bit further because he is such a good tackler to put a bit of pressure on them. But it was same 15 on the pitch for the start of the second half and asked them to put in a better effort.

"The attitude changed, maybe North London tired a little bit and I suppose our fitness levels kicked in.

“That was fantastic for us and we’re now just looking forward to Sunday’s game against Neasden Gaels.”