It was by no means a classic final – a repeat of the 2015 decider – but Chris Byrne’s charges were in control from start to finish and were well worth their win.

Having reached the final of all four senior competitions they’ve entered in 2016, Kiernan’s carried momentum into the final and they soon stamped their authority on the match by racking up the first three scores through Michael Callery (two) and captain Adrian Moyles.

Referee Conor Conneely was consistent throughout the match, warning both sets of players that he would turn a blind eye to nothing with a series of frees awarded for over-carrying early on. 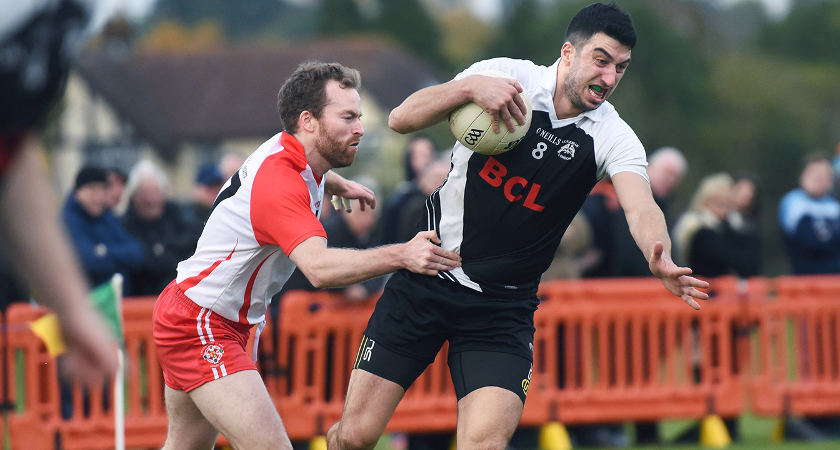 James Moran of St Kiernans escapes Brian Collins of TCG [Picture: Mal McNally]
The Gaels needed a free to finally get off the mark on 18 minutes, John McGrath striking over what would prove to be the only converted free of the game after Liam Gavaghan was hauled down.

Michael O’Donogue and TCG’s Stuart Johnston then traded scores, but Kiernan’s would hit two more scores without reply – courtesy of James Moran and Liam O’Donoghue – to send them in 0-06 to 0-02 up at the break.

Facing a light breeze in the second-half, Tir Chonaill Gaels – looking for their third Championship title in a row in their fifth consecutive final – looked as though only a goal would bring them back into proceedings, but they rarely troubled Brendan Mulrooney in the Kiernan’s goal.

In truth, TCG looked short of ideas, and they struggled to cope with the pressure Kiernan's put them under when on the ball, though bouts of possession were few and far between for the holders, as eight minutes of second-half football passed without a score.

The introduction of Mark Gottsche and Brian Collins gave St Kiernan's boss Chris Byrne something to think about, but his players seemed unconcerned and carried on about their business.

Indeed, Kiernan’s preserved their energy well throughout the second-half with plenty of possession play, but with an end result to go with it as by 20 minutes into the restart their lead had been extended to seven points, with Michael O’Donoghue (two), Moyles and Mark Mullholland strengthening their position.

Adrian Hanlon had pulled one back for the flailing holders, but by now it was clear TCG’s grip on the trophy was loosening by the minute as they struggled to disrupt the flow of their opponents.

Thomas Waters and Moyles’ third point made it 0-12 to 0-03 in stoppage time, while substitute Dillon Ward and Hanlon spared Tir Chonaill’s blushes somewhat with the last two scores of the game.

They will go on to face the winners of the Ulster Championship in the quarter-finals of the All-Ireland Club Championship.

Man of the match: Mark Mulholland (St Kiernan’s) – the wing-back was at the centre of everything that was positive about his side’s movement from defence into attack, setting up numerous points and grabbing one of his own.

LONDON FOOTBALL TEAM OF THE YEAR 2016 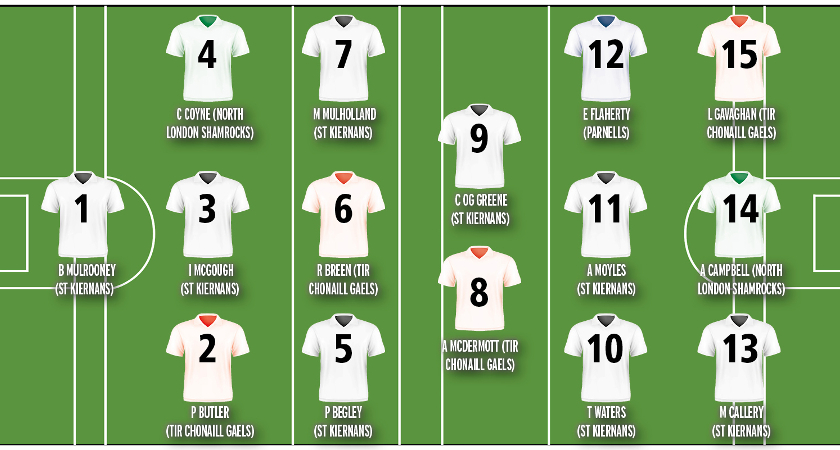