A FIRST win of the National League season still alludes London as Carlow earned a victory by a margin of two points at the Irish TV Grounds in Ruislip on Saturday.

Although the Leinster side were always in control of the game, a late fight-back from the Exiles offered encouragement for new boss Ciaran Deely, but it ultimately proved in vain.

The impressive Scott Conroy handed the hosts an early lead with the first score of the game from a free, but it was to be the only time London held the lead, and it wouldn't last long either.

With strong winds against them in the opening half, Carlow were clinical whenever they got a sight of goal, and Sean Gannon neatly side-footed in a loose ball on four minutes to claim the first of his two goals.

Amid an ill-disciplined opening eight minutes in which Colin Dunne was black carded as well as Cathal Og Greene and Conroy picking up yellow cards, London's concentration eluded them.

On 13 minutes, Carlow registered their second goal, and again it was Gannon who hit the back of the net – albeit at the second time of asking after a rebound from Gavin McEvoy's initial save fell kindly for him.

The second goal appeared to waken London up somewhat, but they were still failing to make use of the wind behind them, while Carlow picked up their first point from play courtesy of Brendan Murphy, who had a fine game in midfield.

London also scored their first point from play immediately after, with Sean Hickey shooting well on the turn after a neat lay-off from Patrick O'Hara, who then followed that up with a narrow wide as London looked to build some confidence in attack.

Adrian Moyles then added to their tally with a free, using the wind to his advantage and making the score 0-3 to 2-1 in Carlow's favour. 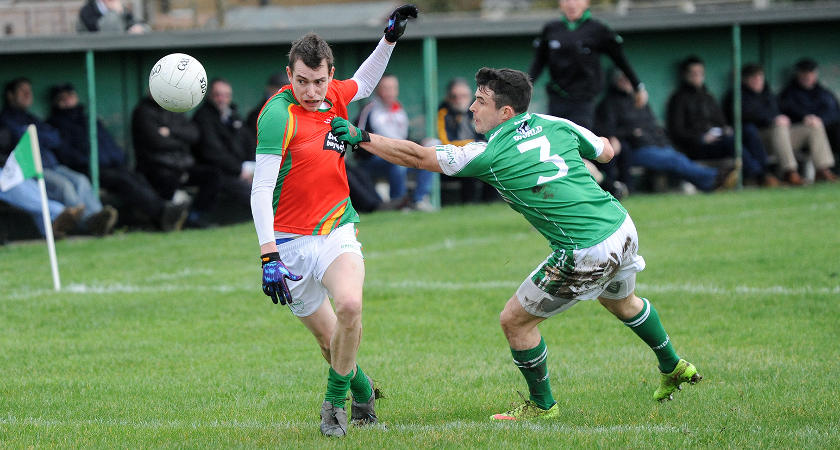 Carlow's two-goal hero Sean Gannon escapes London's captain on the day David McGreevey [Picture: Malcolm McNally]
Another neat exchange between a London pair – O'Hara and Adrian Hanlon this time – saw the latter pick up his first score of the game from close range.

However, just as London were beginning to build up some momentum having closed the gap to three points, they were dealt another hammer blow as referee Eamonn O'Grady awarded a penalty to the visitors.

Tir Chonaill Gaels corner-back Philip Butler was the man penalised after trying to mop up McEvoy's weak punch from a high ball into the box, and the London goalkeeper was given no chance as John Murphy stepped up to calmly slot the ball into the bottom corner.

Adrian Moyles then made amends for a wide by following it up with a point from play, only for JJ Smith to cancel it out with a free immediately after.

By this point, Carlow were happy to start playing a possession game, and a string of fist passes eventually opened up a chance for Brendan Murphy, who duly pointed from wide left to take the half-time score up to 0-5 to 3-3 at the end of a fine opening period for Turlough O'Brien's men.

The introduction of Mark Gottsche for the re-start would make a big difference to London's performance, but the Tir Chonaill Gaels midfielder was unable to start the match due to a niggling injury.

Moyles claimed the first score of the re-start as London looked to play catch-up, but their chances of a result were reduced dramatically when a mix-up in defence led to Rathvilly full-forward Smith palming into an open net from close range.

A point each from frees, courtesy of Moyles and Darragh Foley respectively, took the score to 0-7 to 4-4 for Carlow, who would then embark on a scoreless run for the remaining 25 minutes of the match.

North London Shamrocks forward Conroy demonstrated his power against the wind with a free off the ground before narrowly missing the target with a fierce attempt at goal moments later as London upped the tempo, although a black card for Moyles soon after sucked some life out of their half-forward line.

A handful of substitutions did little to inject belief back into Carlow, but their first-half exploits kept them with a safe lead to protect, though London were knocking at the door as O'Hara's drilled shot at goal was tipped over the bar by Palatine clubman Craig Kearney in the visitors' goal.

A goal-bound shot from London's Senan O'Grady was then blocked on the line, before Conroy took his side's tally into double figures with another pointed free.

Finally, London got the goal their play had been threatening to achieve, and it was worth the wait as Eoin Murray brilliantly caught a long ball into the box from substitute Liam Gavaghan, before beating his man and rifling a shot in off the crossbar.

With Carlow slightly on the ropes, full-back Daniel St Ledger was black carded for his part in a scrappy melee, and Conroy added another free to his personal tally once the referee had restored order.

With just two points in it and as many minutes remaining, an added-time free was played short by London, who desperately needed a goal. However, it came to little as the clock ran out on the hosts, who will be left ruing that all-important goal conceded at the beginning of the second-half.

Man of the match: Carlow and Rathvilly midfielder Brendan Murphy. The visiting No.8 was heavily involved in everything good that Carlow produced, and he chipped in with two points too.

Two arrested in connection with assault of GAA football player