CRICKETER Niall O’Brien is confident that Ireland can kick off their World Twenty20 campaign with a St Patrick’s Day victory over Zimbabwe and “cap off a fine weekend of Irish sport”.

Ireland begin their opening qualification stage fixture in Bangladesh knowing that securing a win against their biggest threat in Group B is crucial if they are to proceed to the Super 10 stage of the tournament.

“We’re probably favourites just about for this fixture. We’re in a good place, we’ve had a lot of practice so we’re just looking forward to getting going now and show them what we can do,” said the Ireland wicketkeeper.

“We hope we can cap off a fine weekend of Irish sport, there’s no reason why we can’t go out there and get the victory."

Ireland will still need to take on  United Arab Emirates and the Netherlands later in the week, but O'Brien believes that victory over Zimbabwe will place the team in a great position to progress to the next round.

“I think ourselves and Zimbabwe are two evenly matched sides. The one big advantage we do have over them, especially in the T20 format we’ve played over the last number of months, is that we’ve been playing a lot of cricket.

“We’re used to playing together, we know what we’re about, we know what we need to do. Zimbabwe have had lots of ups and downs recently with the problems within their board and striking, so from that regard we have one over the opposition.

“But once you get on the field of play anything can happen.”

Dublin-native O’Brien is also keen for Ireland to put their “demoralising” warm-up defeat to Bangladesh on Friday behind them, and instead to follow a repeat performance of their famous St Patrick’s Day victory over Pakistan in 2007 in Jamaica.

Ireland may be in a strong position to proceed to the second stage of the competition but there are still areas of their game that need to be improved, according to the former Northamptonshire cricketer. 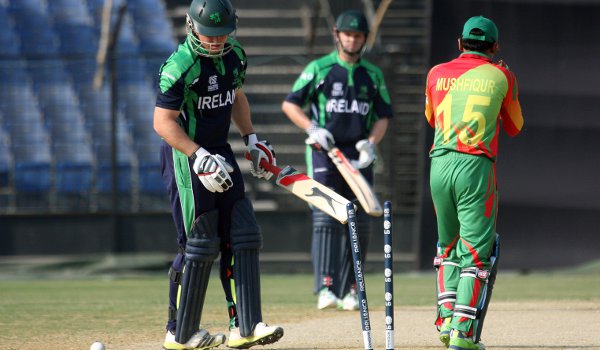 “From a batting point of view we haven’t been batting very well, so hopefully some of the batters can step up,” he added.

O’Brien believes, however, that the team’s young talent, including 21-year-old spinner George Dockerall and 22-year-old all-rounder Stuart Thompson, will be key to Ireland’s journey to the Super 10 stage.

“It’s a different looking squad, a real touch of youth, that’s what Twenty20 is all about if they can go out and express themselves and keep putting up the good work,” he said.

Ireland may have plenty of upcoming talent in the squad but they remain one of the Associate nations who are yet to receive Test status.

O’Brien believes that the dream of playing Test cricket is still alive and achieving Test status would elevate the popularity of cricket in Ireland and Irish sport worldwide.

“As a youngster growing up in Ireland, even though cricket was pretty much a non-Irish sport, all of us dreamed of playing Test cricket, and now that dream can become a reality in the not too distant future if we play well enough," O'Brien added.

“I think it would be huge for the sport; it would put us on the map even more so than now.

“At the moment everyone knows we play cricket, the other sides respect us and have a little bit of fear because they don’t want to lose to an Associate side, but if we were playing Test cricket we would be in the public domain on a daily basis all around the world.

"That’ll give the sport a major boost and give the board plenty of access to some more finances to spread the game.”

Ireland's cricketers will be hoping that they can continue the country’s recent sporting success as they begin their World Twenty20 campaign in Bangladesh, and will take inspiration from none other than Irish rugby legend Brian O’Driscoll.

The former Ireland captain ended his international career on a high on Saturday, with a long-awaited victory over France and the Six Nations title.

“A fantastic result. Such a fitting way to send Brian off in style, everyone here is chuffed to bits. Brian is an inspiration to us all," said O'Brien.

“We’re absolutely delighted for him and the team, so hopefully we can continue the fine weekend with Davy Russell’s win at Cheltenham and the rugby Six Nations, and hopefully we can get a win on St Patrick’s Day.”

Ireland’s cricket side set for a competitive 2023