MELBOURNE, AUSTRALIA - JANUARY 14: Novak Djokovic of Serbia plays a forehand during a practice session ahead of the 2022 Australian Open at Melbourne Park on January 14, 2022 in Melbourne, Australia. (Photo by Daniel Pockett/Getty Images)

NOVAK DJOKOVIC has had his visa canceled again and this means he won't be playing at the Australian Open. Immigration minister Alex Hawke stated he "carefully considered" all information before deporting the Serbian.

Djokovic won his appeal over the first ban of his visa on Monday and was granted permission to stay by a judge. Hawke has been deliberating whether to use his powers since his legal win.

If #Djokovic lawyers don’t challenge Minister Hawke’s decision in the court or are unsuccessful doing that, he will be deported from Australia immediately.

At 6pm (7am Irish time) on Friday, Hawke issued a statement saying that the world no one would be sent home "on health and good order grounds' '.

"Today I exercised my power under section 133C(3) of the Migration Act to cancel the visa held by Mr Novak Djokovic on health and good order grounds, on the basis that it was in the public interest to do so.

"This decision followed orders by the Federal Circuit and Family Court on 10 January 2022, quashing a prior cancellation decision on procedural fairness grounds.

"In making this decision, I carefully considered information provided to me by the Department of Home Affairs, the Australian Border Force and Mr Djokovic.

"The Morrison Government is firmly committed to protecting Australia's borders, particularly in relation to the Covid-19 pandemic." 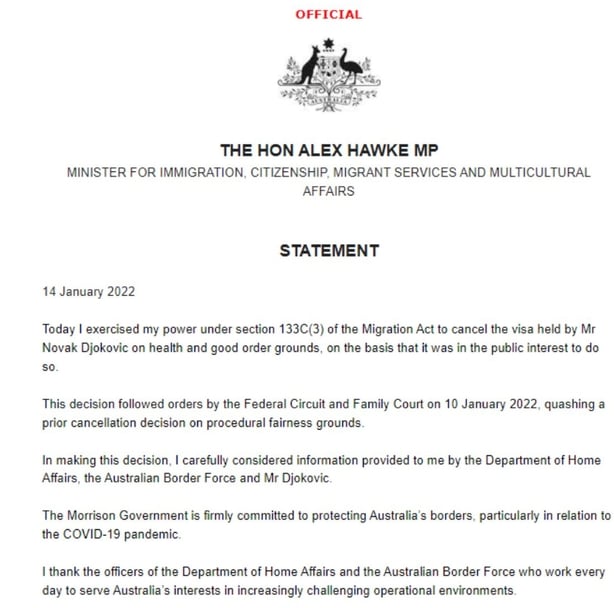 The 34-year-old landed in Melbourne on the 5th of January and was given medical exemption through Tennis Australia to play at the tournament despite all players needing a double vaccination to enter the country.  The Serbian had the virus previously and this is why he was granted the pass to enter.

However the tennis star was stopped by Australian Border Force through the night and was later told his Visa had been revoked. He was then placed in a detention hotel in Melbourne.

He won his legal case to stay in the country five days later and was granted permission to play in the tournament which starts on Monday.

Djokovic could mount a second legal challenge to the second cancellation of his visa, but it seems very unlikely that he will win any appeal or a record 21st grand slam at Melbourne Park.

It's reported that the Serbian has been practicing ever since his legal win on Monday and had hoped to play, but now that seems to be at an end.

It's also said documents indicate Djokovic tested positive in Serbia on 16 December but he was photographed at events on the following two days and issued a statement earlier this week admitting he took part in an interview with French newspaper L’Equipe at his tennis center in Belgrade despite believing he had the virus.

The tennis star also admitted he had falsified his declaration form by stating he had not traveled in the 14 days prior to his trip to Australia, he blamed the agent.

Czech player Renata Voracova and an official who also had exemptions have also left Australia without mounting a legal challenge.

It remains to be seen if the decision will be contested. Djokovic could also face the prospect of being banned for three years from the country.

The 34-year-old has avoided a return to his detention hotel and is set to be interviewed by immigration officials on Saturday.

Ryan Tubridy: Novak Djokovic attending the Australian Open could have been a covid super spreader event