OLE GUNNAR SOLSKJAER has been sacked as manager of Manchester United, the club has confirmed.

The Norwegian's last game in charge was Saturday's 4-1 defeat at Watford, in which captain Harry Maguire was sent off.

Former United midfielder Michael Carrick, who was part of Solskjaer's coaching team, has been placed in temporary charge.

A Manchester United statement said it was a "difficult decision" to part company with Solskjaer, who won six league titles as a player at United and scored the winner as they defeated Bayern Munich in the 1999 Champions League final.

"Manchester United announces that Ole Gunnar Solskjaer has left his role as manager," read the statement.

"Ole will always be a legend at Manchester United and it is with regret that we have reached this difficult decision.

"While the past few weeks have been disappointing, they should not obscure all the work he has done over the past three years to rebuild the foundations for long-term success.

"Ole leaves with our sincerest thanks for his tireless efforts as Manager and our very best wishes for the future. 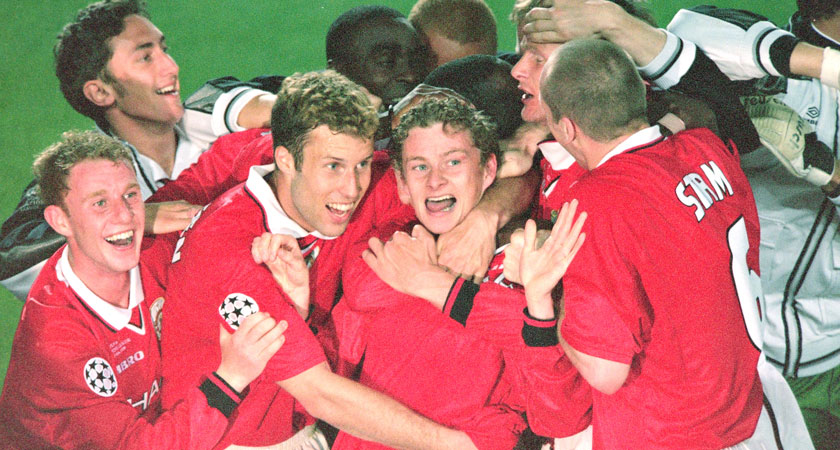 Solskjaer is mobbed by teammates after scoring an injury-time winner against Bayern Munich in the 1999 Champions League final (Image: Etsuo Hara/Getty Images)

"His place in the club's history will always be secure, not just for his story as a player, but as a great man and a Manager who gave us many great moments.

"He will forever be welcome back at Old Trafford as part of the Manchester United family.

"Michael Carrick will now take charge of the team for forthcoming games, while the club looks to appoint an interim manager to the end of the season."

Solskjaer took over on an interim basis following the sacking of Jose Mourinho in December 2018, with the club sixth in the table and 11 points off the top four.

After a run of 10 wins and one defeat in 13 league games and the club just two points off the Champions League places, the role was made permanent in March 2019.

The club fared much better the following campaign, finishing third after a shaky start and reaching the semi-finals of the FA Cup, League Cup and Europa League.

They went one better in the Premier League in 20/21 and despite a group stage exit from the Champions League, reached the Europa League final, losing to Villarreal on penalties.

However the lack of a trophy after spending a reported £441m since his arrival meant the pressure was on to deliver this season.

After an unbeaten start in the league, United moved joint top on September 19 after beating West Ham.

But defeat to the same opposition in the League Cup in their next game, coupled with a shock loss at Young Boys in their Champions League opener, hinted that all was not well.

They won only one of their next seven league games, losing to lowly Aston Villa and Watford in that time, as well as suffering home defeats to fierce rivals Liverpool (5-0) and Manchester City (2-0).

Northern Irishman Brendan Rodgers, whose Leicester side also defeated United during that recent dismal run, is among the favourites to replace Solskjaer.

Rodgers is the third favourite at 6/1 with Sky Bet, behind former Real Madrid boss Zinedine Zidane (9/4) and interim manager Carrick (5/2).