THE DAUGHTER OF legendary Brazilian footballer Pele has given an update on her fathers health and thanked fans of the superstar for their support.

Yesterday reports emerged that the 82-year-old was rushed to hospital with swelling all over his body and heart failure issues.

According to ESPN Brasil, Pele is undergoing treatment for metastatic cancer, and went into the Albert Einstein hospital in Sao Paulo on Tuesday for an unscheduled visit. The outlet described Pele's condition as 'debilitated'.

His daughter Kely Nascimento posting on Instagram and said "Hi my friends. Lots of alarm in the media today concerning my dad's health.

"He is in the hospital regulating medication. Some of my siblings are visiting Brazil. There is no emergency or new dire prediction.

"I will be there for New Year's and promise to post some pictures. Really and truly, we appreciate the concern and love!!" 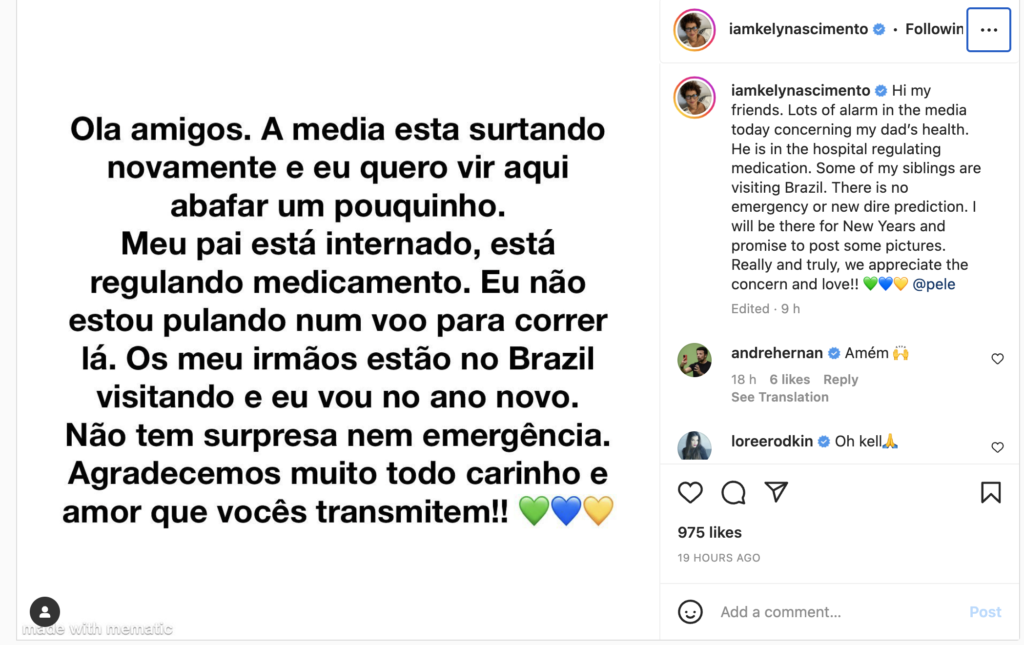 Pele is widely regarded as one of the greatest footballers to ever have played the game.

Born in October 23, 1940 in Três Corações, Pele excelled in football signing for Santos at age 15.

The Brazilian won nine São Paulo league championships and, in 1962 and 1963, both the Libertadores Cup and the Intercontinental Club Cup

Soon after he would receive a call up to Brazil national team at 16.

Pelé's first international match was a 2–1 defeat against Argentina on 7 July 1957 at the Maracanã. In that match, he scored his first goal for Brazil aged 16 years and nine months, and he remains the youngest goalscorer for his country

He is best remembered on these shores for his efforts in helping Brazil win their first World Cup in 1958 as a 17-year-old. He would go onto win two more in 1962, and 1970

Pele also played in the MLS for the New York Cosmos in 1974 alongside the likes of Johan Cruyff, Eusebio, Bobby Moore, George Best and Gordon Banks.

Pele would eventually hang up his boots on 1 October 1977 after a glittering career in football.