THE PRESIDENT of Ireland has paid tribute to Munster head coach Anthony Foley, who passed away suddenly in Paris.

Michael D Higgins described Foley as "one of the great figures of Irish sport in the modern era" and "a great leader both on and off the pitch".

Foley, 42, passed away in the Munster team hotel while in Paris for his side's European Champions Cup game with Racing 92. 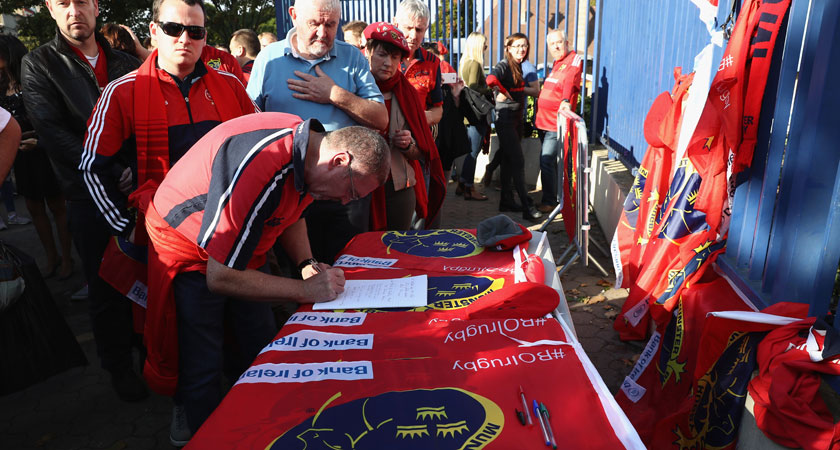 Munster fans in Paris sign a book of condolence for Anthony Foley [Image: Getty]
The President's statement added: "He was regarded with great respect and deep affection not just among the Munster rugby fans but by all those interested in Irish sports and those with whom they interacted abroad.

"While news of his death will be received with shock by all those in the rugby and sports world, it is of course first and foremost a great tragedy for his family and close friends.

"As President of Ireland, and as Patron of the IRFU, I offer them and Munster rugby my deepest sympathies."

London Irish CEO Bob Casey echoed those sentiments in a statement released by the club.

"Our sincere thoughts and prayers are with his family, friends and everyone connected with Munster Rugby at this incredibly sad time for the world of rugby," it read. "May he rest in peace."

Terrible news about Anthony Foley. A giant of a man, a true legend from Clare & Munster. What a loss. Deepest sympathies to his family. RIP

RIP to a giant of a man @Munsterrugby legend Anthony Foley ? A fantastic rugby man both on & off the field. Heartfelt condolences.

Rip Anthony Foley.. thoughts are with his Family and friends at this sad time. @Munsterrugby ??

Can't quite believe it. So incredibly sad. My thoughts are with Olive, his boys & and his extended family. https://t.co/rslxzyC85T

So sad to learn of death of Munster & Ireland rugby hero Anthony Foley. Will be remembered for his dedication & indomitable Munster spirit.

So shocked to hear the tragic news of Antony. A pleasure to have played with and been coached by him. Thoughts are with Olive & his family