Preview: French revolution still in doubt ahead of Ireland's visit to Paris

ALMOST comically stone-faced as he slumped in his chair, Guy Noves looked his inquisitor in the eye and kept his commentary on the renaissance of French rugby as brief as possible. “Can you work your magic here?” he was asked. “I don’t have a wand,” he replied. “I am not Zorro.”

In Toulouse, he’s regarded as much more than that. Twenty-two years in charge of the club brought 10 French titles and four European Cups, earning him a reputation as one of the most successful coaches in the game, but not, paradoxically, one of the best.

Described at different times as ‘dictatorial, combative and arrogant’, Noves is partially a victim of ageism – last Saturday marked his 62nd birthday – and partially a victim of his own reluctance to move with the times. “From what I hear he wasn’t a great strategist,” said Bernard Jackman, the former Irish hooker, who now coaches in the Top 14 with Grenoble. “Toulouse had that period of success because they had the best players. That changed when other clubs began to bring in players from overseas and Toulouse no longer had the coaching tools to beat them.”

So to some, he is yesterday’s man, just as France are yesterday’s team. No longer the side who dominated Europe and scared the All-Blacks, now they don’t even scare Ireland, who haven’t lost against them in five games dating back to 2011. In the context of this rivalry, it’s worth pointing out how France went from 1975 to 2000 losing just once to Ireland. 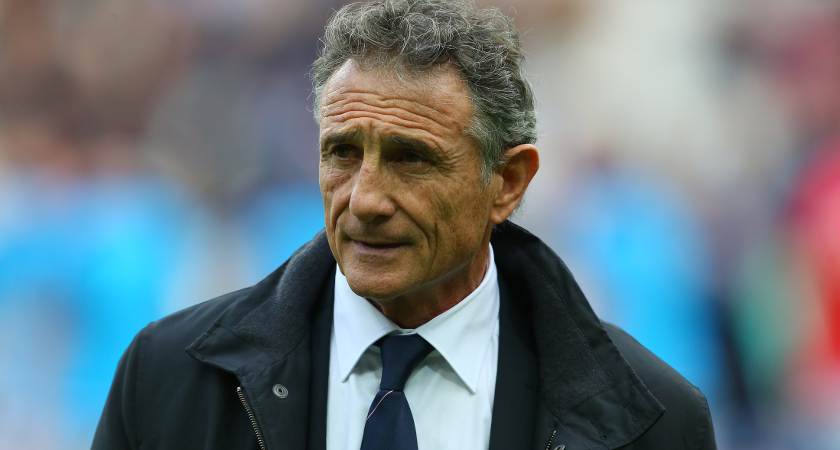 New France coach Guy Noves [Picture: Inpho]
Yet times have changed. Of the starting XV who lined out for Ireland against Wales on Sunday, only five have ever lost to the French. And they aren’t on their own. Only nine of France’s last 21 Six Nations matches have ended in victory. Clearly they are in need of a new system rather than just a new coach.

“I would sincerely like that he succeeds where I failed,” his predecessor Philippe Saint-Andre said. “But unfortunately I fear the worst for him. What good will it do, if we just keep in place the same cracked foundations?”

The foundations he referred to is built upon a structure where France’s clubs put self-interest above the national good. Accordingly, the national side has suffered.

They may still have the greatest resources of all the European rugby playing countries – but not up front or at half back – where they need it most. Under Saint-Andre, graft was preferred to craft. “The French game was built around flair in the backs and real physicality up front,” noted Steve Hansen, the All Blacks coach in advance of their quarter-final tie at last year’s World Cup.

“I’m not sure it’s the same flair they have now. The Top 14 has become quite a dour competition with a lot of physicality and I know they are trying to recapture the flair which is within them.”
“Capped seven times by France, Noves retired early from international rugby in 1979”

Against New Zealand in the World Cup, they tried too hard. And the end result – a 62-13 defeat – spelled the end not just of Saint-Andre’s reign, but also, it was felt, France’s status as a global superpower. “The game has passed them by,” said a former international coach. “You can’t get by any more with va-va-voom, lovely, open rugby, played off the cuff. You need a plan.”

Which was why they chose Noves to implement it. In one way, it’s a surprise, not just because he is 62, but also because he was a rebel. Capped seven times by France, he retired from international rugby in 1979 after the selectors favoured Frederic Costes. “No one contacted me. No one said why. I was just dismissed,” he said at the time. “I’ll just play club rugby from here on in, an ambience that suits me.”

So he did – seeing out his playing career at Toulouse, who he later came back to coach. With 35 of his 62 years spent with the same club, it’s quite a jump for him to go from a place where he had absolute authority to a situation where he has responsibility but not control. “Guy will find it’s different asking clubs for favours,” said Bernard LaPorte, the former France national coach, who has had his share of run-ins with Noves. “It’s worth remembering he wasn’t that helpful when I was in charge.”

Now he needs all the help he can get. Having watched France fall apart at the World Cup – four years after the players rebelled against Marc Lievremont in New Zealand – he knows the one thing the squad needs is continuity. “Too many changes occurred under Lievremont and Saint-Andre,” said Jackman. “You need consistency in selection to get consistency in performance.”

With this in mind, Noves wiped the slate clean. Ten debutants joined his first squad for the Six Nations. Jonathan Danty, Virimi Vakatawa, Sébastien Bézy and Paul Jedrasiak all got the nod to play in the narrow win over Italy. “Noves will play the best players, will pick the best team,” our source, the ex-international coach said. “That didn’t always happen under Saint-Andre.”

So why the doubts? Part of it is because he is not a technical coach. “Well, I don’t agree with the view that Novès is past his sell-by date,” Marc Duzan, who is part of his backroom staff, told The Guardian. “He’s a manager, a director of rugby, and his job is to stand up to the clubs and to deal with administration and the media. It won’t be him on the training park all the time.”

So what can we expect – a France that is building towards the 2019 World Cup? “No, I may not be the coach in four years’ time,” Noves said. “We must look after today.” And not just today but tomorrow. “I want to give the kids the desire to pick up a ball and play rugby after watching a France game. I want them to feel inspired.”

Maybe they can be. But a lot of people have their doubts.