Rio 2016: Light at the end of the tunnel as dust begins to settle on Michael Conlan episode

FEW things are more permanent than body ink, but for Michael Conlan it’s a good thing the tattoo industry is thriving with talent in this day and age.

Etched on the Belfast boxer’s abdomen is the five coloured rings universally recognised as the logo of the Olympic Games, at which he won bronze as a 20-year-old in London 2012.

Coming into Rio 2016 as the favourite for gold being the reigning world champion and number one seed in his division, only rotten luck could deny him.

And deny him luck did. Or, in his view, corruption denied him, leaving a bitter taste that will surely see him seek out Belfast’s best tattoo artist to cover up those rings he once deemed of perpetual worth.

“I’ll never box in this competition again,” said Conlan, in one of many anger-fuelled, post-fight interviews since suffering a controversial loss to Russian Vladimir Nikitin in the quarter-finals of the men’s bantamweight competition in Rio.

“I was here for Olympic gold. My dream’s been shattered now. These ones are known for being cheats and they’ll always be cheats.

“Amateur boxing stinks from the core right to the top.”

Strong words from Conlan, which the International Boxing Association (AIBA) have refuted having been the target of his verbal venom.

AIBA have been under intense scrutiny following the extraordinarily dubious decision against Conlan, which followed equally questionable scoring by judges who favoured Russian Evgeny Tishchenko, who was awarded victory over Kazakhstan’s Vassiliy Levit to claim heavyweight gold.

In response to pressure from journalists out in Rio, AIBA have stated that “less than a handful of decisions were not at the level expected” and that judges involved in such outcomes will take no further part in these Olympics.

AIBA just sent out a statement on rumors of corruption etc. @AIBA_Boxing pic.twitter.com/hMuEuuJ3ke

They made no reference to which fights were judged below the “level expected” so the lack of clarity will do little to comfort anyone who feels for Conlan, let alone the boxer himself.

There’s a whole host of avenues to explore when analysing the mess the International Olympics Committee (IOC) and AIBA have made of boxing at these Games.

There’s the opportunity afforded to professionals to compete and the change to the ‘10-points-must’ scoring system used in the pro ranks, which has undoubtedly left some fighters confused as to how to go about actually winning a fight having been so accustomed to the old computerised system.

However, what’s more frustrating, is that a boxer’s right to appeal a result was abolished before Rio.

It means Conlan never had a chance of salvaging his situation once his opponent’s hand was raised, and he knew that right away if his post-fight interviews are anything to go by. 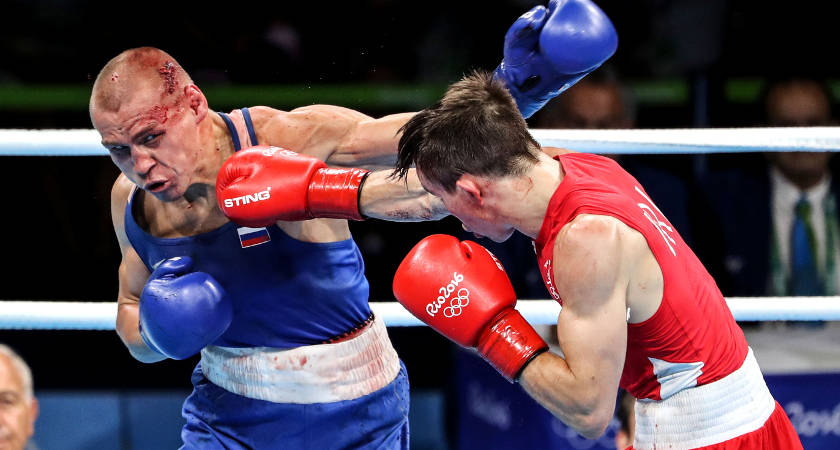 Conlan appeared to beat his bloodied opponent over three rounds [©INPHO/Dan Sheridan]
The IOC should order an independent investigation in order to determine whether or not there’s any truth in the widespread corruption allegations, but that will never turn Conlan’s Olympic nightmare back into a dream (and it would probably take years to complete).

But both he nor Irish sports fans should dwell on the matter too long. Conlan will move on to bigger and better things in the professional game now.

Look at Roy Jones Jr – he was named ‘Fighter of the Decade’ by The Boxing Writers Association of America in the pro ranks in the 1990s after being denied a gold medal through horrendous judging at the 1988 Olympics in Seoul.

Likewise, Floyd Mayweather (who was watching Conlan's fight from the stands) was denied a clear win at the 1996 Games in Atlanta. In his last year before retiring in 2015, Mayweather was the richest sportsman on the planet, according to Forbes Magazine.

Indeed, had Conlan put the same time, effort and emotion into a pro career as he has done over the last four years in preparation for the Olympics, he’d already be a millionaire.

But that’s where he’s heading now. And if there’s one thing Irish sports fans are renowned for, it’s getting behind their stars when there’s a source of injustice.

Obviously, professional boxing is not immune to bad scoring, but Conlan will enter the paid ranks with an army of fans and a fleet of sympathisers, a key attraction to the biggest promoters who have one thing in mind – ticket sales.

The Belfast brawler will have plenty of options on the table in the coming months, that’s for sure. All he needs to do now is choose wisely and, in the meantime, get that tattoo covered up.

Michael Conlan is world number one in new AIBA rankings