Rory McIlroy yet to master Augusta: 'Majors are hard to win, irrespective of your talent. Sunday proved as much'

IT SEEMED like the changing of the old order, the week the Tiger era ended and the McIlroy one began, as the golfing Gods declared the old golf King dead. A new one had arrived.

“He is the best player I have ever seen,” said Graeme McDowell of the 2011 US Open winner, the youngest to lift the trophy since Bobby Jones in 1923, the first to finish the competition 16 shots under par.

“Can he be the next Tiger? Those are the big shoes to fill but Rory has the talent,” McDowell said. “But will he have the focus, the single-mindedness of purpose? Ultimately it will come down to how badly he wants it?”

On a warm Wednesday afternoon in 2011, McIlroy appeared to “want” it real bad and as he nursed the US Open trophy in the clubhouse bar where he once passed the time by hitting plastic balls into the pint glasses of amused members. That afternoon, the talk wasn’t of the week just gone but the years ahead.

McIlroy said: “I hope this isn’t the last Major I win. I hope one isn’t the end but the start. I want to win a second and when I win a second, I want a third. But I won’t put a number on how many I aim to finish up on. The only person who did that was Tiger, who targeted 19. But that’s Tiger.”

“What is he, 22?” Harrington asked. “That’s more than enough time to break Jack Nicklaus’s record (of 18 major title wins).”

Yet that record of Nicklaus only happens to be the most protected one in sport – never mind, golf – an accumulation of 18 majors in a career which spanned from his first major in 1962 to his last in 1986.

Putting McIlroy in company as exalted as Nicklaus and Woods was a favour he didn’t need. On Sunday, nearly seven years on since those innocent days of prediction, he blew his latest chance to win a career grand slam.

Augusta National has become an obsession for McIlroy. And it worsens by the year. His day began on Sunday with references to Nicklaus, Woods, Ben Hpgan, Gene Sarazen and Gary Player. It ended with his name lumped in beside Cameron Smith’s, the joint fifth best player in the 2018 Masters. 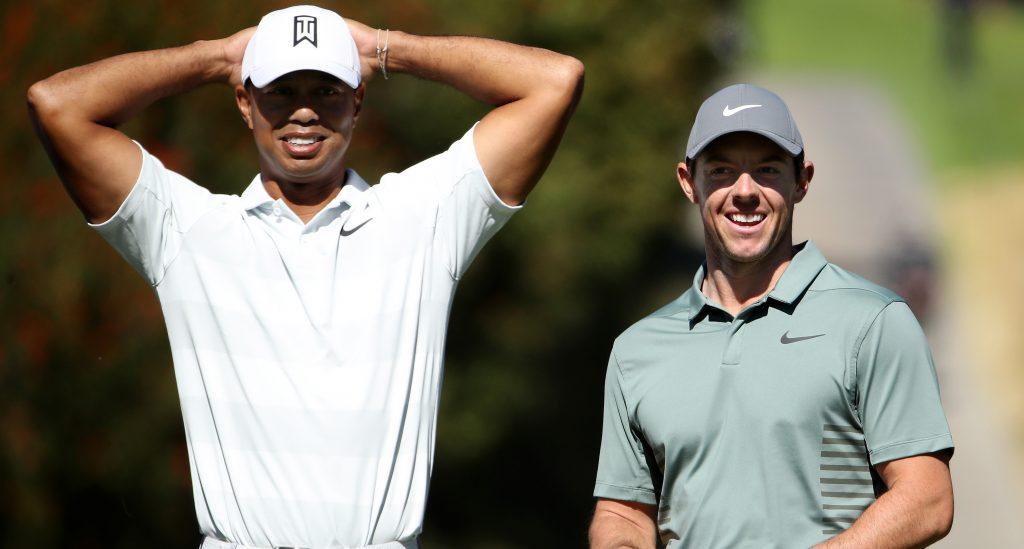 Back in 2011, when McIlroy blew a four shot lead going into the final round at Augusta, he underwent a rigorous self-analysis, forcing himself to watch that horror show final round (when he posted 80) and unearth what went wrong.

“I observed my body language,” he said. “I was panicky, taking shots too quickly, not taking control of the situation. I could see I needed to get my swagger back, my cockiness and some real self-belief.

“So I went into the US Open with a mindset that I am better than everyone else and that I was going to go and show people that.”

Similar rhetoric was issued on Saturday night after he closed to within three shots of Patrick Reed, the eventual winner. “There’s pressure leading,” McIlroy said. “Until you experience that, you don’t know what it is like.”

By the second green on Sunday, it appeared as if McIlroy’s mind games were having an effect. He had a putt for eagle which would have tied him with Reed for the lead.

He choked on it, as he would on the third, the fifth, the ninth, the 11th, the 13th before a three-putt on 14 ended his dream for another year.

“The thing about Rory is that he is not that great a putter,” said Eduardo Molinari, back in 2011, “and to win majors, you have to putt real well at the weekend.”

Last weekend, he didn’t. Far too often in his career, he hasn’t.

Way back in 2010, he openly stated that “winning the career slam is not beyond the realm of possibility,” yet now that he is one tournament away from doing so, it actually seems increasingly unlikely.

"What drives me on is to be better than everyone,” McIlroy said eight years ago. “When I was little, my parents gave me this self-belief. I believed I could do anything. Now, I want to become the best player in the world.

“I'll know it when I walk to the range and look at all the other players, and I say, 'No one can beat me.' That must be what it's like for Tiger."

There is a noticeable difference. Woods had a short game as well as every other tool in his locker. In terms of tee-to-green, McIlroy may be golf’s equivalent of Lionel Messi, but once he has a putter in his hand, he’s the sport’s version of Phil Neville.

That he has generated so much hype and publicity stems from the fact he achieved so much, so young and in such style to draw comparison with another 22-year-old who scorched the field in Lytham and St Annes to win his first Major in 1979.

The year European golf bid farewell to that genius, Seve Ballesteros, was the year a new hero came along to keep the flame alight, collecting that first Major at Congressional.

Seven years on, McIlroy has four majors to his name. Ballesteros retired with five on his CV. They are hard to win, irrespective of your talent.

Sunday at Augusta proved as much.

The Masters: Which Rory McIlroy will show up for the missing Major in his set?

McIlroy-'No reason why I shouldn't have a good chance'