Rugby World Cup: The rise and ruin of Romania

IT remains one of sport’s terrible ironies, how the arrival of a political revolution ruined the prospects of a rugby one. Twenty-six years ago, Romania – as a rugby nation – was thriving.

A year previously, they had travelled to the Arms Park and returned home with Wales’ scalp. A year later, they beat France in Auch, their eighth victory over the country who had taught them the game, but significantly, their first on French soil.

And it wasn’t a fluke. Romania, in the 1980s, and early years of the nineties, was the closest thing rugby has ever had to a rebellion, coming seemingly from nowhere to the stage where, in a four-year spell between 1980 and 1984, they were drawing in Dublin with Ireland, beating Wales, Scotland and, on two occasions, France, while, in 1981, New Zealand escaped with an eight-point win in a game where Romania had two tries disallowed.

“They were an unbelievably good side,” said Jonathan Davies, the former Welsh captain. “When we lost to them in 1983, I remember looking at their pack and thinking, 'O God, we're in trouble'."

He was right. The Romanians won 24-6 that day – a year before they defeated the Grand Slam winning Scots in Bucharest, fuelling speculation they’d be invited to join the Five Nations. Some chance. In the political climate of the day, neither their location behind the Iron Curtain nor their ‘shamateur’ status sat well with the snobbish conservatives running the world game.

"When the rest of the rugby world was amateur, we were professional, now rugby is professional we are completely amateur,” the former Romanian captain, Alin Petreache, said back in 2003.

At that stage, everything had fallen apart. Nicole Ceausescu – the country’s hated former dictator – was dead but so were six of Romania’s starting XV, killed in combat during the 1989 revolution. With that, the dream of becoming a global superpower was also buried, the finance supplied by the Ceausescu regime drying up in the aftermath of the revolution.

Although they kept plodding along, and are one of just 12 countries to play in all eight World Cups, the days when they could legitimately dream of beating absolutely any team in the world, are long since gone, their nadir arriving in 2001 when they lost 134-0 to England, the same nation they came within eight points of beating at Twickenham just 16 years previously.

"Romanian rugby is close to disappearing altogether, we are in complete crisis, who knows if we can survive and come through. The next two or three years will tell,” Dumitru Mihalache, the then president of the Romanian Federation told the Daily Telegraph shortly after that defeat.

"Perhaps in five years' time there will be no such thing as Romanian rugby, it will just be something you read about in books, a curiosity in our history. We need every bit of help that is available. Now is the time for rugby to show solidarity.”

It did. Buoyed by a victory over Italy in 2004, their best result in 13 years, Romania slowly began to find their feet again. The stark decline, which saw playing numbers drop from 12,000 at its peak in the 1980s to just over 4,000 in 2003, has been halted. Now, there are 62 registered clubs – roughly half of what once was there when Ceausescu was sponsoring the sport, but an improvement on 2003, nonetheless. Annual funding from the IRB has breathed life into what appeared to be a terminally ill patient.

“I can say without a shadow of doubt that this is the best prepared team for a RWC tournament, since I have been working with the Romanian Federation," the World Rugby High Performance consultant Richie Dixon said earlier this year. 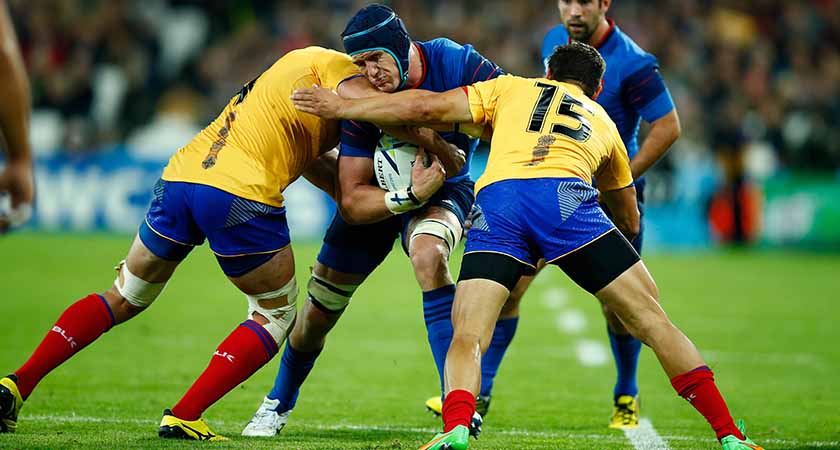 Romania caused France problems but eventually lost their opener 38-11 [Picture: Getty]
“The standard of the players in contention for selection has gone up. There is a strong team ethic and the group is tighter and more compact as a result.”

Results back up Dixon’s boast. While the days of beating France, Wales and Scotland appear to belong to history, there have been signs in the last four years that they are becoming competitive again. The thirteen months separating February 2013 and March 2014 saw Romania play 13 internationals and win 12.

This year, they collected the IRB Nations Cup for the third time in four seasons, following victories over Spain, Namibia and the Argentinean Jaguars. “It is always the same with Romania”, said Lynn Howells, their Welsh coach in the aftermath of that tournament win.

“The first game after the squad reconvene is always pretty disjointed, peppered with unforced errors and the players are hopelessly out of sync. They come from their clubs where the standards are pretty low and everything needs to be revised and reassembled, from skill sets to match fitness, intensity, not to mention game plans. They always made a big improvement in the second match, having spent nearly 10 days together - they are better focused, and structured and start to manufacture opportunities, but still, seem unable to finish them off.

“Their performance against the Jaguars vindicated my confidence that time is of the essence in making progress with this team. The players have absorbed the criticism and produced a much better performance, mainly in the set-piece and defence. However, there is a lot left to be perfected in all areas."

He’s getting there, though. With 11 of his squad based in France, and a 12th, Cătălin Fercu, on Saracens’ books, Howells has both quality and experience available to him. What has also helped is the addition of three naturalised players, the Georgian born, Otar Turashvili, who has strengthened Romania’s front row, South African Randall Morrison and New Zealander Michael Wiringi. Johannes van Herden and Paula Kinikinilau are also likely to make the cut for the World Cup.

“Things are moving forward nicely,” said Howells. “What is pleasing is that the players are aware of the huge amount of work in front of us and are prepared to put the work in. After the Namibia match we had a long meeting, when we discussed the plans for the RWC build-up and analysed the shortcomings revealed by the game: the contact area, the lineout, game awareness and attention to detail. You name it! It was a long meeting and some hard truths have been spelled out. We are making progress.”

Sunday's game against Ireland will reveal if he’s right.