FORMER England player Stuart Pearce believes that West ham's Declan Rice should not have been allowed to change his international country after starting with Ireland's underage squads.

Rice played for Ireland's U21 sides alongside Jack Grealish, who also switched to England.

👕 “As soon as you wear a national shirt for a country, you cannot change allegiance!”

❌ “It’s wrong! You should not be able to chop, change and play for another nation.”

Rice had a breakout campaign for West Ham in the 2017/2018 season, which alerted England manager Gareth Southgate.

Rice never made a competitve senior appearance for then Ireland manager Martin O' Neill and shortly after switched nations due a fifa rule in 2019 despite playing in three friendlies for the senior side.

Rice has now become one of the main cogs in Southgate's team and got to a European final in 2020, so his decision was somewhat vindicated.

“One thing I disagree with and I think a ruling should be made, as soon as you wear a national shirt for a country, you cannot change allegiances and go and play for someone else', he said.

“That turns into club football for me.”

Pearce also told TalkSport used an example during his time as the England U21 boss : “

“If you play youth football up to Under-21… when we played a tournament against Germany in a major final, their left back turned up playing for the Canadians a month later or however long, from being a German Under-21 international, which you can do.

“For me, I just think it’s wrong. If you decide to put a national shirt on at any age group - this is my personal opinion - you should not be allowed to chop and change and go and play for another nation.” 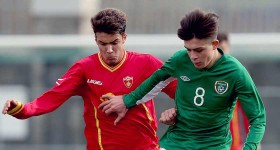 Grealish in action for Ireland's Under 21s [Picture: Inpho]