Dublin , Ireland - 26 June 2022; Players and officials from both sides become embroiled as they make their way to the dressing rooms after full time ended in a draw at the GAA Football All-Ireland Senior Championship Quarter-Final match between Armagh and Galway at Croke Park, Dublin. (Photo By Daire Brennan/Sportsfile via Getty Images)

THE GAA are set to launch an investigation into the ugly scenes that marred the enthralling contest between Galway and Armagh on Sunday.

The sides couldn't be separated in normal time in their All-Ireland Senior Football quarter final, and both headed towards the dressing room before a mass brawl broke out between the two football teams.

The fight lasted about a minute and involved everyone from the subs, backroom staff, to the members of extended panels.

The most shocking incident of the melee was Armagh's Tiernan Kelly gouging Galway's Damien Comer, which was caught on camera.

Tiernan wasn't punished for his crimes, but Galway captain Sean Kelly and Armagh’s Aidan Nugent saw red. Kelly will miss the semi-final against Derry on the July 9

The #SundayGame panel discuss the brawl at the end of normal time during Galway’s All-Ireland quarter-final against Armagh. #RTEGAA pic.twitter.com/WtUCM3UbLA

High profile figures, past and present have given their take on the situation

“I think it was shocking scenes, said," Taoiseach Micheál Martin.

“It was a great game of football...awful that it was marred by what happened at the end of the game.

“But there is no room for that in any sport and particularly when young people are watching their heroes on the football, hurling or soccer fields, they don't need to see this type of behaviour.

“And it's quiet, quite disturbing to see and quite concerning.”

In my time as president, I made a huge effort to clear the side-lines down to one manager and one runner, he added

"That’s more than enough. We really have to get to grips with this situation."

"We had a situation in Croke Park on Sunday where we had excellent dressing rooms on both sides of the field. We could have used one for either team or avoided this. 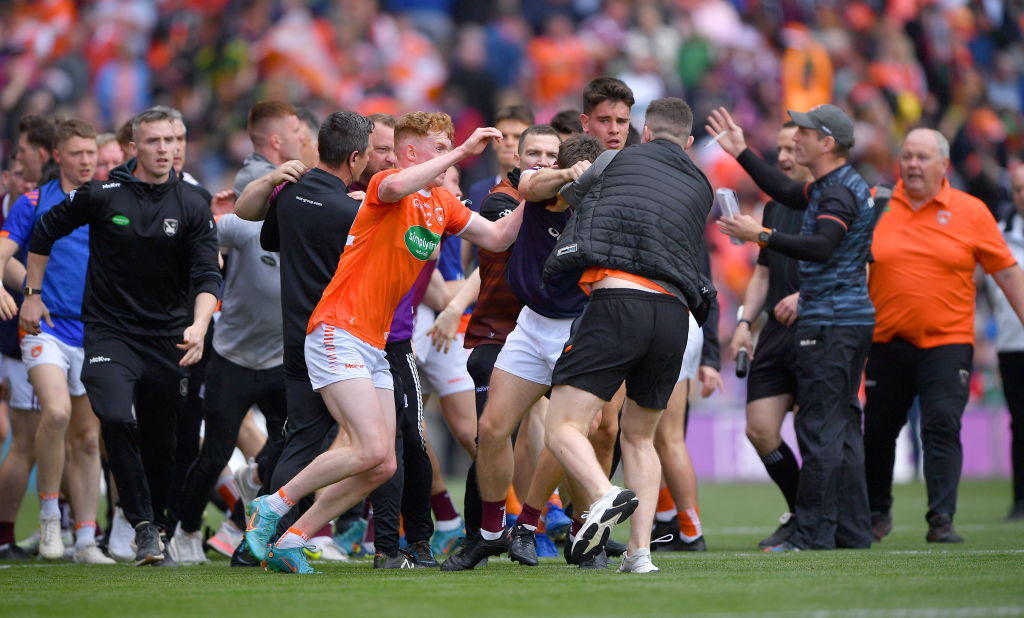 O' Neill also believes that harsher penalties need to come in, and that the return of the black card's full use might be an option.

Nowadays a black card results in a 10-minute sinbin, while before that it lasted a whole game

A second black card, or a black following a yellow, will result in a red card

"We should move to a situation where penalties are imposed on the day. We had that at one stage where the black card lasted for an entire game, that meant people weren’t doing the sort of things they’re doing now. We have to get back to that.

"We can’t legislate for everything that happens but the responsibility for sports administrators is how we handle those situations when they develop.

"It’s up to us to address what happened on Sunday and make sure it simply doesn’t happen again."