YOU could learn a lot about modern football from what we might call the parable of Jamie Clarke and Conor McManus, played out in the latest round of the league when Armagh hosted Monaghan.

McManus is perhaps the game’s most in-form forward this side of James O’Donoghue. He is less gifted than Clarke, which is hardly an insult, because with Colm Cooper out, who isn’t?

And yet their contrasting fortunes, even allowing for the fact that Monaghan were superior by 10 points, tell a tale that sums up the difference between the best, most ruthless sides, and those that aspire to join them.

McManus ended with seven points, two from play, while Clarke scored three, one from play. Clarke did not play badly.

His point from play was a screamer, one of his frees was of similar calibre, and he drew two fine saves from Rory Beggan, the most under-rated keeper in the country, from a penalty and an audacious free.

Yet he had nothing like the effect on the game his Clontibret counterpart did. It could be argued that McManus was the conduit through which the game was won within 10 minutes of it throwing in.

Yes, he had a pinpoint supply from the likes of Kieran Hughes and Padraig Donaghy, but the manner in which he took apart Andy Mallon — one of the best players in Armagh’s win over Laois in the previous round — was ruthless and rapid.

The first four balls contested between the two resulted in three scoreable frees, a wide and a yellow card for Mallon. The battle was so one-sided that it was surprising it took 12 minutes for Paul Grimley to switch markers.

Then again, who’d be a manager? First ball in — another pinpoint Donaghy delivery — between the Clontibret man and his new bodyguard, Mark Shields, and McManus burst out in front to collect, turn and kick his best point of the night.

If that wasn’t enough to turn Paul Grimley a deeper shade of purple, one minute and two botched kick-outs in a row later and the gap was seven.

So McManus’ dominance was one of the factors that helped Monaghan streak 0-9 to 0-0 ahead. He ensured that the visitors got full value for their utter dominance in the first 25 minutes.

And his clever destruction of two markers had far-reaching consequences, for after Armagh had hauled themselves back into the game, Mallon received a second yellow that was always likely, and the contest ended there.

Why, when Armagh were on top either side of half-time, was Clarke unable to have as profound an effect on the scoreboard or Monaghan’s morale? True, Malachy O’Rourke’s side are stronger and more disciplined in defence, but the answer goes deeper: Conor McManus gets frees, and Jamie Clarke doesn’t.

It would be an unfair stretch to accuse McManus of diving, because he doesn’t. He does, however, have no hesitation in making a well-timed gesture or stumble to demonstrate to the referee that he is being fouled. 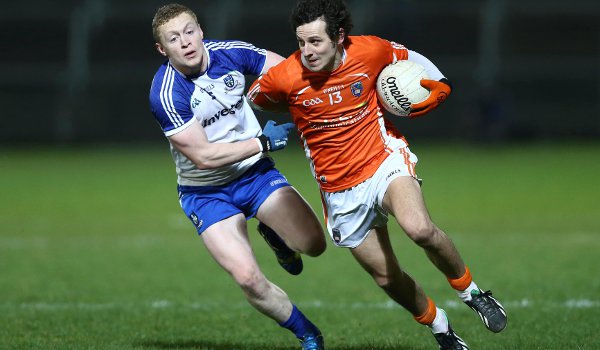 He did it for the very first ball in between him and Mallon. A half-yard behind, Mallon made contact with McManus’ arm. It was unquestionably illegal, but the sort of thing Mallon might have got away with when he won his All-Star in 2005.

Definitely the sort of thing he would be more likely to get away with marking Clarke, who probably would have shrugged off the challenge, collected the ball and tried something special to beat his marker and the other arriving backs.

McManus makes life easier for himself. He might have got a free anyway, but he made a gesture that highlighted the offence, making sure the free was awarded.

Aside from earning a handy point, that foul set the tone for a battle McManus won hands down, for a similar incident moments later drew the yellow. Two pieces of cuteness, and McManus had all the freedom he needed to showcase his talent.

For Clarke, the night never got any easier, as he thrashed about in the Monaghan blanket, like an outnumbered action hero.

On a couple of occasions, he pulled off the improbable and scored, but real life is not like the flicks; the hero can’t hope to overcome improbable odds time and again.

Many people claimed that this showed that referee David Gough had a bad game. Utter nonsense; we re-watched the game and counted only two or three bad decisions, with the benefit of a perfect view and replays. What’s more, he got the big calls, the penalty and Mallon’s two yellows spot on. Not good enough for fired-up fans at the time, but surely a good show for a flawed human covering a whole football pitch for 70 minutes.

No, brilliant as Clarke is, his difficulties were symptomatic of his team’s. Like it or not, the best teams are thoroughly prepared, immaculately organised, have a posse of players with rugby league physiques, are focused and motivated, and above all, are willing to use their heads to manipulate an edge any way they can.

You will find plenty of people arguing — sometimes this column included — that playing for frees should not have to be part of a player’s repertoire. And maybe Clarke will decide that being crowded out of games is better than playing in a way contrary to his brilliant nature.

Armagh have the genesis of a decent side. They turned 9-0 into 11-10 with half a team missing, with 19-year-old Ethan Rafferty battling well at midfield, with Caolan Rafferty underlining his potential to become one of the best half-forwards in the country.

That should not obscure the most relevant lessons from this game, which came in the first 20 minutes, when Armagh were obliterated.

Teams in the shake-up for trophies, such as Monaghan, are clever and merciless. Teams such as Armagh, for all their promise, are often left to look amateurish in comparison.

Clarke and Armagh will be waiting a long time for protection, particularly when they face Cavan this summer. They could be forgiven for concluding that the moral from this parable is that the football gods protect those who protect themselves.