UEFA HAVE FINED THE Football Association of Ireland €20,000 for the Republic of Ireland Women’s team for their chants after the win against Scotland on the 11th of October.

Ireland reached their first ever major tournament by beating Scotland 1-0 thanks to Amber Barrett's strike in the second-half.

The win meant that Ireland are now heading to the World Cup in 2023, when it takes place in Australia and New Zealand next year.

After the game a video surfaced online where players were seen chanting the popular Wolfe Tones ballad 'Celtic Symphony' with the words 'Ou Ah Up The RA 'being sung among the jubilant players.

The players received huge backlash for the chants and issued an apology shortly after.

UEFA confirmed on October 13 it was investigating the incident for potential inappropriate behaviour. 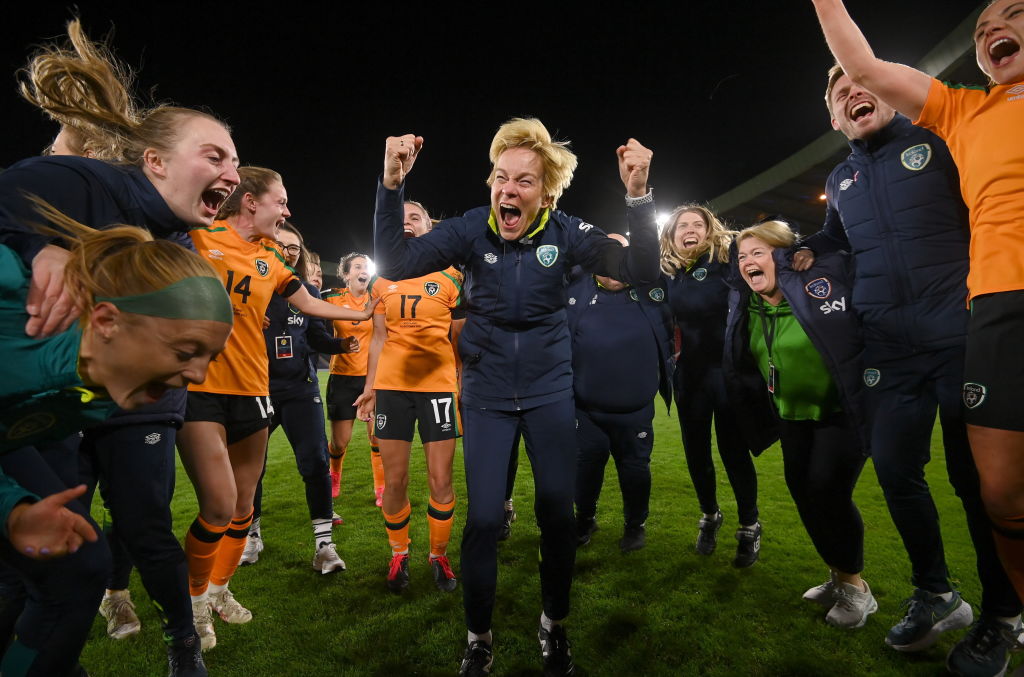 They now have concluded that investigation by fining the FAI today.

The football governing body said 'it was a violation of the basic rules of decent conduct'.

The statement from UEFA read: "The UEFA Control, Ethics and Disciplinary Body has announced the following decision:

"Following an investigation conducted by a UEFA Ethics and Disciplinary Inspector regarding the potential inappropriate behaviour by players of the Republic of Ireland Women’s team in the aftermath of the 2023 FIFA Women's World Cup qualifiers play-off second leg match played against Scotland on 11 October 2022, and the subsequent disciplinary proceedings opened against the Football Association of Ireland, the UEFA Control, Ethics and Disciplinary Body has taken the following decision:

- To fine the Football Association of Ireland €20,000 for the violation of the basic rules of decent conduct.'

The FAI responded by stating that they would accept the findings and fine from UEFA.

"The Football Association of Ireland notes and accepts the sanction by the Control, Ethics and Disciplinary Body of UEFA following UEFA’s independent investigation into a potential breach of UEFA’s Disciplinary Regulations.

"The FAI and the Republic of Ireland Women’s National Team has apologised to all affected by events after the 2023 FIFA Women’s World Cup Qualifying Play-Off against Scotland in Hampden Park in October.

"The FAI has assured UEFA that all players and staff across all of our international teams have been, and will continue to be, reminded of their responsibilities every time they represent their country.

The FAI will be making no further comment on this matter."

Vera Pauw's side begin their campaign against hosts Australia on the 20th of July in Sydney. They will then face Canada in Perth six days later. The Girls in Green will then finish their group stage games with a game against Nigeria in Brisbane on the 31st of that month.

UEFA has fined the FAI after its senior women's team sang a pro-IRA song at Hampden Park after their World Cup play-off win over Scotland.https://t.co/d41y7XbcuV