War of minds and bodies: We preview the Ulster final between Tyrone and Donegal

A COUPLE of weeks ago, Peter Donnelly, Tyrone’s strength and conditioning coach, showed some GPS data from the last three years to the senior squad.

Most of their numbers had increased but one stat was jumping off the page. Tyrone’s average top running speed had risen dramatically. Some of the individual times were off the charts.

A lot of Tyrone’s training sessions are focused on that intense speed. Different players in different parts of the field do set sprints more suited to their position but most of the players are speed machines, built for lethal counter-attacking football.

In the Ulster semi-final replay against Cavan, Tyrone just dropped the pedal and left their opponents in their vapour trail. Peter Harte scored two goals and blazed another chance over the bar.

For all three chances, Harte began his support run from beyond midfield. Conor McAliskey nailed Tyrone’s third goal on a three-on-one break. Rory Brennan walked the fourth into the net. If Tyrone needed more goals, they could have scored eight or nine.

Tyrone’s running game now is broadly similar, possibly even more advanced, to the slick hard-running and counter-attacking game which carried Donegal to the 2012 All-Ireland title. Donegal may not play with that same pace and verve anymore, but they are still powering forward.

Sunday is their sixth successive Ulster final appearance, the first team since the great Down side of the 1960s to achieve that feat. And standing in their way are a Tyrone team hell-bent on atonement after four years of intense suffering at the hands of Donegal.

In so many ways, overcoming Tyrone defined this generation of Donegal footballers. Now the roles have been reversed. Tyrone are good enough to rattle an All-Ireland but their failure to beat Donegal over the last six years has been one of the defining realities of the modern Mickey Harte era.

“He (Jim McGuinness) had told all of us how we would beat Tyrone,” wrote Rory Kavanagh in his book ‘Winning’, about facing Tyrone for the first time in 2011. “He had been telling us since the start of the year. It was all Tyrone, Tyrone, Tyrone. McGuinness never stopped talking about Tyrone. At times it seemed as if they were the only team he was interested in talking about. Beating Tyrone will define us, he told us.” 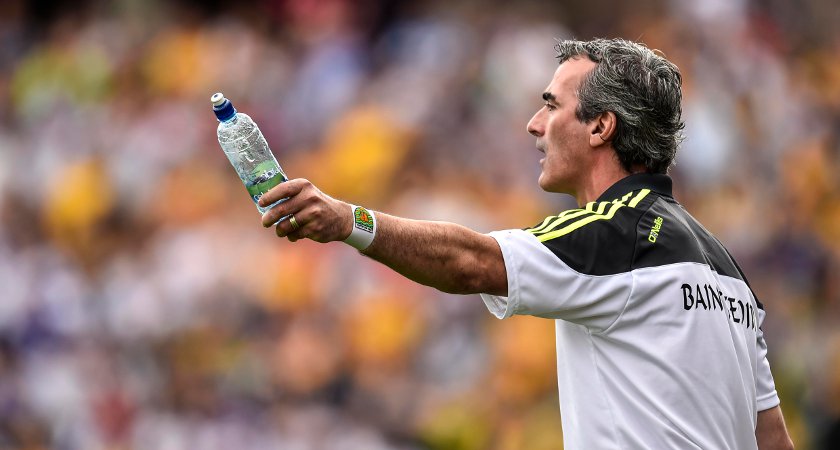 Jim McGuinness kick-started Donegal's dominance over Tyrone [Picture: Inpho]
Tyrone were reigning Ulster champions. They still had their sights set on another All-Ireland until the McGuinness machine rolled into town and changed everything. The Armagh-Tyrone domination of Ulster football which had stretched over 13 years was over.

A new team was about to bring another fierce and distinct aura to the soul of Ulster football. The game was incredibly tense and hard-hitting. It was total trench warfare. Tyrone were held to 0-9.

Donegal only managed eight scores but it was enough to officially launch the McGuinness crusade.
Tyrone had patented much of the template of modern football but Donegal represented a new game. A new way. “We were coming off the field that day thinking ‘What the hell happened there?” said Tyrone’s Philip Jordan a few years later. “You were kinda saying to yourself, ‘This is a different way of defensive football’.”

Tyrone couldn’t say they hadn’t seen it coming. When the sides met in the league earlier in that 2011 season in Omagh, Donegal restricted Tyrone to just 0-6. Tyrone only managed a solitary point in the second-half.

When Donegal turned them over again in Clones five months later, it established a trend that still holds; Donegal have beaten Tyrone in every league and championship meeting since that cold spring day in 2011.

That breakthrough championship win was followed by two more huge summer victories against Tyrone in 2012 and 2013. When the sides met in their next big game – a key league game in 2015 – Donegal swatted Tyrone aside with the back of their hand, limiting them to just 0-6 again, and winning by ten points.

That defeat really stung Tyrone because it also effectively relegated them. Harte had expressed huge disappointment in his players afterwards but Tyrone couldn’t summon that hurt to inspire them to victory when the teams met again six weeks later. That match in Ballybofey 14 months ago encapsulated everything about this rivalry, and what they both think of each other.

Played in an atmosphere of naked hostility and hatred, 14 assorted cards, including two reds, were dished out while a brawl erupted at half-time before Donegal narrowly shaded a match that was compelling and competitive until the dying minutes.

There were times during that game when it seemed possible that Harte was about to concoct another of those brilliant acts of defiance but Tyrone ultimately couldn’t get the job done for the fourth time in five years.

In two of the last three seasons, Tyrone have reached All-Ireland semi-finals after losing to Donegal, when Donegal themselves could go no further than an All-Ireland quarter-final. Yet serial defeat to Donegal has been a black stain on Harte’s modern legacy and it’s one he and his players are absolutely desperate to remove.

Harte has proven himself as one of the game’s greatest managers. His legacy is assured after winning three All-Irelands but to win another one now with a new team would possibly be his greatest achievement yet. This is a team on the move, and with serious All-Ireland ambitions, but cracking Donegal in this endlessly fascinating war of minds and bodies is all that matters to Tyrone for now.

Overcoming Tyrone has defined Donegal. Arresting that trend is what may now ultimately define Tyrone.