Over €1m has been raised for Sean Cox over the past year (Image: File)

LIVERPOOL have once against shown their support for Irish fan Sean Cox, who was left fighting for his life after being assaulted ahead of a Reds game in April.

The team were in Dublin on Saturday for their penultimate preseason friendly and impressed their Irish supporters with a convincing 5-0 win over Napoli at the Aviva Stadium.

However the biggest cheer of the evening came when the players and manager Jürgen Klopp displayed a banner in support of Mr Cox, who spent five weeks in a Liverpool hospital.

The gesture is similar to that made by the squad following their 7-6 aggregate victory over Roma in May, when they also displayed the banner, which the club says has become ‘a symbol of collective support’ for Mr Cox.

Meanwhile the Premier League team's players took time out to greet fans and sign autographs after the emphatic win in Dublin, including new £67million keeper Alisson, who embraced a young fan who made his way on to the pitch. 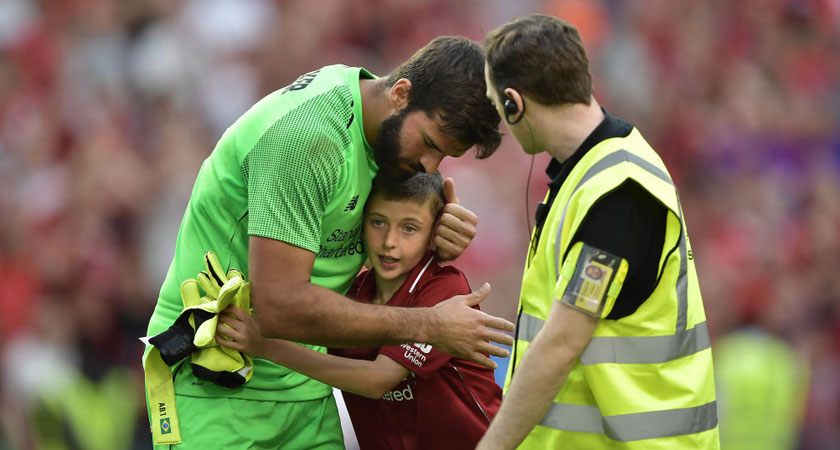 Three weeks ago it was revealed that Mr Cox had regained consciousness and was on the road to recovery, having been placed into an induced coma after the attack.

The Meath native was in Liverpool for his side’s Champions League semi-final first leg tie against Roma on April 24 when he was attacked shortly before kick-off outside a pub near the stadium.

In May, Roma fan Daniele Sciusco, 29, pleaded guilty at Liverpool Crown Court to violent disorder and was remanded in custody until sentencing.

Co-accused Filippo Lombardi, 21, pleaded not guilty to the same charge, as well as to a charge of inflicting grievous bodily harm.

He has been remanded in custody until his trial in October.