Worcester Warriors CEO on his journey to the top

From working for the Premier League and London Irish, to running both a world power boat and a professional sailing series, for which he travelled from as far as Korea to Bermuda, his accomplished and well-travelled journey began in his native Belfast.

Schooled alongside broadcaster Eamonn Holmes at the city’s St Malachy’s College, Mr O’Toole went on to study languages at Queen’s University, before heading to the University of Surrey in Guildford to do Tourism Marketing.

Following this he gained 25 years of experience in the sports marketing industry, but he concedes it’s not a path he initially considered.

“I wanted to be a teacher originally, and then I had a year in Italy as part of my degree in Rome, teaching English in a school near the Vatican,” he says. “And that taught me I was not going to be a teacher, I didn’t have the patience for it.”

Having worked for various sports marketing agencies in the mid 1980s, where his loyalty as a Manchester City fan was tested when working for rivals United, it was on his wedding day of all days that he was presented with an exciting job opportunity.

“On my wedding day a friend approached me, he was married to a Northern Irish friend of mine and said that he’d started a sponsorship agency,” he explains. “He won a big piece of business from Scotland and needed a Celt of some sort to go run it. He persuaded me and off I went.”

After hitting career milestones that included setting up his own sponsorship business, his next move, a four-month opening at London Irish, led to his eventual appointment as Commercial Director. He spent two years here before heading north to join current club Worcester Warriors.

“When I joined London Irish it was clearly an exciting time for professional rugby and for the club, with Mick Crossan and Phil Cusack taking over and also the new BT Sport deal, which revolutionised the media coverage of the sport,” Mr O’Toole says.

“I loved London Irish, I had a fantastic time there. I established some really good long-term relationships but when the opportunity comes to be the boss, which came, I couldn’t say no to it. It was too good of an opportunity to turn down and I left with a heavy heart, but a man’s got to do...”

Mr O’Toole was welcomed to the Worcester set-up one month ago, during a period where the club found themselves at the top of the Championship table. Whilst there’s “a real buzz, genuine excitement building and bubbling excitement as we get towards the play-offs”, as Mr O’Toole explains, it was less than 12 months ago that Worcester were a side struggling to avoid relegation. 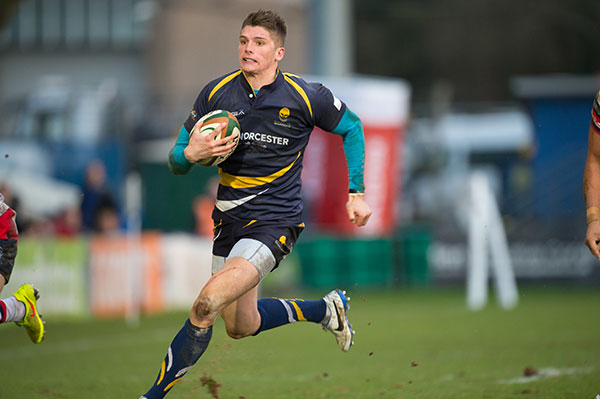 This occurred during Director of Rugby Dean Ryan’s first season in charge, in which he aimed to change the focus to bringing long-term success to the club. He began the process of targeting young players whose talent could be developed, signing Sam Smith, Ryan Mills and Nick Schonert ahead of the current season.

It’s a philosophy that Mr O’Toole has adopted, and one that separates Worcester’s current run in the Championship to that which followed the 2009/10 season, when the team were relegated under Mike Ruddock.

“Our whole recruitment strategy under Dean, for the last 18 months, is to find a mixture of quality leaders who are in their late 20s, who’ve been around the block and who will be leaders on and off the pitch.

“Then to bolster that or combine that with young players who have been held-back in their current clubs because they’re second or third behind an established international or an established top class player.

“We have two young Irish players already, Darren O’Shea, who came from Munster, and Niall Annett who came from Ulster, and Neil was exactly that. He was behind Rory Best and Rob Herring at Ulster.”

There’s a belief now and an ambition for the team to regain their status amongst the big clubs in the Premiership.

“The vision of our ownership is for us to be an established Premiership team which is challenging for qualification for the top European competitions,” he says.

“We’re not setting targets of winning specific trophies or anything like that, it’s a bit naïve to do that to be honest. We want to be established, respected and commercially viable based on good rugby, under good coaches. We want to be up with the big boys and we want to be there every year.

“We’ve been up, we’ve been down again, and now we’re aiming absolutely to get back there. In its 20 year journey the club has gone from being a small little rugby club to being in the top division of English rugby.

“It’s been a really interesting growth from a level seven club, which is a really amateur club, having 40 or 50 people sat watching us on a Saturday afternoon, to having a 12,000 capacity stadium.”

Whilst the Warriors embark on their journey to get back into the Premiership, Mr O’Toole is travelling in the literal sense, as he commutes weekly from his central Worcester residence to his home in Beaconsfield, where his Cumbrian wife Sandra lives for the time being with their three teenage children.

Less than an hour south of Birmingham, Worcester is an Irish stronghold boasting a lot of second-generation Irish residents, according to the new club boss.

“You can see a lot of Irish surnames,” he says. “Even today for example, I discovered that our Head of Operations’ mother and father are both 100 per cent Irish. We just signed a new physio, Natasha Doyle, who plays for the Irish Ladies Exiles, she’s from Liverpool and has just joined us from Bristol.

“There’s no hiding who I am or where I’m from, so the number of people who’ve come up and said ‘my dad’s from Donegal’ or ‘my mum’s from Belfast’ it’s everywhere you go. There’s a lot of proud Irish Diaspora people here.”

Mr O’Toole’s Irish roots meant that the GAA was firmly installed in him during his early years. He played Gaelic Football for Queen’s University and for the Co. Antrim U21 team; although interestingly he never played rugby due to the lack of opportunity at school.

It was his son Finn’s rugby training from the age of five, for the local team, that led him to become age group manager at Beaconsfield Rugby Club. He went on to become Junior Chairman, then Chairman of the club for three years, ensuring that he’s experienced the sport from the amateur and grass roots to the professional level.

So, has the experienced chief executive got any advice for youngsters aspiring to get into the field of sports management and marketing?

“It’s simple. You need to work hard at you and your connections to get work experience in a variety of sports organisations. It’s a sign of the times and its depressing in many ways, but my kids have been told, you need to start building your CV from the age of 14.”

Sons of Erin hold on in Holbrooks thriller