IF Kerry thought they were on cruise control en route to another All-Ireland final then they’re about to discover the road ahead isn’t just filled with potholes, but one giant canyon.

Having eased their way to semi-finals – Clare, Tipperary, Clare again – they now face Dublin, the one team who have had their number since 2009 (in Championship terms at least).

That they arrive at this stage undercooked is another problem altogether, yet for Kerry, it isn’t revenge that is driving them this weekend. It’s something deeper than that – a need to prove they aren’t a flash-in-the-pan side.

“We feel we can get there. We need to shore up where we fell short last year and we acknowledge that the Dubs are leading the way at the moment, taking up from our team of the Noughties.

“That’s something we want to address. We feel we can beat any team in the country but the reality is we have to show it. Dublin haven’t lost in the Championship since Donegal beat them in 2014, so at the moment they are kingpins.”

And don’t Kerry know it.

Having met in the last two national finals, they have been comprehensively beaten twice, although the irony remains that their performance in April’s league final was better than the end result suggested, whereas their result in last September’s All-Ireland was more impressive than the performance.

“April football and August/September football aren’t first cousins of each other,” Crowley said.

“The fact is we tried out a few things in the league final. Up to the 60th minute we were doing alright. We didn’t have enough possession, enough chances, and if you don’t have that you’re not going to win a game.”

Especially when that game is against Dublin – a team who have now won three All-Irelands this decade and who, quite possibly, could end up not just as the greatest Dublin team of all-time, but possibly the second greatest side Gaelic football has known.

Thus far, they have reversed the trend that characterised the original Dublin-Kerry rivalry. Back then, after Dublin’s triumphs in the 1976 All-Ireland final and the 1977 semi-final, the rivalry existed in name only. Dublin turned up, alright, but Kerry kept beating them (in the Championship), all the way through from 1978 until 2011. 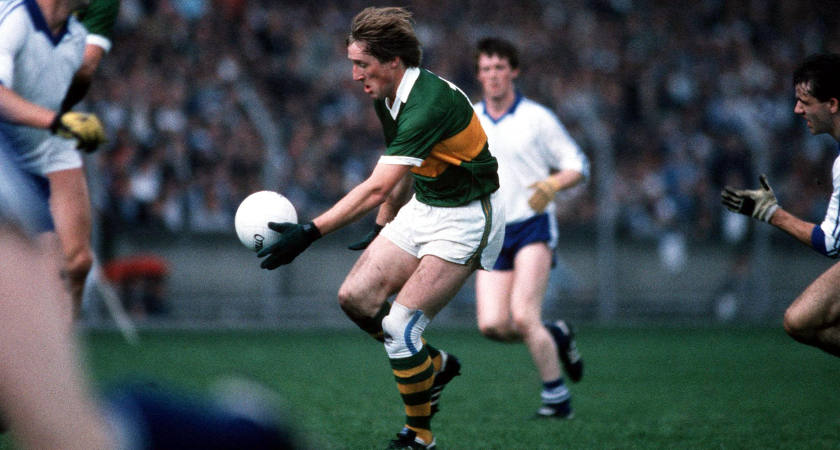 Pat Spillane inspired Kerry during their dominance over Dublin in the 80s [Picture: Inpho]
And then the pendulum shifted when Pat Gilroy’s nearly men came of age and Kerry came unstuck.

Yet even though they seem clearly superior to the Munster champions, neutrals, including the Longford manager and former Dublin forward, Jack Sheedy, feel the gap Kerry have to bridge is manageable.

“In many ways Dublin and Kerry play very similar styles,” Sheedy said. “They play with very strong and attacking half-back lines, are highly mobile and they look to squeeze things high up the pitch.

“Both have half-forwards with serious pace and a high work ethic, players like Paul Flynn and Ciarán Kilkenny in Dublin or Paul Murphy and Johnny Buckley in Kerry.

“They’ll be trying to get as much ball into their forwards as they can and they’ll be happy to take their chances from there. That’s how Kerry play and they have the quality of players in all the positions to make it work.

“The intriguing thing is that Dublin do an awful lot of the same things as Kerry. The basis of both teams is that they try to win primary possession and turn it into scores.

“Trying to plan against that for the other team is difficult because they both have so much firepower.”

While the capacity of the Kerry forwards to catch fire is definitely there – other issues remain, the main one being that last year’s All-Ireland finalists have played just three games since June 12.

“Now this is my beef,” Tomas O’Se, their former player, said. “Nearly everybody will say that Kerry will be fresh coming in, but Kerry have played roughly two games in eight weeks in the middle of the summer, and that for me is madness.

“Ideally, it would be great to have a situation where you’re playing, worst case scenario, every three weeks.

“Games are where you learn. You can do all the training you like in Killarney but you won’t learn as much as you would in a Championship match.”

Yet if Eammon Fitzmaurice learned anything from Kerry’s quarter-final win over Clare, he was able to keep it hidden. Like O’Se, his former colleague, their relative inactivity is a concern. "Four weeks between games is a long time,” the Kerry manager said. 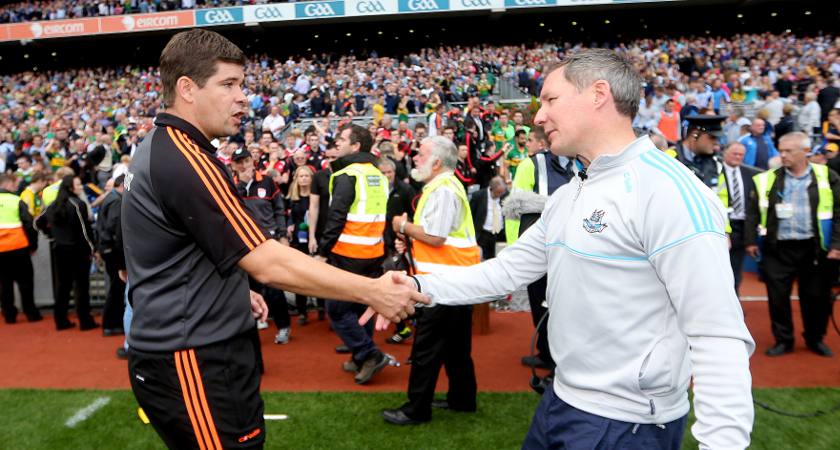 Eamonn Fitzmaurice, left, and Jim Gavin meet again at Croke Park this Sunday [Picture: Inpho]
"When you're going through the league, playing week in and week out or every second weekend, there's a bit of momentum there and you're changing, working on things and if you've an issue you're trying to polish it up in the next game and at the end of a run of games you've often made a good bit of progress.

"Whereas when the games come more sporadically, it's more of a challenge, but, look, we're in an All-Ireland semi-final and we've a good bit of improving to do."

They know it. Dublin know it too. “You always have to be wary of Kerry,” Jim Gavin, their manager, said last week.

“We are dealing with a reality here,” Crowley said, “which is that if we don’t get a couple of All-Irelands, people might start arguing that 2014 was a fluke. You need to move on.”

Sunday will determine if this wounded animal is still a dangerous one.