A YOUNG Everton fan has made a touching get well soon card for Seamus Coleman as shows of support pour in for the injured Irish captain.

Jake Livingstone, seven, quickly went about penning his best wishes to Coleman after he suffered a double leg break for the Republic of Ireland during the boys in green clash against Wales on Friday night.

Coleman, 28, was involved in a hard challenge with Wales full back Neil Taylor, who received a red card.

Soccer fan Jake, who is a season ticket holder at Coleman’s club side Everton, wrote: “To Coleman, I hope you get better soon. You're my favourite player.

“We will miss you so much and why does it have to be before the derby?

Coleman was given oxygen before being carried off at the Aviva Stadium on Friday night.

The Donegal native was taken by ambulance to St Vincent’s University Hospital immediately after the incident. 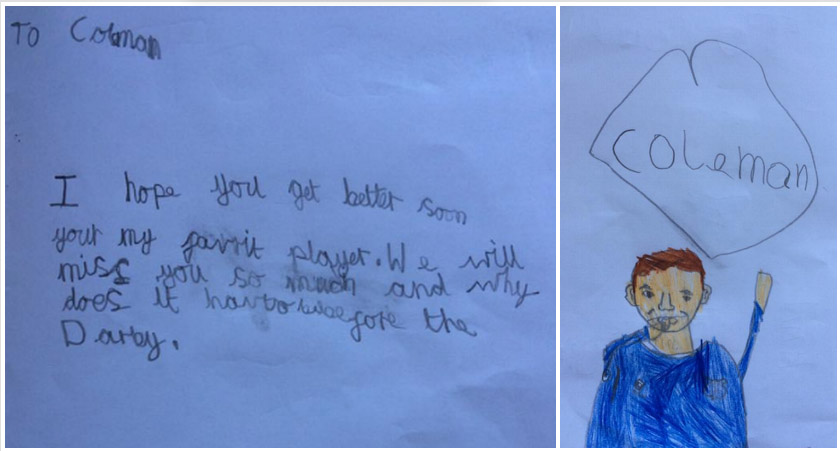 He underwent successful surgery to his right tibia and fibula on Saturday and is currently recovering.

It is not yet known exactly how long Coleman will be out for but it is likely that he will face at least six months on the sidelines.

FIFA will pay Coleman’s £50,000 per week wages until he fully recovers as part of their club protection programme.

Tributes to the right-back have come in thick and fast, with Everton teammate Leon Osman writing on the club’s website: “I’m absolutely gutted for him. I wish him all the best and a speedy recovery.

“Knowing him, though, he’ll come back better, fitter and stronger. That’s the type of character he is.”

Former team-mate Phil Neville said: “Not only a brilliant Right back but an amazing lad who will come back fitter, stronger and better than before.”

The injury to Coleman was so shocking that even fans of rival clubs threw their support behind the Irishman.

“Yes he plays for Everton but I seriously hope Seamus Coleman is okay,” tweeted one Liverpool fanzine.

“Forget f****ng football rivalry this is a seriously bad injury that nobody wants to see.”