Northern Ireland has something incredible in every blink of the eye

HOW wrong can you be? A gnawing sense of nervousness had bothered me about making a tour of Northern Ireland again, 31 years after I had arrived there as a young journalist with the mission to report on The Troubles.

My main ‘hotel’ in 1985 was the grim Ebrington Barracks, overlooking Derry, from which my hosts, the officers and men of the 1st Battalion Royal Anglian Regiment, chauffeured me round the city and countryside in a variety of armoured vehicles and unmarked saloon cars.

As the occasional bomb exploded and the odd bullet flew – one making a spidery hole through the commanding officer’s window – it was clear I wouldn’t be getting the ‘wider’ view which had been demanded by my news editor resting back on the mainland in his padded swivel seat.

Far from it. A journalist like me – with an Irish surname and parents who hailed from Leitrim and Mayo – may as well have put on a bullseye T-shirt for a stroll down the Bogside or Waterside seeking interviews in those chaotic days.

Despite such limitations, I was sent back again a couple of times soon after, ending up in South Armagh and Belfast for variety, before I protested and was despatched rapidly to the likes of Bosnia and Sierra Leone due to what was described as my ‘war zone expertise'.

I left all that behind some years ago, so I leapt at the chance of a post-Troubles road trip to wipe away all those memories and see the modern Northern Ireland in the raw. 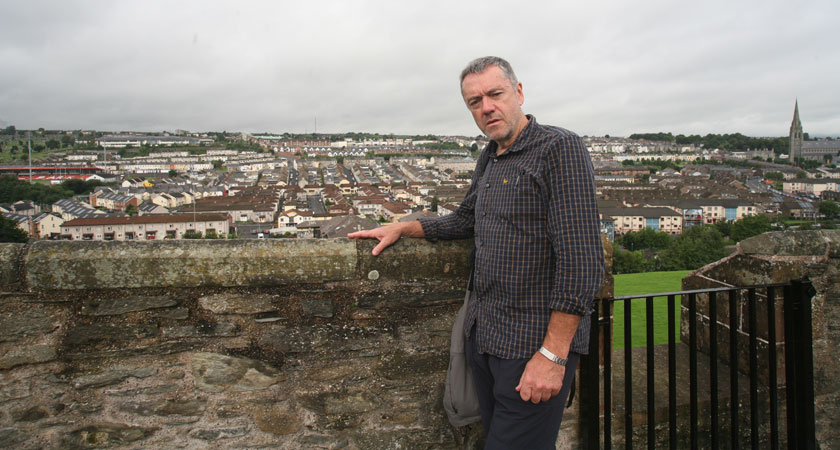 The result was stunning. My partner and photographer Sue Mountjoy marvelled at the tourism paradise we encountered, where we felt far safer and more welcome than in many towns and cities in Britain.

Since the 1998 Good Friday Agreement, many places outside of Belfast, can boast some of Western Europe’s lowest crime rates, despite the disproportionately huge headlines given to the occasional dissident attack or court case.

Despite that, a slight twinge of concern troubled me as we arrived at Belfast’s re-launched Europa – once the world’s most bombed hotels (29 at the last count) – and headed for dinner at the nearby Deanes Meat Locker, a deservedly-described ‘glamorous’ experience of fine food, including great steaks sourced from Hannan Meats, as well as fish and poultry, served with speed but also panache.

That gastronomic quality was obvious again the next morning in the Europa’s ‘Who made my breakfast?’ brochure detailing the local sourcing of everything on the waist-bursting fry-up from the Co. Down Honeybee sausages to the Antrim black and white puddings.

A post-feast stroll to the charming St George’s Market – named Britain's Best Large Indoor Market in 2014 – and, once again, local pride and skills were bursting out of the beautiful crafts, food and clothes stands, complemented by the live electric folk music rattling off the Victorian rafters. 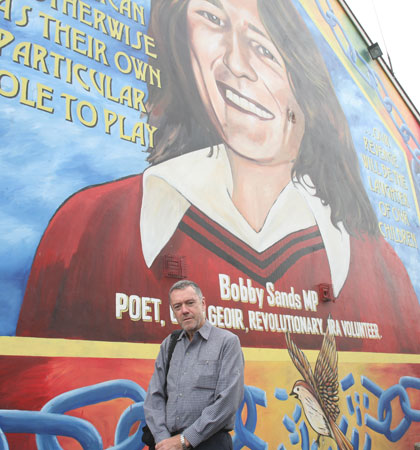 The city’s tourism gems, however, peak with Titanic Belfast, voted Europe’s top visitor attraction this year, which is a fascinating walk-through the design-to-sinking experience of the ship’s builders, crew and passengers.

Unlike many such whizz-bang modern museums, this truly does what it says on the tin (or should that be the one-inch thick mild steel?).

Belfast is definitely chatty. And an experience of the chattiest local native can be had in one of the Black Cab tours, where your driver (our guy was John, a Catholic, sporting bullet-damaged front teeth) will whizz you round the key points of The Troubles with a 100-miles-an-hour commentary – from his viewpoint, of course.

Three decades ago, such a trip would very probably have been one-way for a journalist like me, so this was a novelty, even though some locals told me later that they felt it was simply perpetuating and exploiting the chaos of the past.

I felt a twinge of guilt about taking the tour as we marvelled at the sights heading north along the 120-mile Causeway Coastal Route, voted one of the five finest road trips on earth.

From picture postcard coastal villages like Carnlough and Ballintoy to the mystical Glens of Antrim and the Carrick-a-Rede rope bridge, you can lose yourself in the beauty and peace. 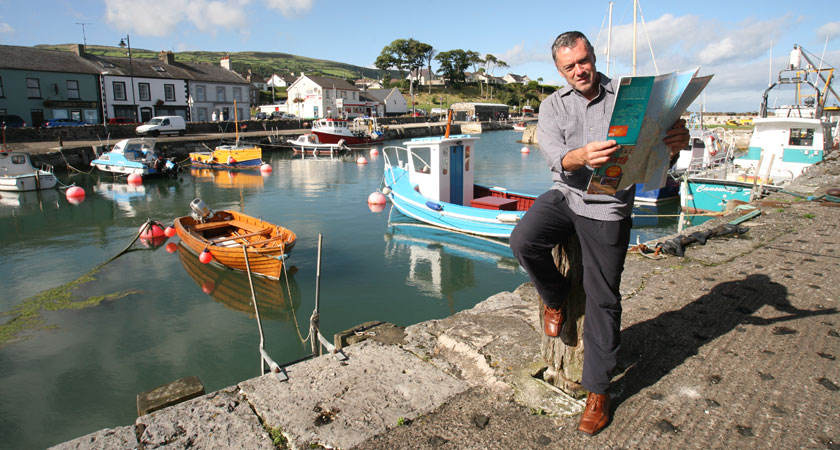 As we whizzed through a journey that would need a full fortnight to savour properly, we soaked up the wonderful Giant’s Causeway centre and the ‘roller coaster’ Torr Head Road – the closest point to Scotland – where we burst into a verse of Mull of Kintyre as it appeared on the horizon. 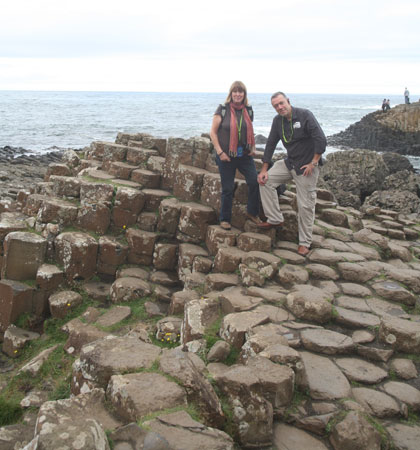 Pausing to take in the phenomenal Giant’s Causeway

We bought a bottle of subtle vintage Bushmills from the distillery before heading for Derry and the classily-restored 1899 Bishop’s Gate Hotel, a building that started out as a club for local gentry who had battered the Russians during the Crimean War.

It was war of a different kind which had last brought me to the city, but this was now a city at peace, no more evident than the next day on a City Wall tour where the British Army watchtowers, anti-bomb cages and surveillance camera sites had all disappeared.

Our final day brought us to the Georgian gem of Armagh, Ireland’s ecclesiastical capital, through the rolling and mysterious Sperrin Mountains and the vast and amazing (although badly named) Ulster American Folk Park, which, in dozens of rebuilt homes, takes you through the tragic exodus of countless Irish people to the United States over the last three centuries.

I once said New Zealand had wonder at every bend, but it’s no exaggeration to say Northern Ireland has something incredible in every blink of the eye – some in the history and landscape, some in its manmade attractions, but a great deal in its welcoming and chatterbox people.

Of the latter – too many to mention – Sue labelled them as NITS: not the flying and biting variety, simply Northern Ireland Tourist Supporters.

At every turn, they helped us to find the way and chatted and joked non-stop as if we were guests in their living rooms.

Typical was former policeman Andy Robinson, who was in his first season as the National Trust attendant at Portstewart Strand. 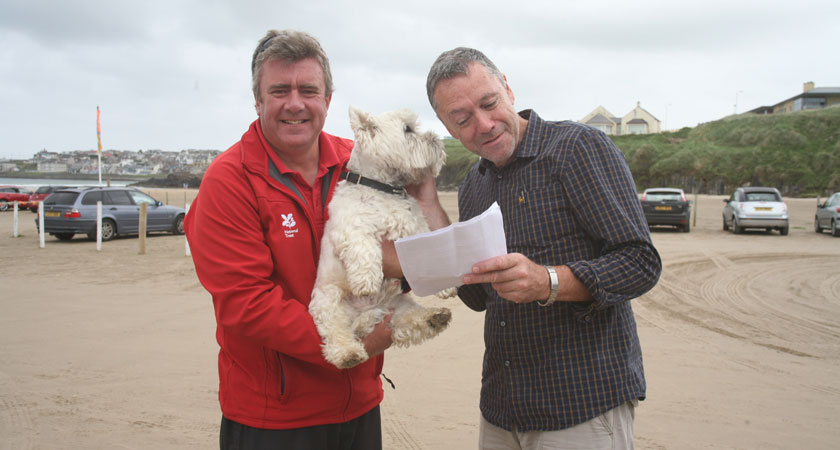 When we got lost, he spent ages chatting and advising us about the best places to go next, cuddling his West Highland terrier, while standing on the beach he described as ’the best office in the world'.

A peaceful man in a land now truly at peace and with a welcome sign on every doormat.

If you thinking of a visit, tap into the main tourism site www.discovernorthernireland.com for great itinerary ideas, practical information, such as flights and accommodation, and contact details.

Plenty of cut-price flights to Belfast are available from several British airports and operators at websites including www.skyscanner.net. Autumn car-hire deals are also available from operators like www.avis.co.uk