Sandcastle-perfect or forbidding fort, Ireland is home to some of the world's most intoxicating castles

Dunluce Castle in Co. Antrim is one of the world's great forts

ONCE upon a time you could get a grant of £10 to build a castle in Ireland.

In the 15th century Edward VI promised a tenner to anyone putting up a castle order to strengthen the boundaries of The Pale.

That was, as you might imagine, a sizeable sum back then. So, coupled with the pressing incentive of protecting family and belongings, castles went up with alacrity.

One of the world’s great forts, Dunluce Castle – intoxicatingly remote – clings to the precipitous rocks of the Antrim coast.

Separated from the mainland by a dangerous chasm, it had been a fort since pre-Christian times, but was turned into the forbidding castle it is today by the Normans.

Dunluce has film star good looks and has featured in productions such as Game of Thrones where it is Castle Greyjoy, as well as being the inspiration for Cair Paravel in C. S. Lewis’s Chronicles of Narnia.

A few miles to the south east, stands Carrickfergus Castle, guarding the seashore and standing uant against the Irish Sea.

King John’s Castle in Carlingford, Co. Louth, is almost sandcastle perfect. Nestling below the Cooleys and overlooking Carlingford Lough, Norman soldiers would have kept a careful look out for marauders. Built in the 13th century, much of the castle remains intact.

There is also a King John’s Castle to be found in Co. Limerick. A 13th century castle, located on Kings Island, next to the River Shannon, this is a popular site for locals and tourists – bringing 800 years of local history to life with a visitor centre and interpretive activities and exhibitions.

In Co. Armagh, the threatening hulk of Moyry Castle guards the lands round Kilnasaggart just outside Jonesborough. Nearby stands what is probably the oldest Christian field monument in Ireland, and one of the oldest in the whole of Europe outside Rome.

Marking the site of an early cemetery, the monument is set in a peaceful glen which is home to a legend – a crock of gold is buried below the pillar.

Overturned by treasure seekers in the 1830s, it was reset shortly afterwards. The gold, fortunately, wasn’t found. So, keep your eyes peeled.

By the seaside or on top of a substantial rock are the favourite places to build castles – it’s not hard to work out why; one offers easy access, the other no access; both important considerations in any squabble with determined foes. 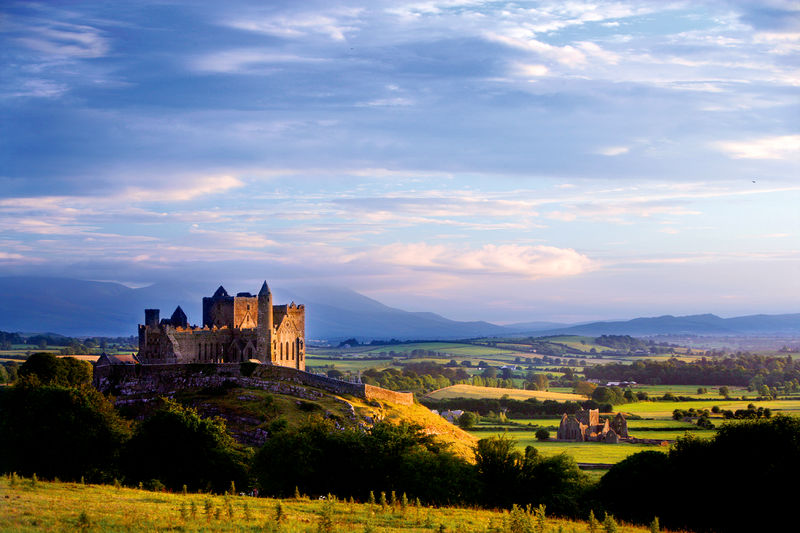 The operatic grandeur of the Rock of Cashel with its fairytale turrets and crenellation dominates the surrounding lands of Kildare, while Dunguaire Castle in Co. Galway dates back to 1520.

Kilkenny Castle is up there with Edinburgh Castle, the Tower of London or Mad Ludwig’s Castle in Bavaria as one of the great castles of the world, a 12th century fortification remodelled in Victorian times.

At Bunratty Castle you’ll be able to experience a rip-roaring banquet with music, wine and feasting – plus legends, ghosts and tall tales, hidden behind the time-darkened walls.

These demesnes were soon developed to include groomed parkland and magnificent gardens such as Powerscourt Gardens in Co. Wicklow.

Legends, ghosts, history and tall tales are all hidden in the grey stones which make up this integral part of Ireland’s landscape.

No further coronavirus deaths and just 53 new cases in Ireland