THE year 2022 will see several new developments for visitors to the island of Ireland.

Linen Mill Studios in Banbridge, home to the world’s only officially licensed Game of Thrones Studio Tour, has been transformed into an interactive visitor attraction.

Authentic sets, props and costumes from your favourite Throney characters.

The Lannisters, Daenerys Targaryen or the Baratheons will not have had to bother about passports or document checks — but it’s worth mentioning that the likes of Banbridge in Northern Ireland, Dublin - the Irish capital, and, for example, Holyhead in Wales are all part of the Common Travel Area.

This dates back almost 100 years, so not quite as long ago as the Battle of Whispering Woods (a Game of Thrones set piece filmed in Co. Down) but it does mean that British and Irish citizens can travel within Ireland, Northern Ireland and Britain with only personal identification documents required for sea carriers/flight operators when making travel bookings and at check in.

Originally a Victorian concern, the Linen Mill in Banbridge suffered a severe decline in its traditional business in recent decades.

US network HBO stepped in and turned the substantial space into studios.

Subsequently around one third of Game of Thrones filming in Northern Ireland took place in the former mill.

In Belfast, the development of the Titanic Quarter continues apace.

The Visitor Centre expertly navigates through Belfast’s maritime history from the 1600s to the completion of Titanic.

In Dublin, the 18th century architectural gem that is the Custom House has quite the story to tell.

A fascinating exhibition brings the construction, burning and restoration of the building to life. 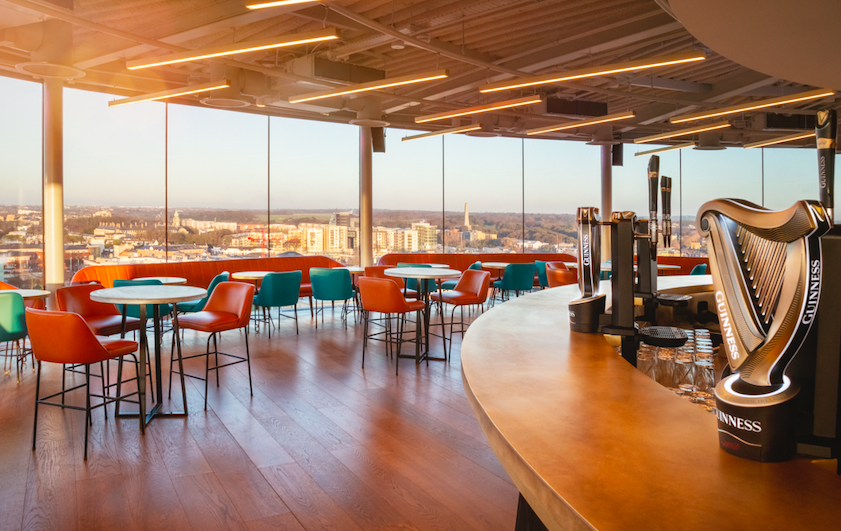 The Gravity Bar at the Guinness Storehouse Dublin

Dublin’s other essential visits for 2022 include:

EPIC Ireland, awarded Leading European Visitor Attraction at the World Travel Awards for the third year in a row.

A key diaspora attraction, the Irish Emigration Museum is an interactive experience featuring 1500 years of Irish history and marking some of the greatest achievements of the scattered Irish — in music, literature, sport, politics, fashion and science.

Kilmainham Gaol opened for business in 1796 and remained operational until 1924.

Many Irish leaders of rebellions, including the 1916 Easter Rising, were incarcerated and executed here.

In this city of over-achievers in the literary field several museums are dedicated to writing. The Writers’ Museum features manuscripts and memorabilia from Goldsmith, Stoker and Swift, as well as Ireland’s four Literary Nobel Laureates –Yeats, Shaw, Beckett and Seamus Heaney.

Trinity College Dublin is home to the Book of Armagh and some 450 other priceless medieval Latin manuscripts — including the most famous of them all, the Book of Kells.

No trip to Dublin would be complete without a visit to the Guinness Storehouse.

The secrets of stout production, how roast barley gives Guinness its deep ruby colour, and how a perfect pint is pulled are gone into in some detail.

The tour ends in the Gravity Bar – a drinking establishment with a panoramic view across the city, and the perfect place to contemplate the city, have a pint, ponder the meaning of life, have a few more pints, discuss with your friends whether this is the best day you've ever had in your life, and. . . have another pint.

The Hugh Lane Gallery in Dublin houses one of Ireland's foremost collections of modern and contemporary art. 2,000 works are on display, ranging from the Impressionist masterpieces of Manet, Monet, Renoir and Degas to works by leading international contemporary artists, alongside examples Bauhaus and Dadaism.

The museum has a wing dedicated to Dublin-born artist Francis Bacon, the man who said, “I should have been, I don’t know, a conman, a robber or a prostitute. But it was vanity that made me choose painting, vanity and chance”.

The Little Museum of Dublin is an exhibition of life in the capital, quirks, warts and all.

Set in a Georgian townhouse on the edge of St Stephen’s Green, this museum will take you on an idiosyncratic cultural journey through the last century.

The historic GPO in O'Connell Street features a decorated frieze above the portico, topped by three statues — Hibernia, Mercury and Fidelity.

Visiting tourists used to be told by locals that these were the 12 apostles.

When it was pointed out that there were only three, the reply was that the others were inside, sorting the mail.

But it’s also a great day out. Covering over 28 hectares it’s divided into various habitats from African Plains to Sea Lion Cove.

Christ Church is the oldest cathedral in Dublin.

Built around 1169 by Strongbow, the Norman-Welsh leader's last resting place is reputed to be in the cathedral.

Always check the latest travel and public health advice and gov.ie, nidirect.gov.uk and Ireland.com for information and inspiration