A week in picturesque Puglia – the rustic heel of Italy's boot

PUGLIA, pronounced ‘Poolia’ but in reality the Italian region of Apulia, is the heel on Italy’s boot. On a map it looks like the end of the line, but for centuries this was a stepping-stone to the Holy Land.

Medieval Crusaders would stop off here while their enemies, folk like the Saracens, would try to stop them reaching omni-coveted Jerusalem. Thank goodness that’s all sorted out.

Puglia became the staging post for those great uninvited guests of the ancient world: Greeks, Phoenicians, Cretans, Normans, the Angevins. They all fetched up here, on the way to somewhere else. The region became, in effect, a staging post; the Didcot of the Mediterranean.

But now Puglia’s stand-alone charms are being recognised in their own right. Its medieval towns and cities are, by and large, still run on behalf of the locals and not the tourists, immediately giving them that hard to pin down quality, charm. Many, such as Locorotondo or Martina Franca with their bonkers baroque architecture, could be contenders for the title of most beautiful town in Italy. 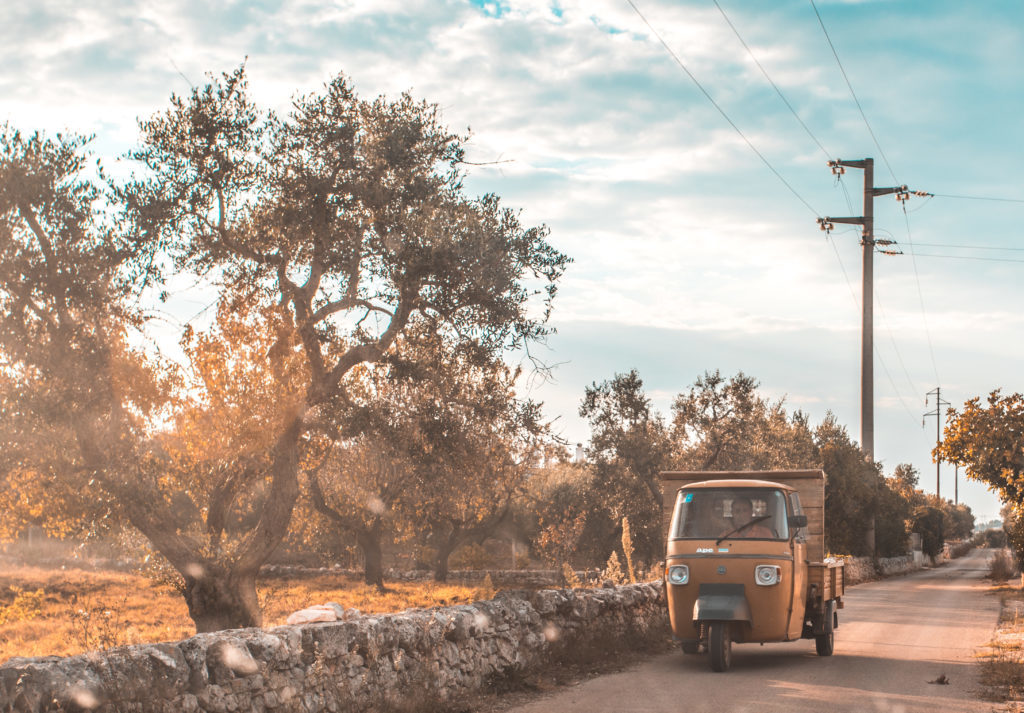 The coastline is beguiling, and quite gentle — apart from the medieval watchtowers. Beaches which stretch to the southern tip of the region are lined with long strands of talc-fine sand. The weather is perfect for beach holidays — occasionally a sirocco from north Africa raises temperatures a little high — but go in October, as we did, and you’ll bask in perfect weather, on beaches shared with only a handful of locals.

Inland, the landscape is not spectacular, to be honest — it works too hard for a living to be beautiful. Vineyards, gnarled olive trees, stone walls festooned with lichens, laneways of red clay running through fields of almond trees — that’s pretty much it.

This is benign countryside, but with one USP — trulli, or dry-stone, conical houses. These strange circular dwellings are built without mortar — or originally were. There are over 1,000 of them in the town of Alberobello, a UNESCO-designated place. The town is to trulli what skyscrapers are to New York.

What the origins are, and why they only appear in the stiletto heel of Italy, is unclear. One reason is perhaps that if an earthquake threatens — not unknown in Puglia  — the stones shift as there’s no mortar to cause internal stress. Being in an earthquake can be frightening. One local told me “it’s like going out of your house, closing the door, and having the house follow you down the street”.

But a wariness of earth tremors barely accounts for the fact that these trulli have no counterpart anywhere else on earth. 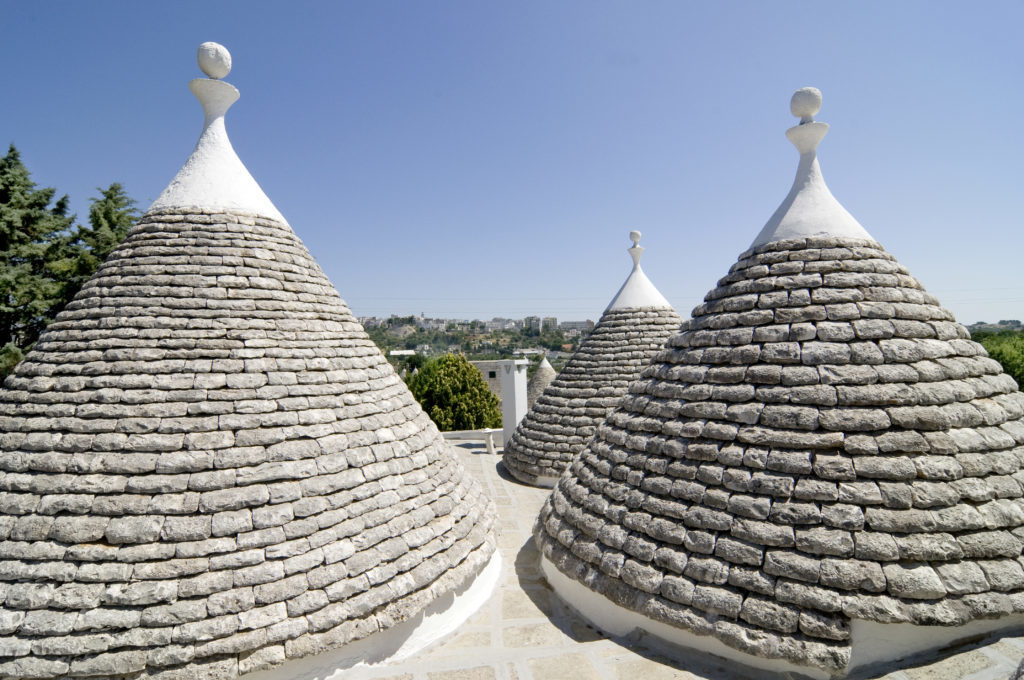 The roofs of Cisternino are a unique sight to behold (Image: Mal Rogers)

Another explanation goes that in medieval times the houses could be dismantled at speed. This was back when houses would be taxed, so removing the buildings meant tax withheld.

But whether the trulli owe their existence to tectonic plates or tax avoidance, they remain a fascinating feature of the landscape.

And we were staying in one. Or to be more accurate, four.

Trulli dei Pini, a villa looking out towards the ancient town of Cisternino, is constructed round a quartet of trulli. But it comes with many amenities not normally associated with buildings from the Middle Ages — not least the generous-sized swimming pool.

In the evening, you can float on your back, splash yourself gently with water, and watch the sun set over the old town. You need only get out to replenish your prosecco or check the barbecue is smouldering nicely.

A word of warning, however, about getting about the Cisternino area. Navigation in these parts is devilishly tricky. The SatNav is redundant, the road signs are (to foreign eyes) inexplicable, and the map seems to have only a nodding acquaintance with the terrain. If you happen to be on a deep witness protection programme this could be the place for you.

The villa, however, is beyond reproach. 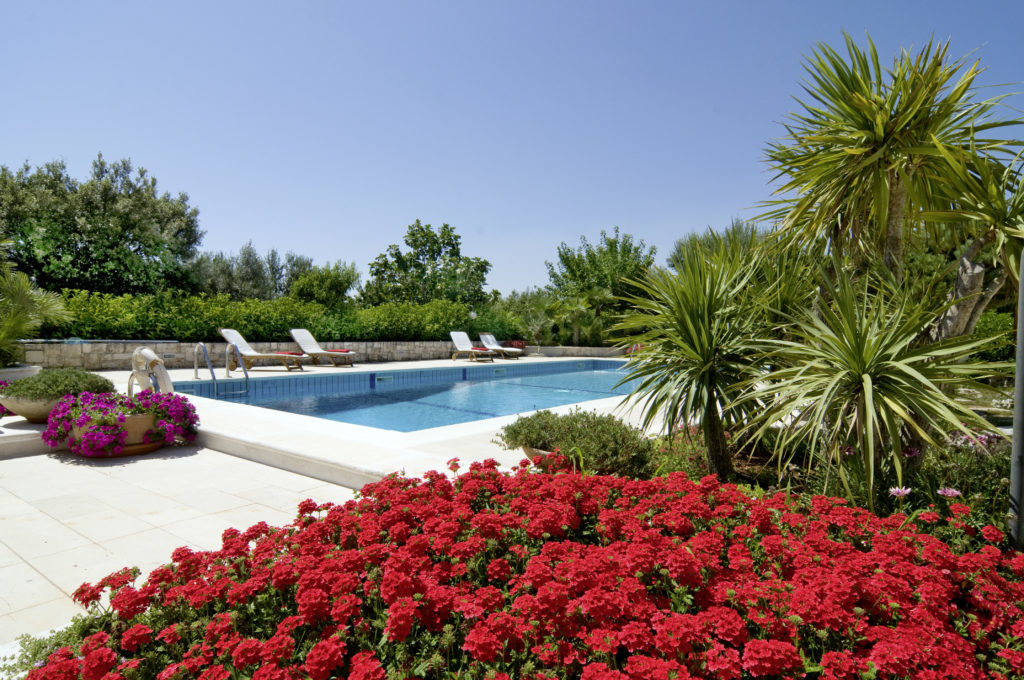 The owner Nicola Calella gave me a conducted tour of the dei Pini estate. He has 83 olive trees — seems to know the exact age of every single one. “Olives are at the very heart of Puglia,” he said as he lovingly stroked one of the oldest trees. It was probably there when the Crusaders were passing through.

At the side of the olive grove another tree produces the largest, and sweetest persimmons I have ever come across. A persimmon is like a giant ball of syrup, and utterly delicious with the locally-produced yoghurt.

Nicola said help yourself — I did — and you need have no worries about insecticides or additives in the olives, pomegranates, peaches, oranges and other abundant fruitiness. This is an entirely organic orchard; also a working one.

Each olive tree produces the equivalent of about 4 large bottles of oil annually. Naturally, there are bottles to use in the villa — you’ll find them just beside the carafes of local wine. They’ve all probably been replenished by now.

Trulli del is about equidistant from the two great ports of Puglia, Brindisi and Taranto, linked by the Appian Way.

We set out on this ancient superhighway (which leads to Rome, as per the old saying) heading towards the Adriatic coast and Monopoli, an old fishing port. 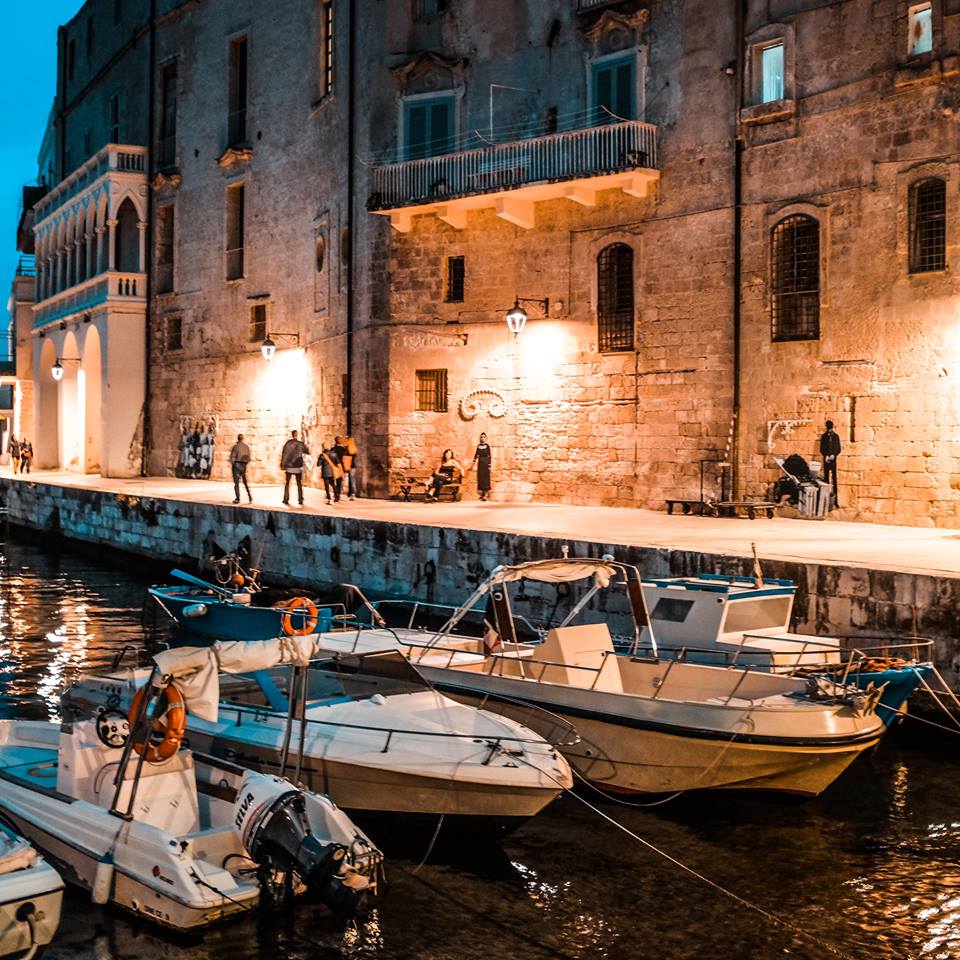 The harbour at Monopoli on the Adriatic Coast (Image: Mal Rogers)

As we neared the town, it occurred to is — this is the sort of place you could probably get some grilled monkfish, served with orrechiette pasta, mixed with broccoli, and maybe a smidgen of chopped garlic.

In the town square, at Vini e Panini they had exactly that on the menu.

To get there it was a walk along the promenade before passing through the walls of the old harbour. A large crowd had gathered. The evening Passeggiata, we assumed, when the whole town strolls about, chatting, laughing and flirting. But no, it soon became clear that this was something more. It was the shouting that first alerted me, plus an awful lot of gesticulating, and quite a bit of laughter.

All was readily explained. A lady in the crowd told me with some glee that four ‘idiotas’ from Bari had driven along the promenade and plunged into the harbour. They all survived, but now the tricky job of removing the car was giving the crowd great enjoyment. I was tempted to begin gesticulating too, joining in with the shouts of advice to firemen and police. 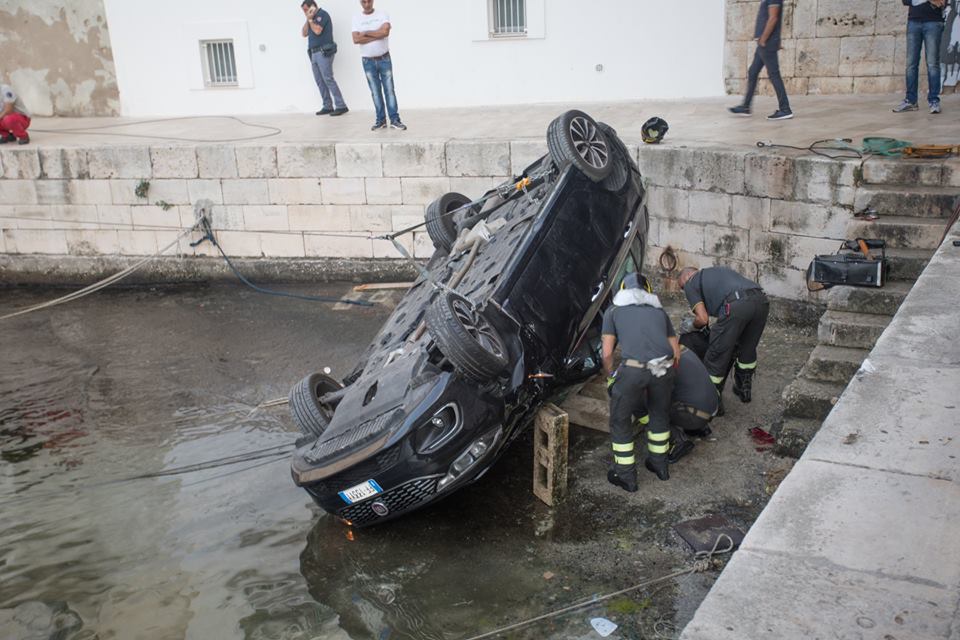 The aftermath of the incident at the harbour (Image: Mal Rogers)

But then we heard it. The unmistakable sound of a brass band. Definitely a marching band. Good grief. The car incident was such a singular event that they’d turned out the town band.

I immediately headed for the source of the beating drums and blaring brass. But transpired this was, in fact, a religious parade. A little statue was being carried through the town with great ceremony, accompanied by a brass band. It was St Francis’s Feast Day, a local told me, showing me a picture of the saint in case I doubted it.

I thanked him, and headed for my monkfish and pasta. Ideally, I hoped, lots of it.

In reality, if you’re staying at Trulli dei Pini, you probably don’t want to spend too much time on the Appian Way, or any of the other great routes of the Roman Empire. Especially if you’re looking for somewhere to eat. Just down the road from the villa — within walking distance — is a pilgrimage-worthy restaurant Osteria Sant’Anna.

On the edge of Cisternino this restored masseria, or fortified farmhouse, has an elegant dining room. The food ranges from the most delicate of pizzas to over-sized plates of mussels gratin. And at the meal’s end, some very moreish local liqueurs. You could happily eat here every day of your holiday. Of your life, maybe. 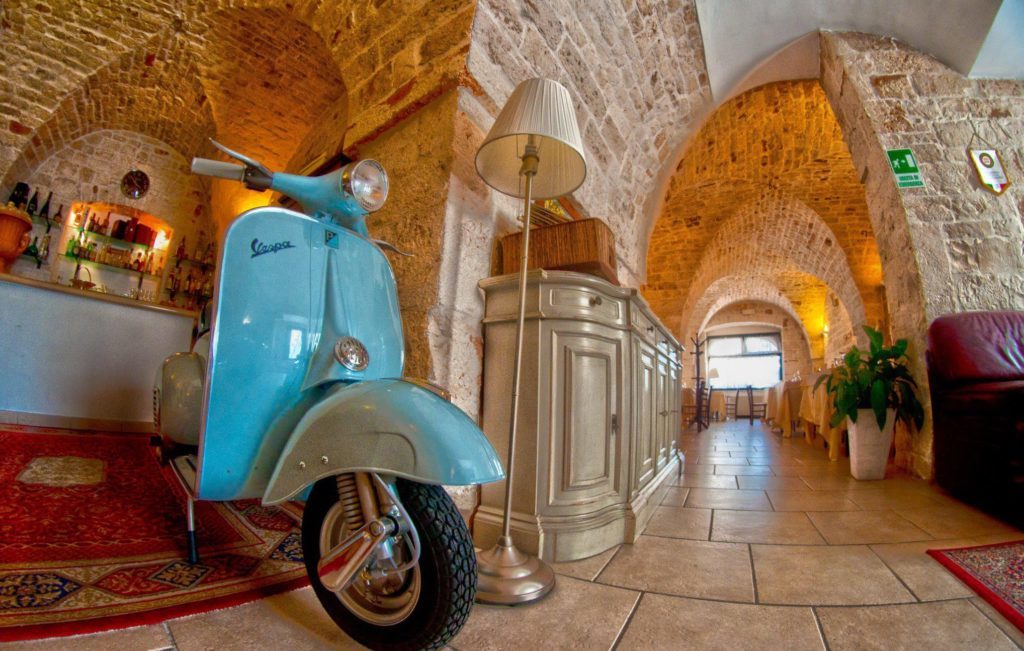 Worthy of a pilgrimage: Osteria Sant’Anna in Cisternino (Image: Facebook)

Puglia is, to dust down that useful cliché, undiscovered Italy. Arguably, it enjoyed a higher profile during the Middle Ages with all that derring-do than it does today.

The tourists have begun arriving, but if you’re an Italian region in the market for visitors, and your competition is Rome or Venice, then you’re gonna struggle. Florence gave birth to the Renaissance, Cremona gave the world the violin, Naples the mandolin — plus the pizza for good measure. Puglia — not so much.

But the region has plenty going for it. We visited on a week when at the other end of the country Venetian locals had gathered in the Venice lagoon to protest at the arrival of cruise ships. They made their presence felt alright, although being Italians they used fireworks and flags — sadly, many of the passengers aboard the liners thought their cruise was being welcomed in spectacular fashion, and cheered until the truth dawned.

Puglia: nothing like that. Nobody threw a firework at us; people were unfailingly friendly, the towns were uncrowded and unhurried, the food exemplary.

According to local wisdom, visitors to Puglia cry three times: when they arrive, when they leave and when they get on the scales. That’s about right.

We stayed at Trulli dei Pini in Puglia, close to Cisternino. The villa sleeps up to eight people and is priced from €340 pp (€2,720 in total) for a seven-night stay, including maid service and welcome pack. CV Villas can also arrange flights, transfers or car hire for an extra fee. For more information, contact CV Villas on 00 44 207 261 5401 or visit www.cvvillas.com.

Summer holidays Ireland: Which countries can I fly to without having to quarantine?