Harper Lee's tale is told from the perspective of the children (Pic: Marc Brenner)

So says stage stalwart Niall Buggy who is about to join the company of To Kill a Mockingbird in London’s West End.

On Monday, August 15 the Dublin-born actor, who has been living in London for more than 50 years, will replace Jim Norton in the role of Judge Taylor in Aaron Sorkin’s adaptation of the Harper Lee classic.

That same day Richard Coyle replaces Rafe Spall as Atticus Finch in the London production, directed by Bartlett Sher, which has drawn a packed house at the Gielgud Theatre since it opened in March. 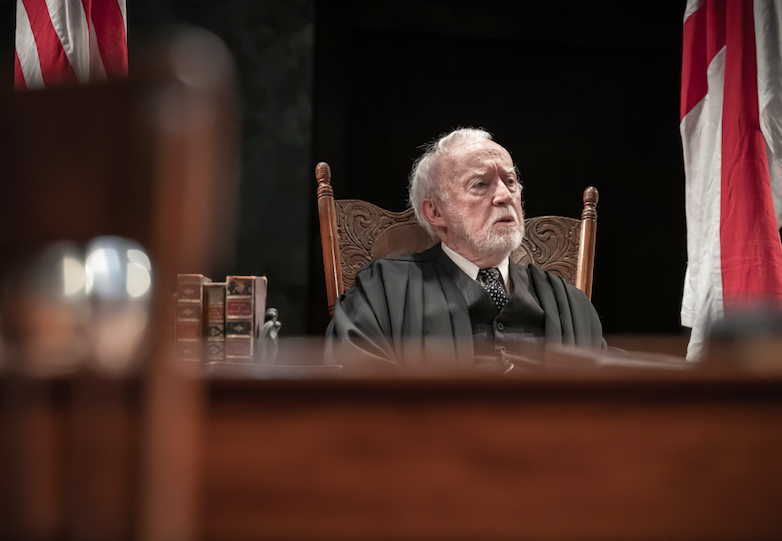 Niall Buggy is about to replace Jim Norton, pictured, in the role of Judge Taylor in the West End production - (Pic: Marc Brenner)

“I was asked if I would take over the Judge Taylor role, so I went to see the play and of course I was blown away by it, it’s such an incredible production,” Mr Buggy told The Irish Post this week.

“It’s brilliantly done, and I thought, although it is nerve-wracking, as one is taking over a role in a relatively short space of time, it is also very exciting.

“I had to do it, it’s such an extraordinary story and one that is very important now.

“It always has been and always will be I would presume. It remains important for us all, generation after generation.” 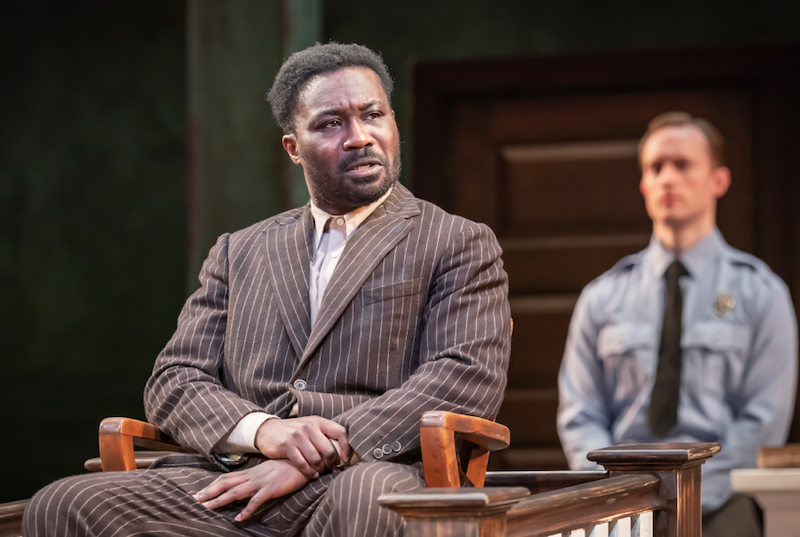 It was an immediate success - winning the Pulitzer Prize and being published in ten languages within a year of its release.

Considered one of the great classics of modern American literature, the book went on to become a global phenomenon – with more than 50 million copies of it in print today.

Set in Alabama in 1934, the story has provided literature with some of its most iconic characters – including lawyer Atticus Finch, the tragically wronged Tom Robinson, Atticus’ daughter Scout, her brother Jem, the reclusive Arthur ‘Boo’ Radley and the sympathetic Judge Taylor.

Told from the perspective of the children, it’s a weighty tale, with much to tell. 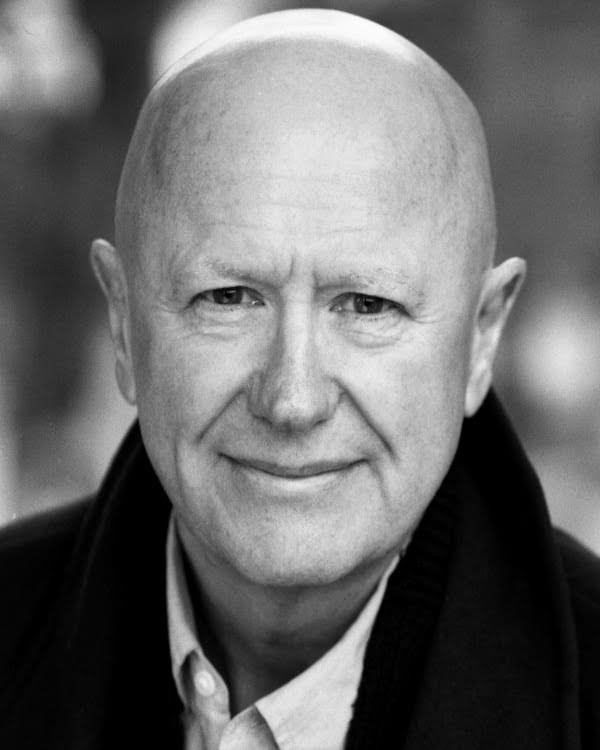 So how does it translate on the stage?

“In the book Tom Robinson’s trial scene dominates the whole story, but Aaron Sorkin, in this play, moves the story from Atticus’ house to the court,” Mr Buggy explains.

“It goes back and forth, it doesn’t remain in the court for the whole of the play – it goes from one to the other and you hear the children telling the story to you, which is exciting and interesting.

“Seeing it from a child’s perspective is a vital part of the story of To Kill a Mockingbird,” he adds.

“Did you know that mockingbirds don’t have any aggression in them?” the actor asks.

“Most birds have some aggression in them, but mockingbirds don’t have that, so I’ve been told.

“We don’t have mockingbirds in this country, but they do in the US, you have them in New York, you can come across them there.

“That is so interesting, to me, it must have been something Harper Lee thought about when she was writing the book.” 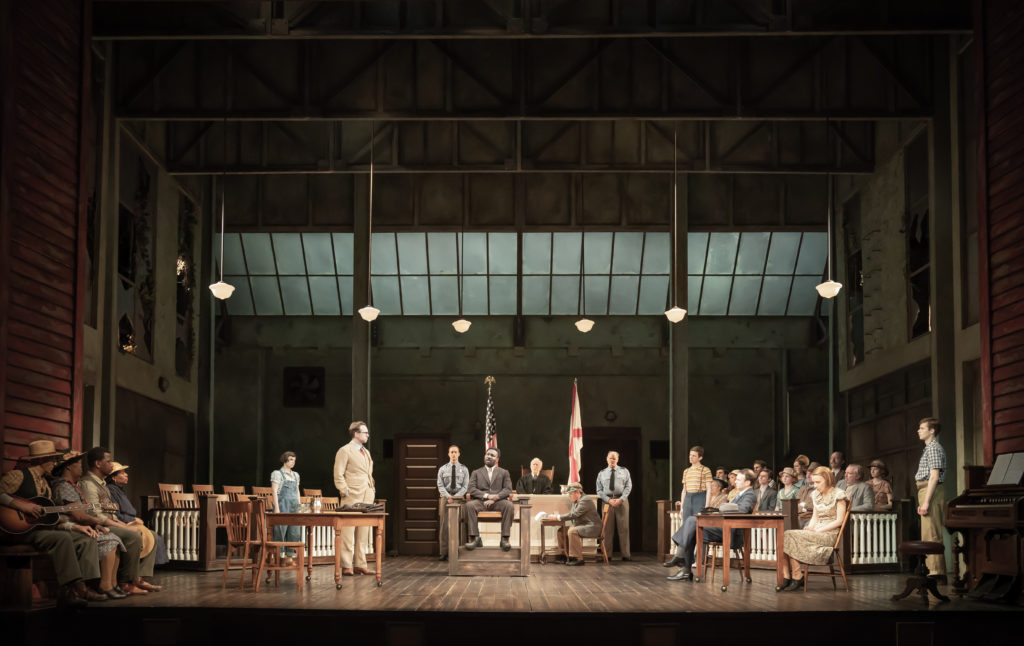 The visionary author, who died in her hometown of Monroeville, Alabama in 2016, at the age of 89, famously avoided all publicity around her iconic book, despite its worldwide success.

It seemed she preferred her characters to do the talking.

In Judge Taylor she created a man who attempted to go against the grain at a time where many of his peers would have been openly racist.

“My character would have been brought up in a generation that was definitely racist and probably pro-slavery really, but he comes from his own soul, telling a different story,” Mr Buggy claims.

“There were a few of these white men around at that time, one of them Judge Frank Johnson, the attorney who supported Rosa Parks in her civil rights case.

“Of course, Judge Taylor does not get Tom Robinson off, and that’s a very shocking aspect of this story,” he adds.

“Neither does Atticus Finch get him off, it is shocking, really.” 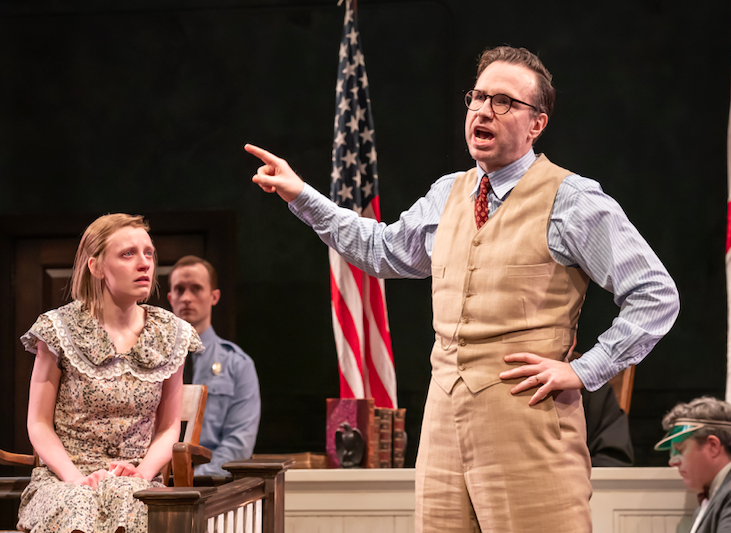 Rafe Spall, pictured in the role of Atticus Finch, will be replaced by Richard Coyle on August 15 (Pic: Marc Brenner)

As with Lee’s book, there is plenty to keep the audience thinking once they leave the play, according to the actor.

“There are many stories in the play that are interesting to discuss and be thought out after you leave the theatre,” Mr Buggy says.

“Its important to have plays like this on the stage,” he adds, “vitally important.”

“The interesting thing about To Kill a Mockingbird at this moment is the fact that it is packing out in the West End,” he adds.

“The West End is not doing great at this time, but this play is packing out and it’s because of the story, it is the story that is doing it.

“And the telling of the story, that is also what is doing it.

“It is a very interesting, engaging evening out,” Mr Buggy explains.

“It’s that old thing that we do in Ireland called story-telling. Story-telling is the greatest old-fashioned aspect of theatre really.

“This play, this production is bringing that forward and letting that go on and I think that is why it is such a success with the public.”

The show’s popularity so far means some stage nerves linger for Mr Buggy as he prepares to begin his time as Judge Taylor.

“I’ve never come into a play in the middle of a run, never in my life,” he admits.

“The company have been incredibly kind to both Richard [Coyle] and myself though. They have been coming in and rehearsing with us although they are doing shows.

“It’s a bit nerve-wracking still,” he laughs, “but we will try and survive it as best we can.”

For Mr Buggy the play adds to a long list of iconic productions that he has been involved in throughout his lengthy career.

Over more than 50 years in the business, he has appeared in the likes of Samuel Beckett’s Krapp’s Last Tape, Seán O’Casey’s The Plough and the Stars, Sebastian Barry’s On Blueberry Hill and Translations and Aristocrats, both by Brian Friel.

Is he particularly drawn to classic, critically acclaimed texts?

“Oh, you know actors don’t make choices, they just get the jobs or not,” he admits.

“But I have been very lucky in the roles I have had over the years.

“I have done some wonderful plays over the years, and this is a wonderful play too, which I am very lucky to be doing, as I am lucky to continue to work and go on.

“I’ve never done anything else [but acting] really.” 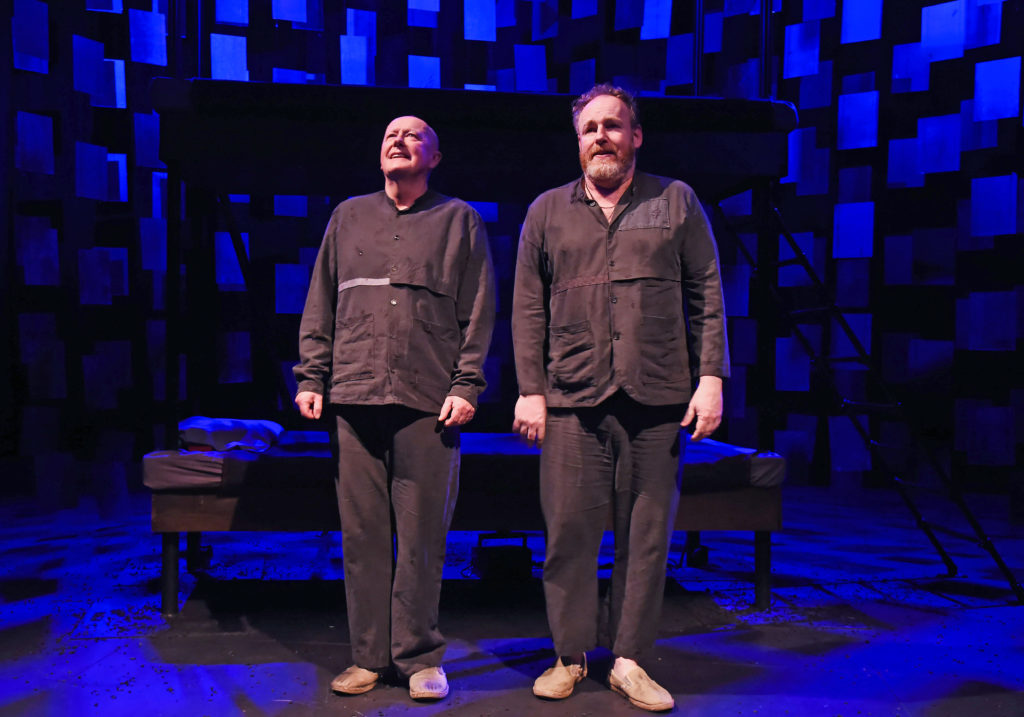 “I was very lucky during the pandemic,” he admits, “I was working throughout.”

“I did a small part in a film where I played Maggie Smith’s husband,” he explains of his work on 2020 film The Miracle Club, which has yet to be released.

“It was wonderful to be working with her,” he adds.

“I had one day where it was just myself and herself for the whole day and that was a joy.

So, what are the other highlights of his career so far?

“Well Blueberry Hill was a highlight and so was Aristocrats by Brian Friel and Translations too,” he says.

“But I have been very lucky that these are all wonderful plays. They are extraordinary pieces of work that I think are life enhancing.

“They give something to our lives that enhance it enormously – whether you are on the stage or in the audience, and that’s always important in this line of work.”

Catch Niall Buggy in To Kill a Mockingbird at London’s Gielgud Theatre from Monday, August 15 - for tickets click here