A FAMILY archive of Ireland’s national theatre created by one of its most charismatic characters has been sold at auction.

The collection relating to the Abbey Theatre during the first half of the 20th century is a treasure trove of photographs, programmes, drawings and memories of the influential Dublin players.

It is an especially significant archive as the contents shine a light on the theatre’s rich heritage in the years before the original building was engulfed by fire in 1951.

Catalogued across five lots, the ‘eclectic’ collection went under the hammer at Richard Winterton Auctioneers’ Winter Fine Art Sale on November 9, at The Lichfield Auction Centre in Staffordshire in the West Midlands.

Founded by WB Yeats and Lady Augusta Gregory in 1904 as a national theatre for Ireland, The Abbey Theatre’s ‘revolutionary’ beginnings to tell the Irish story continues today with a mission to produce urgent, ambitious and courageous work. 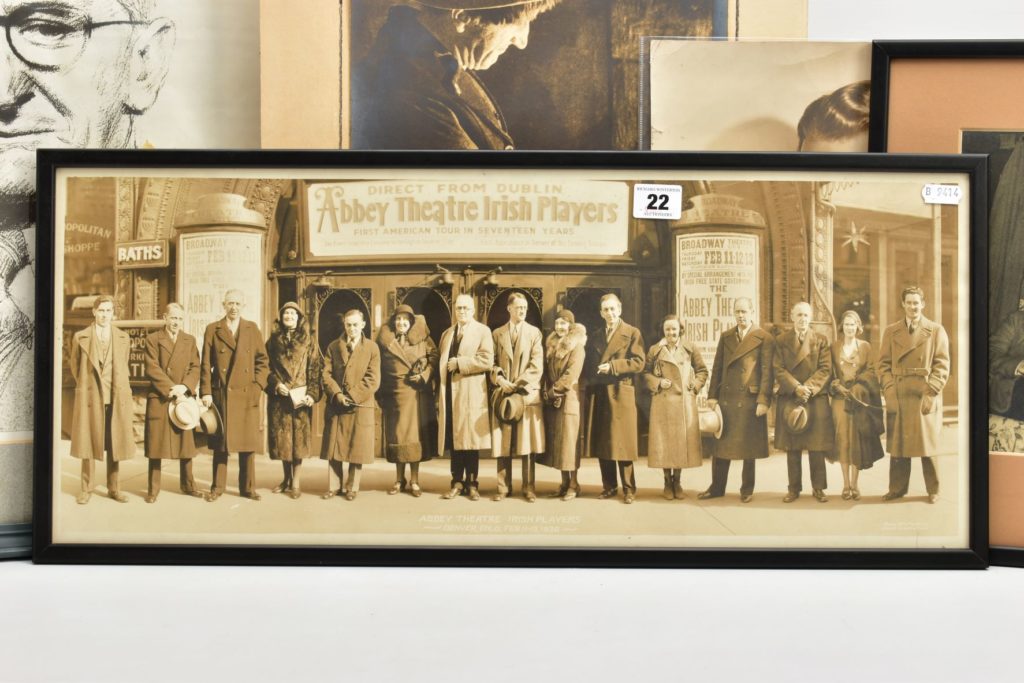 Yeats’ presence proliferates through the remarkable archive, initially compiled by distinguished Irish actor Michael Dolan and consigned for auction this month by his granddaughter Lorraine Biggs.

A lead player at the Abbey in the 1920s, who toured America with the company, Dolan also took on the roles of stage manager, general manager and director at the theatre.

Towards the end of his career he appeared in Hollywood movies such as Saints and Sinners (1949), the 1951 adaptation of Scrooge starring Alastair Sim and Captain Horatio Hornblower starring Gregory Peck, also 1951.
Dolan played the doctor in Hornblower and his own hand-annotated script featured in the auction, as did an original still from Saints and Sinners.

When he died in Dublin at the age of 70 in 1954, Mr Dolan’s archive passed to his daughter Patricia, who kept it meticulously and continued to add to it.

Following Patricia’s death in 2000, it was inherited by her daughter Lorraine. 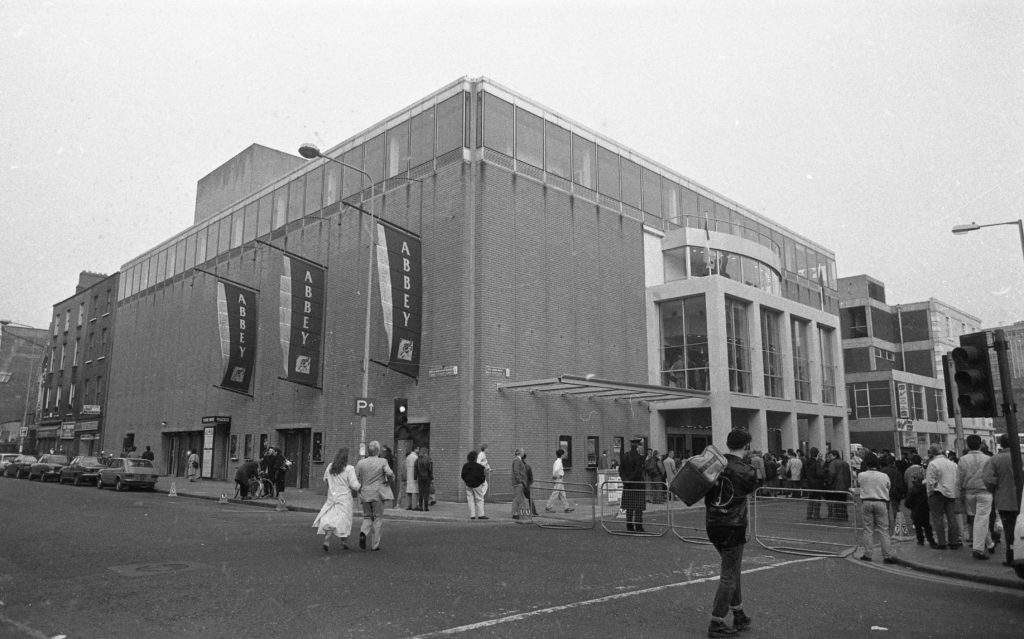 The iconic Abbey Theatre in Dublin

“My mother was meticulous how she kept everything,” said Lorraine, who lives in Uttoxeter, Staffordshire.

“It is also such a personal archive to my grandfather and his career in the theatre and movies.

“But it has been in my cupboard for so long now – I would like to see the collection to go somewhere where it can be seen and enjoyed by more people.”

The auction featured a rare example of ‘The Abbey Handkerchief’, a large Irish linen printed handkerchief sold by the Irish Players at $1 each in 1913 as a fundraiser for a building to display Sir Hugh Lane’s gift to Ireland of great paintings in his collection.

Illustrated with a group scene of the players and individual portraits, the print has signed signatures in the cloth including WB Yeats. 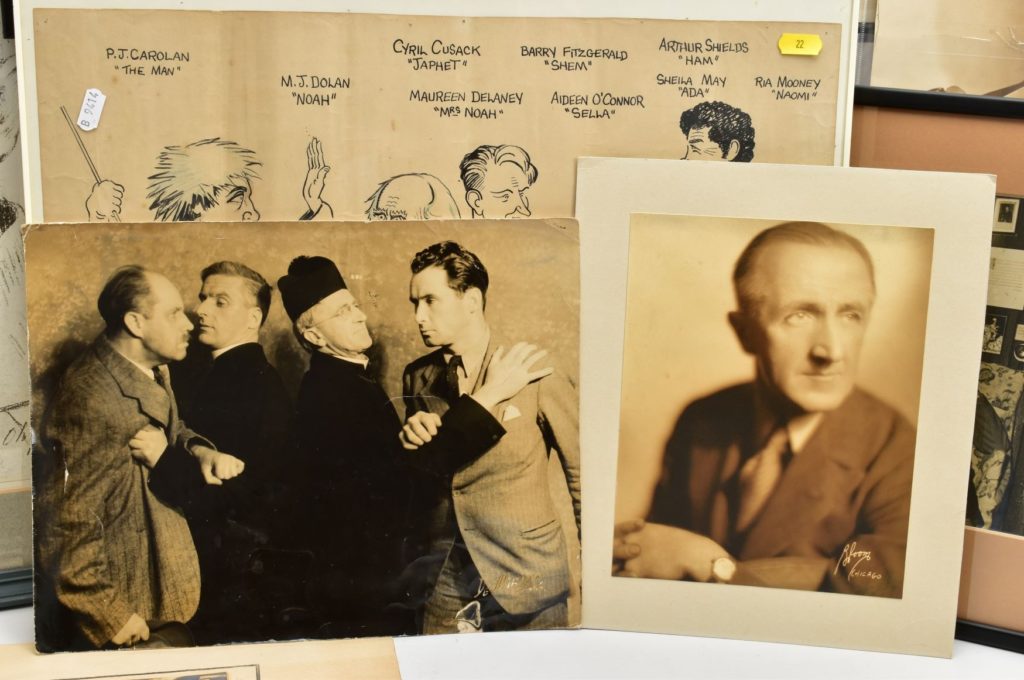 There was also a collection of autographs, signed photographs of the players – including one with WB Yeats – plus signed photographs from James Cagney, Jack Dempsey, Shirley Temple and Jack Warner – the Dixon Of Dock Green star appeared in 1951’s Scrooge with Dolan and was a personal friend of the family.

An autograph book containing individual messages from stars such as Cyril Cusack, Richard Attenborough and Joe Loss was among the lots, as were Christmas cards plus portraits and photographs of Mr Dolan, including one taken while he was touring in Chicago.

While a framed cartoon featuring the principal players in a production of Noah, drawn by Sean Coughlan at the Abbey Theatre, includes Mr Dolan in the title role plus Cyril Cusack and Barry Fitzgerald, both of whose acting dynasties continue today.

The sale also included Twelve Nights at the Abbey Theatre, a signed limited edition of drawings of performances by Grace Plunkett, issues of The Arrow magazine edited by WB Yeats from 1906, 1907 and 1909 and original programmes dating back to 1922. 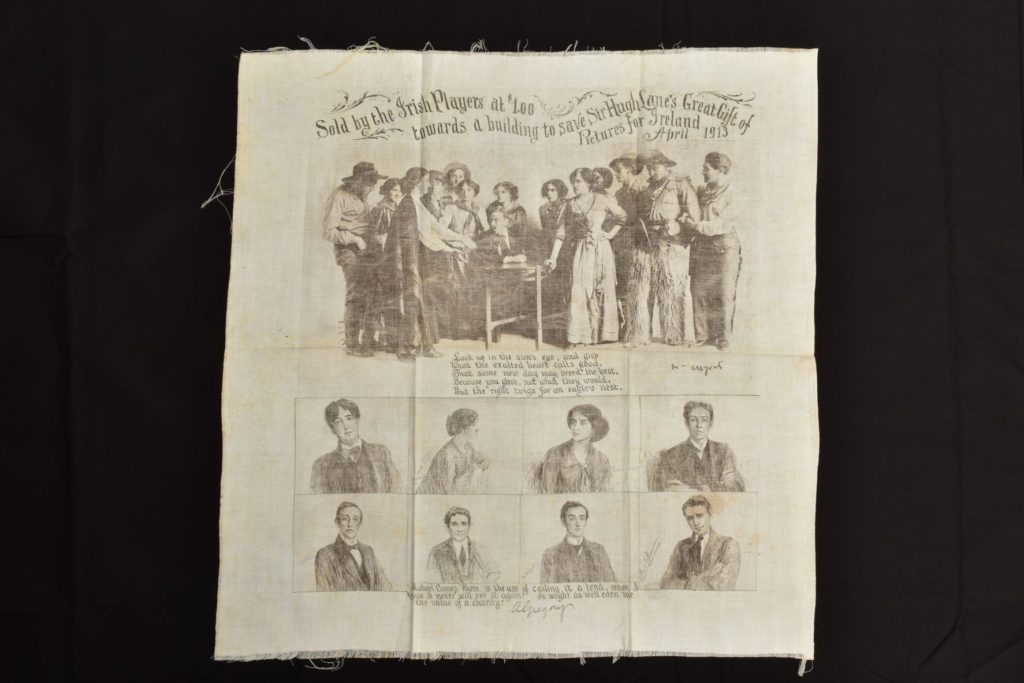 The collection drew international interest at auction, and all five lots sold for a total hammer price of £1,080.
Rob French, ephemera specialist at Richard Winterton Auctioneers, said of the sale: “The Abbey Theatre is arguably Ireland’s leading cultural institution, operating through a pivotal time in the country’s history.

“When I first started going through the collection I thought it was a unique snapshot from a period when this great artistic institution was building up a strong reputation, especially in America, where its performances helped US audiences reconnect with their Irish heritage.

“But it is such an eclectic and comprehensive collection it was easy to go off at tangents and discover more of this wonderful history – from early programmes and drawings of performances to the personal elements relating to Michael Dolan and his links to Hollywood movies.

“What a bustling enterprise full of tremendous characters the Abbey must have been.”