IRISH Hollywood star Colm Meaney has described his latest role as one of the most important of his career.

Meaney’s portrayal of the late Martin McGuinness in new film The Journey earned him the IFTA for Best Actor in a Lead Role in Film in Dublin last weekend.

The iconic Irish actor, whose early cult Irish performances include the dad in The Snapper, The Van and The Commitments, said the movie was 'more than just another job'.

Scroll down to watch...

“You know every once in awhile in this job, you get a chance to do something that is significant, that means more to you than just another job. This was one of those projects," he said of the film, which hits cinemas in June.

"When I read the script I knew it was an important piece of work, it meant a lot to me personally, and it recognises and celebrated a very significant event in our history.

"It also gained in significance as time went on, as events overtook us, particularly with Martin’s death.

"It was very moving when Martin died, we lost, I think, a great Irishman, and I hope the film in some small way contributes to the recognition to his life and work.” 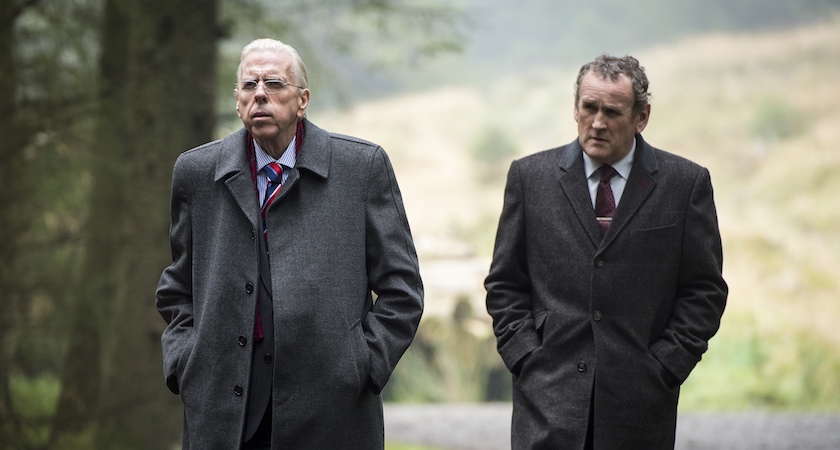 A scene from The Journey starring Colm Meaney and Timothy Spall

But political drama The Journey, directed by Nick Hamm, has come at a huge juncture in the real-life narrative of Northern Irish politics, with the recent passing of former Deputy First Minister Martin McGuinness.

Meaney portrays McGuinness in a script from Northern Irish talent Colin Bateman, who has re-imagined the intense car journey between the politician and his lifelong enemy Ian Paisley, brought to life by Harry Potter actor Timothy Spall.

Freddie Highmore (Bates Motel) plays the undercover MI5 driver who stages a minor accident to buy McGuinness more time in breaking down the cold exterior of his fellow passenger, and making unprecedented progress on the beginnings of the Good Friday Agreement.

Director Nick Hamm said: “The Irish have a great sense of humour above everything else and we wanted to try and import that into the movie in some way.”

Watch Colm Meaney talking about his role in new film The Journey...