FOLK favourites Derek Warfield and the Young Wolfe Tones have been busy touring the country this month – bringing their unmistakable sounds to fans in London, Portsmouth and an excited audience at the Irish World Heritage Centre in Manchester. 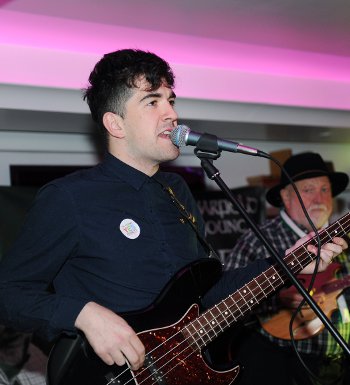 The Irish Post caught up with the band at popular London Irish watering hole, the Watkins Folly bar in Wembley.

Band leader Derek Warfield wears many hats, as an accomplished musician, author, song-writer and historian, but will always be remembered as a founding member of the original Wolfe Tones.

Having left the band in 2001 (after 37 years!!) he soon found himself on the road again with the Young Wolfe Tones – who have enjoyed something of a remarkable year already in 2015.

One of the highlights, Derek told The Irish Post, took place on St Patrick’s Day, when they preformed for US President Barack Obama, Vice President Joe Biden, House of Representatives Speaker John Boehner and Taoiseach Enda Kenny at the Congressional Friends of Ireland luncheon on Capitol Hill, Washington.

And 2016 is set to be another belter – as the band will lead an American tour party on a 10-day journey around the historical sites and landmarks of Ireland to commemorate the Irish Rebellion of 1916.

ABBA reunite in London for launch of virtual Voyage show