DOWNTON Abbey actress Michelle Dockery has become Oxfam’s first ever humanitarian ambassador – a role that will see her highlight the charity’s work around the world.

Last year Michelle, whose father Michael is from Athlone, Co. Westmeath, travelled to Jordan to meet with Syrian refugees affected by the conflict there.

Since her trip the second-generation Irish actress has auctioned her EMMY Awards dress to raise funds for Syria, and more recently supported Oxfam’s appeal to get emergency aid to those in desperate need in Gaza.

“Travelling with Oxfam and meeting families whose lives have been torn apart by the conflict in Syria, stripped of everything they know – just trying to get by each day with the very basics they need to survive – was utterly heart breaking,” Michelle said.

Today’s announcement (August 19) coincides with World Humanitarian Day, which aims to recognise and celebrate those who face danger and adversity in their work helping others. 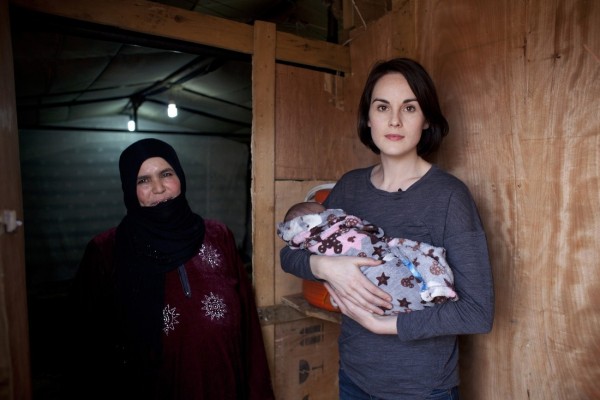 Michelle Dockery meets Um Firas who lives in a tent in Jawa in the South East of Amman where many Syrian refugee families are living in tented settlements.

There are currently over 28million people in need of humanitarian aid in the Middle East, while Oxfam’s work also includes humanitarian responses in South Sudan, the Central African Republic, the Democratic Republic of Congo and Somalia.

“It is clear that the world is currently experiencing a huge number of humanitarian emergencies and there are millions of people who are suffering as a result, with nowhere to turn and in desperate need of support,” Michelle added.

Mark Goldring, Oxfam’s CEO said: “Michelle’s contribution to helping raise vital funds for Syrian refuges and awareness of their situation over the last year has been unwavering. She is passionate, empathetic and eager to learn more about how we work to support in the best way she can.