Eagle eyed viewers spotted something amiss with Taoiseach Enda Kenny and the Gard behind him at Saturday's All Ireland Final Replay. (Credit ©INPHO/Morgan Treacy)

WHILE it might not have been a great day for Mayo at Saturday's All-Ireland Final replay, eagle-eyed fans did have some fun when they spotted a doppelgänger for Taoiseach Enda Kenny.

A staunch Mayo fan, the Taoiseach - who even recorded a special message for fans prior to the first All-Ireland final - turned out in his notable Mayo tie.

But not even the red and green stripes could distract viewers from the uncanny resemblance of the garda standing behind him in the stands.

Scroll down to see how Twitter reacted to Taoiseach Enda Kenny's lookalike... 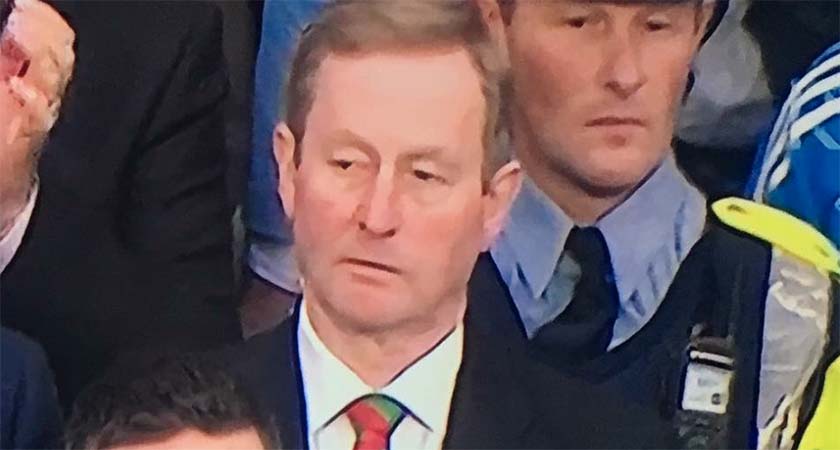 Viewers spotted something strikingly similar about Taoiseach Enda Kenny and the garda behind him at Saturday's All-Ireland final replay. (Credit ©INPHO/Morgan Treacy)

While some deliberated whether or not the Taoiseach had a clone, others had some Matrix-themed explanations for the likeness between the Taoiseach and the garda.

See their hilarious responses below...

Enda has a back up for when his mojo is running low #DUBvMAYO pic.twitter.com/3rf8UMulvq

The puss on #Enda and his clone guard behind him #DUBvMAYO pic.twitter.com/nojpHTV08C

After losing today, Enda Kenny is beside himself in a Garda uniform #AllIrelandFinal #DUBvMAYO pic.twitter.com/JdJl5grGE9

Bit of a Matrix malfunction at the #DUBvMAYO match earlier. Of all the places to try out the new Enda Cop clones. pic.twitter.com/9pyZkXEevb

QUIZ: Is this a real Donald Trump quote?