“HUMAN nature is a mystery that logic alone cannot illuminate,” is the rueful conclusion of an ageing Sherlock Holmes in Bill Condon’s Mr Holmes, a movie that shows even the sharpest minds fall into confusion.

The title character is played by Ian McKellen, but it’s a different Sherlock to the one we know. Far from the familiar sharp-thinking Victorian detective, McKellen’s Holmes is 93 and fearful of his fading acuity.

The film is adapted from Mitch Cullin’s novel A Slight Trick of the Mind, one of several narratives that refashions Arthur Conan Doyle’s hero, in what is now a small cottage industry.

The Holmes that Condon reveals to us here is unrecognisable from Conan Doyle’s original confident logician and is instead a regretful recluse who fears his own mind might be betraying him.

The story finds Holmes far removed from the vibrant Victorian bustle of 221b Baker Street.

Instead, he languishes in self-exile on the Sussex coast in the period just after the Second World War. There he tends to his bee hives with only his housekeeper Mrs Munro (Laura Linney) and her young son Roger (Milo Parker) for human contact.

Long retired from detective work, he becomes tormented by his final (unsolved) case from some 20 years before.

This involved a worried husband (Patrick Kennedy) searching for his disappeared wife (Hattie Morahan), a mystery Holmes failed to explain. He’s writing his memoirs but finds that his ailing memory cannot account for the unsettling emotions he’s feeling. 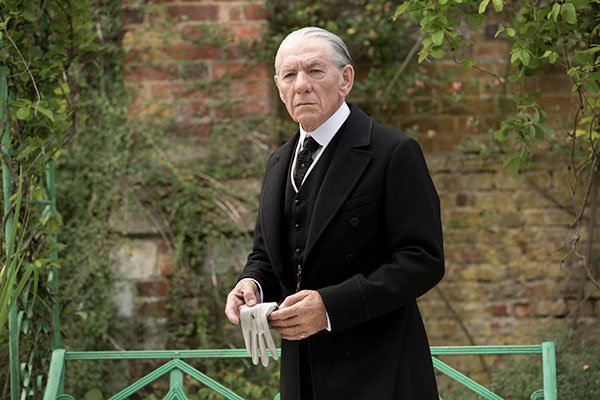 The movie’s dramatic question turns on whether Holmes can finally solve the case before time runs out.

Condon’s catalogue indicates an interest in characters with an ambiguous insider/outsider status. His subjects are often mavericks who are semi-respected but also viewed sceptically by establishment forces.

Also with McKellen, Condon made the ironically mischievous Gods and Monsters (1998), a study of Hollywood icon James Whale. An innovative director of the horror genre, Whale was one of few film-world figures to be openly gay.

Whale made the classic Frankenstein (1931), which ambiguously and intentionally showed Mary Shelley’s Creature (Boris Karloff) as a misunderstood outcast. Whale’s movie implied that being scorned by society for being unusual can lead to monstrous behaviour, a controversial idea even today.

Coming from a conservative Irish-American background, and gay himself, Condon is unsurprisingly drawn to stories of hidden secrets and repressed drives. Growing up in a comfortable New York Catholic neighbourhood he was torn between propriety and protest. Condon once told an interviewer that before going to college he never met anyone who wasn’t Catholic.

At 59 he still seems to be quietly challenging his family neighbourhood’s values. His gentle narratives do not hit the viewer over the head with any ‘message’ but closely observe a character’s experiences of feeling shut out but wanting to belong. Condon’s former partner Ryan Murphy, from a similar Catholic background, mines the same seam with TV hits The New Normal and Glee.

Though born in Edinburgh, Conan Doyle also came from Irish-Catholic society. A liberal of his day, Conan Doyle questioned Victorian views on homosexuality and spoke up for the publicly scourged Oscar Wilde and Roger Casement.

Mr Holmes is released in Britain and Ireland cinemas on Friday, June 19.