God it's lovely out: Some of the best Irish reactions to the rapidly approaching Storm Lorenzo

WITH EX-HURRICANE Lorenzo almost at Irish shores, people across the country have been preparing-- a lot of which involves stock-piling bread, making jokes and praying for a red weather warning so they can go and watch the rugby world cup.

Almost every Irish person will admit that, as a nation, we are a bit obsessed with the weather at the best of times.

So, when a major storm such as Lorenzo approaches, we do tend to go a bit mad.

Here are some of the best Irish reactions to Storm Lorenzo.

Dublin Fire Brigade educating people on the best way to keep their trampoline in their yard (Spoiler alert: Using your small child to hold it down is not recommended).

❎ Don't use small children to weigh down the trampoline

✅ Do secure it using blocks or other heavy anchors#StormLorenzo #Lorenzo pic.twitter.com/sS7eECpjRY

Supermarket chain Centra dive right in with the bread jokes-- Brennan's, of course.

Everyone in Ireland waiting to see if they get a day off tomorrow...😂#StormLorenzo pic.twitter.com/TL7XHP2Fh2

Seriously, give us that red weather warning!

But sure tis a lovely day all the same.

It's important to stock up on necessities

Irish people running to the shop for Brennans, Tayto, teabags and milk before #StormLorenzo...🍞☕🥛 pic.twitter.com/utzMC437eU

You know it's getting serious when a twister is spotted in Ireland!

Could Brennan's bread have purposely created this storm for advertising purposes?

But it's not all fun and games.

Ireland's shamefully high homeless population-- over 10,000 people-- could be sleeping rough during the dangerous weather.

Several homeless charities such as Homeless Dublin and the Simon Community have activated their Extreme Weather Protocols and have encouraged people to alert them to anyone sleeping rough.

We have activated our Extreme Weather Protocol in response to #StatusYellow #StormLorenzo https://t.co/gSxnk6X35I Please continue to let us know if you see someone sleeping rough in Dublin https://t.co/0uctKrqUit … This helps #OutreachDublin teams reach people quickly pic.twitter.com/aeKHUXzbx8

We love the bread memes, the sarcasm and the possibility of a guilt-free duvet day, but there is a weather warning for a reason.

Stay safe people-- and remember the words of Teresa Mannion. 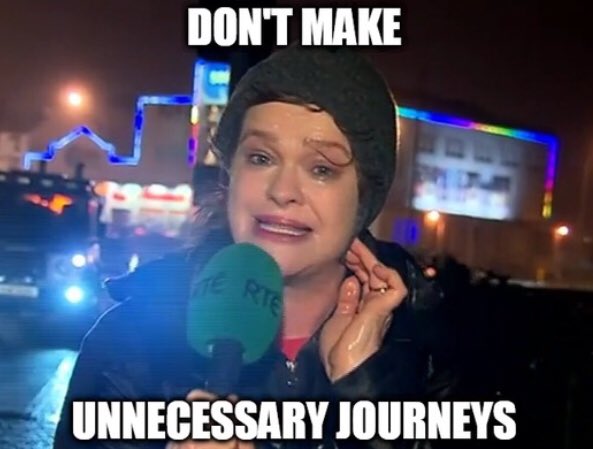