BRIDIE MONDS-WATSON, aka Soak, is an 18-year-old singer/songwriter living every musician’s fantasy.

She’s got the cool indie record label deal with Rough Trade, she’s touring the world with George Ezra and Chvrches and enjoying critical acclaim (her name is on just about every ‘Ones to Watch’ list out there).

All this and she is yet to release a full album.

Today, the Belfast-born, Derry-raised teenager is sleepy. She’s been on the promo trail for the last few days and was up until 4.30am making a music video in London’s Olympic Park. Tomorrow it’s another uncivilised early morning start to fly to Holland to play Eurosonic.

Things have been hectic like this for a while, she explains.

Summer was a “crazy” whirlwind of festivals (Electric Picnic, Latitude and Glastonbury, where Billy Bragg introduced her on the Leftfield stage). Then it was straight in the studio to record the new album, which will be realised in June (no exact date has been announced yet).

“It’s all a bit strange still,” she says sounding half awake.

Monds-Watson started writing songs at 13. She played in a covers band called That’s What She Said, but they spilt “because we were all 13 and not really that committed”.

At home, she was “secretly making demos”, written and recorded in her beloved bedroom, unbeknownst to her parents.

Both Monds-Watson’s proud mother and father are what she describes as “proper musicheads” who brought her up on a diet of everything from Pink Floyd and Joni Mitchell to Beethoven.

To impress her dad (a “great guitarist”) she swotted up on Pink Floyd knowledge and made the guitar her “first hobby”, one she has clung to ever since.

Music became a confession, a way to talk without bringing anything up. “No one wants to talk to their parents,” she says thinking back, but when she did play for them, they didn’t believe she had written the songs herself, so she showed them more.

We’re talking about regular teenage angst and awkwardness here, but also about Monds-Watson coming out to her parents at a young age. Her sexuality is something she feels has had far too much attention already, what she wants to talk about is the music.

It was never meant to be a career option, however the more she shared (one Christmas when she had no money everyone got a five-track demo as a present) the more it took hold.

The attention, the reaction from crowds when she played was unexpected, but she wasn’t going to let it pass. “It wasn’t a plan, when we saw it happen, we let it,” she says, typically understated. 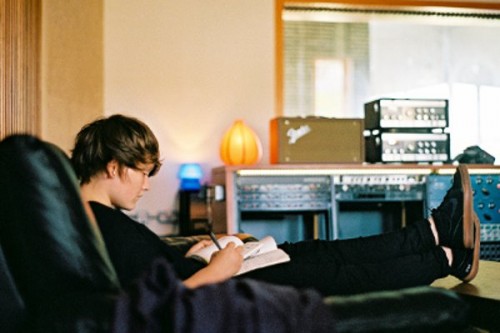 Singer/songwriter Soak has been crafting songs since she was 13 (Photo: Partisan PR)

At 14 years old Monds-Watson entered Chordblossom’s Kickstart competition and won the chance to record an EP, but there was never any temptation to go down the X Factor route to get noticed.

“Definitely not, 100 per cent no. I hate all that. The whole idea is just so fake. It’s not even related to music. Dead set against it,” she says without hesitation.

As Soak (the name, which is a portmanteau of soul and folk, doesn’t really fit but she’s stuck with it now) she released two EPs in 2012, Train and Sea Creatures.

Soon, music started to get in the way of everything else. She played a gig 20 minutes before sitting her GCSE biology exam and struggled to keep her head down at school.

“It’s really hard to go back to school after going on tour with someone or playing with Snow Patrol,” she explains. “Pretending you want to be in school when you’ve got all these other opportunities.”

After school, she enrolled in a music course in Derry but only lasted five months “before they kicked me out because I was never there”.

Strong-minded as she comes across, Monds-Watson certainly isn’t sad (as her melancholy songs might have you believe).

She’s refreshingly no-nonsense and likes a laugh (see her Twitter account which she manages herself for evidence). Yet she is sparing with her words. There is a power in her expression when she talks as well as when she sings.

For example, in the opening lines of the single B a noBody (which has over two million plays on Spotify): “The teenage heart / Is an unguarded dart / We’re trying hard /To make something of what we are.”

The lyrics come easily enough, she admits. “I have a stream of consciousness and I organise it. It’s usually quite confessional and honest. I think that’s why people can sympathise with my music, because of the honesty in it.”

Is it hard to be open and honest? “It depends what you are writing about. It’s your own song so you get to decide how everything is presented. You can be honest but hide things behind other words. You can be smart with your arrangement or say it dead straight. Everyone has their own barriers about what they are willing to talk about publicly.”

Soak’s sound is hard to put your finger on. Her songs have youth and innocence, yet musically she’s wise beyond her years. Her vocals go from clear as a dewdrop to muffled and obscure; she sounds like she could be a ghost from the past or an ethereal voice from the future. After several listens I conclude listening to Soak is like listening to Björk, if she took a Xanax and hung out in Leonard Cohen’s bedroom for the afternoon. Even she can’t describe it…

“If I was Mumford and Sons it would be so easy because I could just say ‘folk’, but my sound changes all the time. I always get tied in with folk, which makes no sense because there’s nothing folk-ish about my music other than lyrically. It doesn’t rely on folk melodies. It’s just typical — female singer/songwriter, you just throw her in that category.”

“Maybe,” she decides eventually, “it’s indie... ish, a relaxed version. I hate trying to call it something.”

While her sound is changing, so too is the way she works. Over the past couple of years Monds-Watson talks about how she’s gone from having her parents managing her to professional managers, radio pluggers and booking agents.

“I’ve got a big team now with a record label on board… it pushes everything more.” The Rough Trade team have been “helpful and positive”, she says. “They let their artists do what they want do… I’ve got complete artistic integrity.”

An old head on young shoulders she may be, but 18 is still young to be living out of a suitcase on the road and her parents worried initially. “Someone so young, going off and living on your own, in what’s classically known as a bad industry. You meet some dodgy people. I think they were wary, but they trust me and my managers are very good people.”

Sometimes though, her mum can’t help just be a mum. “I’ll be waiting around at an airport for too long and she’ll call me and she’ll be sad on the phone.”

When she does get time at home in Derry, it’s spent talking to her family and hanging out with her friends “trying to catch up on what I’ve missed”.

Those friends, who have witnessed Soak’s ascent from the beginning, are delightfully nonplussed about her fame and critical acclaim. “They are really quite causal about it. I’ll tell them I’m going on Radio One and they’ll be like ‘Cool, who with?’”

Surely hooking them up with backstage passes to festivals like Glastonbury gets a better reaction? “Oh they love that!” she says laughing a little.

Talk and interest about her look and image leaves her equally bemused. “I dress as I like and I don’t try to conform; I never followed a style or anything,” she says. From age 12 to 14 she went thought a phase of wearing bandanas around her neck, but other than that she thinks the way she dresses is unremarkable, like any of her friends.

Monds-Watson is more comfortable talking about her new album. It’s finished, and she is happy and “very proud” of the result. As for what to expect, she describes it as “a reflection of my life since I was 13. The songs span from that age to now.”

I wonder if 13 seems like a long time ago? “I feel like 17 was a long time ago,” she jokes. “There’s been a lot crammed in… it’s hard to pinpoint time at the moment.”

Does she think she’s matured fast? “I think I had to, because it’s more an adult business really. You’re talking about money and signing contracts; I had to grow up quite quickly in order to understand and to look after myself. But then I’ll go back and see my friends and we’ll just be really immature and act like seven-year-old kids.”

If she’s handling the success well, she’s not sure.

Sounding closer to her age, Monds-Watson says she doesn’t read the schedules her management sends and then often gets calls asking where she is, and she has also been known to miss the odd flight, but at the same time she seems all too aware of the responsibility on her shoulders.

“You can’t really mess around. When you have a team around you, you can’t let them down. People rely on you, so don’t be an ass,” she concludes, giggling to herself. Like every other teenager, it sounds like she’s figuring it out as she goes.