Monica McInerney, author of The Godmothers

BORN in Australia and now based in Dublin, Monica McInerney is a million-copy bestselling author of 12 novels.

In 2021 she is celebrating 21 years of being a published author - and a huge seller in Ireland, where she has lived for thirty years.

Her latest novel The Godmothers is a comedy drama, family mystery and a story of moral dilemmas.

It was inspired by her relationship with her two Godchildren, the changing nature of Godparents in the 21st century, and the family secrets one of Monica’s own Godmother took to her grave.

This week Ms McInerney took time out to talk to The Irish Post...

Rather than working from my attic office in Dublin, I’m in Adelaide, South Australia. I came here for a month in late February 2020 and have been Covid-stranded since.

I’ve enjoyed all 55 years, but the decade when I was aged 17 – 27 was especially action-packed.

I left home (the Clare Valley of South Australia) and moved to Adelaide, where I worked in children’s TV for 2 years. I then moved to London, aged 19, and worked for Irishman Vince Power’s Mean Fiddler in Harlesden for two years, behind the bar and then in the office.

For a music lover, it was heaven, especially in regard to Irish bands. I returned to Australia aged 21, briefly worked in Sydney in the music industry then moved to Melbourne and got a job in book publishing, meeting Roald Dahl among many other great authors.

At 23, I was told by a psychic that when I was 25 I would meet an Irishman 10 years older than me. My sisters and I dubbed him Captain 25. Three months after my 25th birthday, a journalist friend told me ‘a quiet sad-faced Irishman’ had started working with her and she thought he was perfect for me.

He and I met at a pub in Melbourne, talked all night, met for lunch the next day and have been together ever since, 30 years later.

Lake of Shadows by Moving Hearts, especially the sudden surging key change at the end. I heard it for the first time as a 17-year-old while working at the TV station in Adelaide.

It was being used to soundtrack a film and suddenly played loudly in the dark studio. I remember stopping still, so affected by it. Eight years later I met my Irish husband, who was born in Buncrana, by Lough Swilly, the Lake of Shadows in question.

I can’t choose one place. I love Dublin’s Phoenix Park. Mount Errigal in Donegal. The Hill of Tara and Trim Castle in Meath. The Burren in Clare. Westport. Galway…

I try not to get angry. I already have high blood pressure. I stop at cross.

The Railway Children by E Nesbit. My dad was a railway stationmaster so I always felt my six brothers and sisters and I were the ‘real’ railway children, and I resented that book. Until I read it, and fell in love with the characters, the drama and the setting.

In April 1999, hearing my father had cancer and less than a year to live. He died on March 15, 2000, and was buried on St Patrick’s Day, on a 40-degree day in the Clare Valley of South Australia.

Nothing. I’ve had sad and difficult times, grief, sorrow and disappointment but each one has been counterbalanced by love, joy and happiness. If I took out one ingredient it might all collapse.

Everything changes. All things pass.

The Sound of Music. I grew up being told that Mum and Dad went to see it back in the 1960s, then came home very taken by how romantic it was. Nine months later I was born.

It was only last year I did my sums and realised the release dates didn’t match. I still love it. My family was obsessed with it, watching it countless times.

As a child, I loved it for the kids and the music. As an adult, I love it for Christopher Plummer’s looks and the Baroness’s clothes. 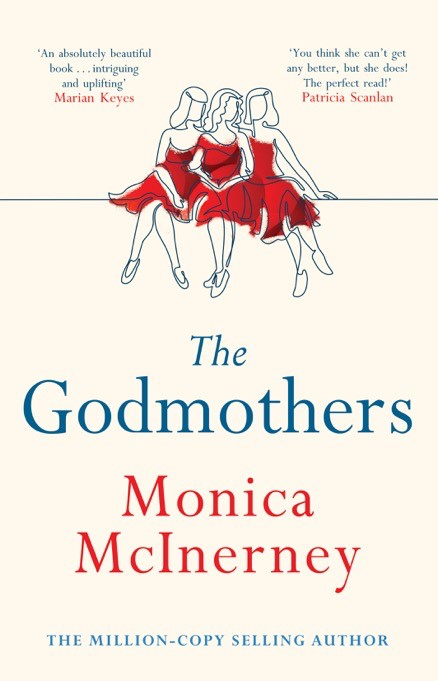 The Godmothers by Monica McInerney was released in January

Asking too many questions.

I (usually) live in Drumcondra on Dublin’s north side. The best is how close it is to town. I can walk to the GPO in less than 15 minutes. I also love being so close to Croke Park, hearing the roars of the GAA crowds and the stadium gigs in the summer.

I wrote a chapter of my new novel The Godmothers while the Spice Girls were doing their soundcheck. The worst thing is it is more than 16,000 kilometres from Australia where my Mum and family live.

Campari and soda and Tayto crisps by the fire at the end of a long week of writing or editing.

The Godmothers, published by Welbeck, is available to purchase now. For more information click here.