ZAYN Malik's decision to leave One Direction may leave an Irishman out of a job.

Malik impersonator Jamie Searls, who is from Kinsale, Co. Cork, but based in London, joked on Twitter that he may be kicked out of 1D tribute band Only One Direction, after his alter ego announced his decision to leave the boyband after five years. 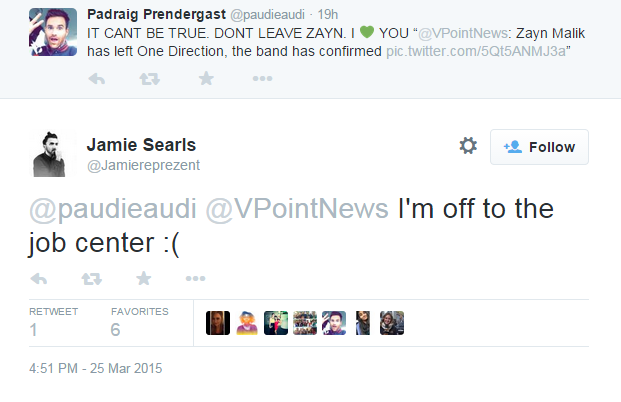 22-year-old Zayn will no longer take to the stage with his bandmates, including Mullingar man Niall Horan, citing “private time out of the spotlight” as his reason for quitting the band.

‘Directioners’ reacted with shock and anger to the decision – with fans across the globe taking to social media to express their grief.

Zayn hit headlines around the world last week when he was photographed with another girl, despite being engaged to Little Mix star Perrie Edwards.

His decision to leave was prompted by wanting to be a “normal 22-year-old” – but he said he has “friends for life” in Niall and co.

The 1D boys are estimated to be worth £15 million each – so Zayn is bowing out on top, by all accounts.

The remaining members last night performed without Zayn for the first time - and Niall Horan described it as a "mad few days".

Been a mad few days and your support has been incredible as per usual ! This in turn Spurs us on to make the best music we possibly can