Jared Harris on his father Richard Harris and The Quiet Ones

HE has starred opposite Daniel Day-Lewis in Lincoln and appeared alongside Brad Pitt and Cate Blanchett in The Curious Case of Benjamin Button.

In 2012, he earned his first Primetime Emmy for his performances as Lane Pryce in the award-winning drama Mad Men. He has had a career… he is Richard Harris’ son.

This morning Jared Harris is elegantly dressed in a smart suit. The fit is as neat as you’d find on a mannequin in an Oxford Street window. Soho’s neon has faded to day and light streams through the window of a large lounge room located off Richmond Mews.

Yet his relationship with his father, more than his career, feels like the between-the-lines narrative to pursue.

Does it bother him? That he is defined as much — maybe even more — for who his father is compared to what he has achieved?

“I love my dad. I’m very proud of him,” he says. “I miss him and I’m proud of everything he did for me. Obviously he exposed me to this world and his enjoyment of it and his fascination with it, so not at all!”

Really… even after some of the marks you’ve hit in your own career?

Having most probably answered a conveyor belt of similar soundings through the morning — “and most people have been asking a lot of same kind of things” — disclosed the PR girl earlier, the interview shifts gear.

The answer is solid, testament maybe to the enormity of his late father’s personality.

“You didn’t really witness it properly on screen. He had to rein himself in for the camera. When you got closest to seeing that personality was on some of the talk shows he did, or on stage. He was able to exercise most of his personality when he did that.”

His father’s personality has been fairly presented by the Press he says: the larger-than-life extrovert with a form of celebrity that shouldered a not-so-private beat in the city’s public bars.

“He was great, he was great fun. He was a lovely man and dad,” says Jared. 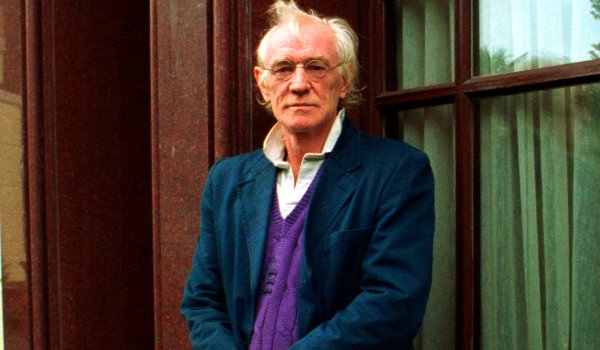 ‘What memories stick out?’ you ask.

“There’s a lifetime of memories: Christmases, holidays in the Bahamas, him coming to visit us at school, visiting him on set, going out on the piss with him, being in restaurants and he would tell stories and the whole place would stop and eventually applaud the punchline at the end. He was a huge, huge personality… HUGE.”

But so does Harris mention the other side of his personality, not so readily presented by the Press: “He was a very very thoughtful man; he was highly intelligent; he wrote poetry all his life; he was a voracious reader; he was extremely well informed in terms of his absorption of news and media.”

If there is regret for Jared Harris he explains it’s that he didn’t get more opportunity to work with his father. He reflects on an opportunity to make an early mark playing the Bull McCabe’s son Tadhg in Jim Sheridan’s The Field.

“I spoke to Jim Sheridan about it and they were looking for someone to play that part. I was probably too inexperienced in terms of camera work but we had a conversation about it and your first film role is such a big deal and I felt a little bit uncomfortable that I was going to get the job because I was his son.

“Jim felt a little bit nervous about it. He didn’t want people to think Richard Harris was casting the movie — I think there was a little bit of cold feet on both our parts.”

But he adds: “I regret never having worked with him properly. We did Hamlet together but we filmed his part and screened it each night. I had a brief period but I regret that not having happened.”

Much has happened since — all that has been name-checked in the top in the opening paragraph. Now there’s his latest movie, The Quiet Ones, a dark story based on a real-life college experiment to stimulate and harness negative energy which might manifest into what we term a poltergeist.

“The original experiment was successful and it was only energy produced by other people. Crucially, the role of the moderator — my character — his main function was to end the sessions when anything sinister or unpleasant took a turn. He’d stop the session and send everybody home.

“But in this case the whole idea is to keep going when that happens. But it was a real experiment and it was successful. And he wasn’t saying that paranormal events couldn’t be instigated or inspired from supernatural sources but he could show that some weren’t — that was as far as he would go.”

A self-confessed sceptic, Harris says he has never had an “experience” of the supernatural kind.

“But I know people who have,” he interjects. “And I believe them that they have had an experience. I talked to them about it, what they thought it was; what their explanation was for it.”

In the movie science battles the supernatural but with the advances being what they are today, could it be the case that the unexplained has become much easier to explain, and is it to mystery’s cost?

“There are fantastical elements of science and in theory what people are inventing are equally as fantastical as magic bushes… they are extraordinary. The idea that say we are living in a multi-verse [for example] is an extraordinary concept. That is as magical or fantastical as a ghost.”

Yet away from this role, Harris is a realist with a roll-up-the-sleeves attitude inherited from his father.

Pulled back to the personal he says: “We would talk about classic roles and interpretations of Shakespearean roles and stuff like that in terms of an acting career, it’s all about momentum and keep it going.

“My Dad had a passion for working and he was working right up to the day he died.

“The best piece of advice he gave me was to keep it going.”

The Quiet Ones is in cinemas now