AHEAD OF the release of Maze on DVD, Irish actor Tom Vaughan-Lawlor spoke with The Irish Post about his experience depicting an IRA member during one of the most significant events of the Troubles.

Tom Vaughan-Lawlor has been fine-tuning his craft since his Drama Studies days at Trinity College, Dublin.

Diversity has been a recurring theme of his career. Perhaps best known for his widely celebrated role as Nigel 'Nidge' Delaney in RTE series Love/Hate, the Dundrum native has played characters as wide-ranging as former Taoiseach Charlie Haughey and an upcoming appearance as a Marvel: Avengers villain.

In the last year, Vaughan-Lawlor has graced film and tv screens alike with roles in popular BBC series Peaky Blinders and in American crime drama The Infiltrator alongside Bryan Cranston.

He had the pleasure of returning back to his homeland last year to tackle one of modern Irish histories defining moments, alongside an innovative director and writer, Stephen Burke.

Based on the true story of the mass escape of 38 IRA prisoners from HMP Maze near Belfast in September 1983, Maze is described by most as a thrilling flick, but it's the strength of depth provided by both Vaughan-Lawlor's performance and Burke's writing, that puts this film on the same shelf of many other big screen depictions of historical events.

The film has been much talked about since it's cinema release last September, but with the arrival of its digital release and its DVD release next week, Vaughan-Lawlor revisits the experience of playing the mastermind of the escape, the late IRA member Larry Marley.

The was released in cinema's last September, how do you feel the reaction has been to the movie so far?

Its performance at the box office has been really exciting. I think it’s also exciting that its politics has been commented upon and the presentation of the two sides of the conflict has come across very clearly. That makes me happy, that it hasn’t been skewed. Stephen, the director and writer was very careful that he was telling a story about two sides. I’m glad the clarity of that has come across.

The film was shot at the decommissioned Cork city prison. What was it like as a lead actor to be in that setting?

You can’t buy that. The set can only do so much. When you're actually in a building that was a real prison, it has history in its walls and it has energy that you cant really buy. We were very lucky to get that prison. The prison is a massive character in the film so we were blessed to get that location and it really helped us. 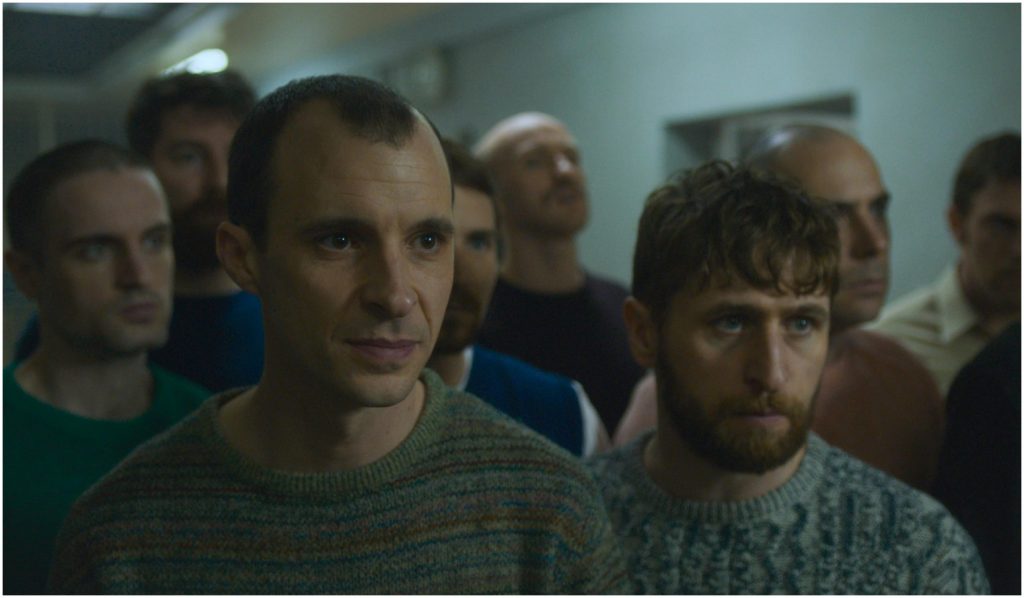 Am I right in saying it had just been recently decommissioned when you guys started shooting?

Yeah, that’s right. We started filming in April and the last prisoners had been moved in February. So literally a few weeks. We were very lucky to get it.

Was there an atmosphere still in the air of a functioning prison? If so, did that influence your performance?

There was still stuff around and it was still vaguely active I suppose. There was nobody there, just a few guards there and caretakers. Whether or not you believe in energy is one thing but I think a building like that certainly has an energy to it and you can still feel it.

When the movie opens you’re immediately referenced to the hunger strikes which took place just prior to this event historically. What was your knowledge of the event before the project came about and what was the research process?

I knew about the hunger strikes, but I didn’t know much about the escape and I didn’t realise the scale of it until researching it. Speaking to my Dad he told me it was a huge thing. I found it interesting that as a plan and an operation, it was a direct consequence of the hunger strike. As a way of honouring the men, as a way of boosting morale and as a way of focusing the mind I suppose. I hope the film gives people a sense of how tough it must have been. It must have been hell.

Your character Larry seems to be battling with two things throughout the film. His lack of communication with his family and son in particular who are dealing with the Troubles outside of the prison and also this deep guilt he appears to have over the ten men who passed away in the hunger strikes. Which had more of a direct influence on his determination to carry out the escape? His personal desire to be there for his son and to stop him from going down the same path or the responsibility he feels to act in retribution?

That’s why the script is so clever and nuanced. You have this internal conflict with his identity as a father and husband and his identity as a political prisoner and a revolutionary and volunteer. That battle within him is what made the script so exciting and what Stephen does is still very subtle. He got us to play it very subtly. I guess that’s a conflict for all of those people who choose a certain life and then they have kids and they experience a tug of war between an ideology and a commitment and a love of their family.

Another theme of the film is the relationship between Larry and the warder Gordon Close (Barry Ward), do you think Larry has empathy for Gordon at any stage throughout the film?

That's an interesting point. I think their characters represent a general empathy amongst both opposing sides. I was reading about the Loyalist community in the Maze asking the Republican community in the Maze for advice on how to educate their inmates and the Republicans giving that advice. There’s a strange kind of connection there. Two warring ideologies can still have a degree of respect for one another. And because they’re such physical conflicts, there has to be some form of dialogue. There has to be communication there and you can only hope that it leads to a certain degree of understanding and compassion. 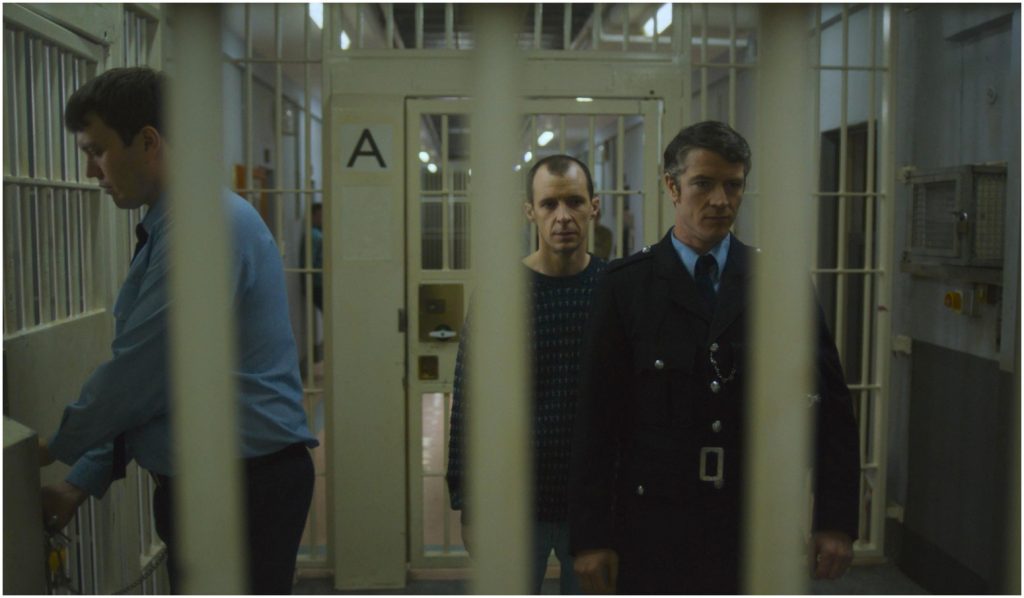 Speaking of Stephen’s portrayal, in the reaction to the movie, some people complained that it was romanticising IRA activity. Do you feel as though Stephen portrayed the story accurately, and did you feel any weight of responsibility yourself in this regard?

I think the actual escape is a context for how we dialogue with each other and figure out how to come to some sort of settlement and how different sides can come to some degree of acknowledgement or understanding of opposition. Some people call it a thriller. I don’t see it as a thriller. The form of the film is based around an escape but the meat of the film is about this dialogue between these two men from different sides and I think that’s what clever. Stephen uses the hook of an escape movie to ask bigger questions. That’s why he’s a great writer.

Now that you live in the UK, did the prospect of coming home to Ireland to shoot a film have any impact on your decision to take the role?

If you get an opportunity to work with really talented people and a part that’s brilliantly written you cant really turn that down. The minute I read it I said to myself; “this is a really smart script. This is a really brilliant characterisation on the page." It’s a great challenge to an actor. Also, researching is so much fun really because you’re learning so much and you’re learning about yourself and a time. It was a great package and I was really thrilled to be on board.

A lot of our readership consists of Irish people living in the UK or elsewhere abroad. I know that you moved to London as a young man to pursue a career in acting. Do you still feel that there is a necessity for aspiring actors to come away from Ireland and to a place like London for those big opportunities? Did that exist for you back then?

I think when I left Ireland which was 18 years ago, it was the Ryanair generation. There were a lot of people getting out. I wonder if people's choices to leave Ireland is also about headspace. I miss Dublin very much but it’s a small city. Sometimes its good to get headspace from a place just in terms of your own identity. I miss it terribly but its exciting to journey outside and push yourself. I think its different now, especially in acting where auditions can be taken on an iPhone and sent around the world. You can film and send an audition to a casting director within an hour. You don’t need to be based where they work anymore. I think this is exciting for people who live in Ireland. The world is getting smaller and hopefully, it means that so many people don’t feel like they have to leave. It’s a great country.

So you don’t feel it has a negative effect on the film industry in Ireland?

I don’t think so. Some people might feel differently but from my own experience, it's exciting to work abroad and work in different environments and then come back and hopefully be able to do good work at home. We have incredible people working internationally and we have incredible people who work at home. We punch above our weight quite extraordinarily in Ireland. We’ve always done that, historically, in our literature and in our drama. When you think about how small of a country we are and the influence we have on the world stage artistically, its quite astonishing actually. I’m really proud to be a small part of that. I love being an Irish actor in England. I love being a part of that wave. It's amazing doing theatre in London and seeing how important Irish drama is to the history of the theatre in Britain. Shaw, Wilde, McPherson, Murphy, all of these amazing writers.

Is there a sense of community amongst the actors, filmmakers and writers in the UK then?

Yeah, it can be very funny meeting Irish actors. You go to an audition and you bump into an Irish actor and there’s a kind of embracing of Irish people here. When you see another Irish person and you banter about Ireland or about being Irish in England it's a nice feeling. I suppose in one way we’re very similar to the British but in another way we’re still very different. I think it comes down to sense of humour. Sometimes we have a very different sense of humour. You say something in a certain way and when it doesn’t land you realise people have different sensibilities which you have to respect too but its also nice to meet an Irish person and have a similar worldview or sense of humour.

What can we expect from Tom Vaughan-Lawlor in 2018?

I’m doing a play called  The Birthday Party at the Harold Pinter Theatre in the West End up until April. Being an actor is a very funny job. Sometimes things are quiet, sometimes things are busy. I've been very busy the last couple of years which is wonderful but it can also be nice to not know what's coming next. After the play, I've got a few tv and film bits and pieces to come out, other than that who knows really!

Maze is available for digital download now and on DVD on 22 January.